(June 4, 2010, Zanzibar, Tanzania) — World class films with an African focus, international music presentations, and stunning natural settings are in store for those cinema and arts lovers attending the 13th annual Zanzibar International Film Festival (ZIFF) July 10-18, 2010. "Tamasha," as ZIFF is known locally, is the antithesis of a Western- style film festival, no red carpets, no glitz. The 2010 Festival theme is Hopes In Harmony. 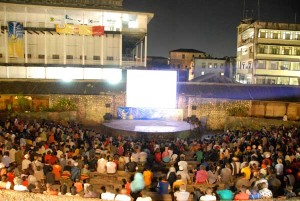 The must see films of this year's festival include Ana's Playground (USA); the award-winning We are Together (South Africa); Imani (Uganda); and Motherland (USA). The festival will also feature shorts from Zimbabwe and world premiers from Burundi, Tanzania, USA, South Africa and Australia. Festival of Festivals Forum. As part of ZIFF's program of events, it will host a two- day Festival Forum, July 15-16, attracting over 30 festival directors from Africa, Europe, the Caribbean and Brazil, to discuss the role and place of festivals in Africa's future development. According to ZIFF's Chief Executive Officer, Dr. Martin Mhando, "this will be an extraordinary opportunity to have an exchange with directors of some of the most successful African film festivals such as Ayuko Babu, Director of the Pan African Film Festival in Los Angeles, and Bruce Paddington, Director of the Trinidad and Tobago International Film Festival." The Forum is being sponsored by the ARTerial Network.

Stone Town, the Festival's venue in Zanzibar, is part of the United Republic of Tanzania and a UNESCO World Heritage Site. This colorful port provides an exotic setting for the 10 days of festivities. No film festival in the world can compete with the spectacular setting of Stone Town's historic amphitheater known as the Old Fort and watching movies under the stars. ZIFF has captivated serious followers of International film and music, students of African culture past and present, and travelers interested in arts-centered fun for over a decade. Originally called the Festival of the Dhow Countries, ZIFF is now not only the largest annual event in East Africa, it is truly one of the most unique in the world. The Festival events in Stone Town typically attract 7,000 foreign visitors and more than 120,000 local guests; while the total number of people attending all the Festival events held throughout Zanzibar and Pemba is 220,000.

According to Dr. Aloyce Nzuki, Managing Director of the Tanzania Tourist Board (TTB) "the annual ZIFF event, which grows in popularity from year to year, also attracts visitors because of the unique opportunity to combine a rich cultural experience with a safari to some of Tanzania's world-renowned National Parks. Short flights from Zanzibar can connect visitors to Arusha, the gateway to the northern safari circuit including the Serengeti and Kilimanjaro as well as the Ngorongoro Crater; and to Dar es Salaam (only a 15 minute hop) the gateway to the South, including Ruaha National Park and the Selous Game Reserve. One of Tanzania's newest parks, Saadani National Park, the only marine/bush park in East Africa, is located on the shores of mainland Tanzania just across from Zanzibar and is accessible by boat. All these create great pre or post Festival tour options."

There is no question that the ZIFF festival can only take place in Zanzibar. The Zanzibar International Film Festival and its rich cultural diversity reflects the essence of Zanzibar itself. Dr. Mhando noted "Visitors are attracted to the ZIFF for its outdoor setting and to celebrate the unique cultural heritage of Africa and the Dhow countries of the Indian Ocean region and their global Diaspora. They also come to enjoy the charm of Stone Town and the miles of white sandy beaches of Zanzibar and Pemba. "

In addition to the Old Fort amphitheater other ZIFF performances take place in the House of Wonders and Zanzibar's Museum of History and Culture. There will also be street performances, including story telling, live music and dance, art exhibits, and a range of film and video industry workshops, seminars, screenings, and social events. Stone Town is a place of festivals, from music to movies to dance. It was selected as a UNESCO World Heritage Site, based on the fact that it is a "fine example of the Swahili coastal trading towns of East Africa. It retains its urban fabric and townscape virtually intact and contains many fine buildings that reflect its particular culture, which has brought together and homogenized disparate elements of the cultures of Africa, the Arab region, India, and Europe over more than a millennium." Retaining much of its 16th Century architecture, one can walk winding streets and stroll to the former Sultan's Palace, the House of Wonders Museum, the Portuguese Fort and Gardens, and the Turkish Baths. Working plantations outside of the city produce spices including vanilla, nutmeg and cinnamon.

Founded in the 16th century as a Portuguese trading post, Stone Town was given to the Sultan of Oman in the 19th Century. It became a major center of the East African ivory and slave trade. In 1890, it became the capital of the new British protectorate of Zanzibar, which also included the island of Pemba. In 1963, Zanzibar became an independent republic, with Stone Town remaining its capital. When Zanzibar then merged with Tanganyika in 1964, it became part of today's democratic United Republic of Tanzania.

Zanzibar Festival Tours.
The official tour operator for ZIFF is Zanzibar Festival Tours. It offers a 10-night program to the Festival from July 12-July 22, including expert guides, VIP passes to festival performances, exploration of Stone Town, and some of the best beaches in the world and opportunities for Safaris on mainland Tanzania. For more information on the tours visit www.zanzibarfestivaltours.com.

About ZIFF
The Zanzibar International Film Festival is organized annually as a non-profit organization whose goal is to protect and conserve the rich cultural heritage of the African region and its Diaspora as well as showcasing the works of modern contemporary artists. In no other festival is there such a unique chance to learn about Africa's cultural past and present in such a relaxed and exotic setting.

About Zanzibar
Zanzibar is part of the East African United Republic of Tanzania. It consists of the Zanzibar Archipelago in the Indian Ocean off the coast of the mainland. There are numerous small islands and two large ones: Unguja (the main island, informally referred to as “Zanzibar”), and Pemba.

A 15 minute flight from Dar es Salaam, or a two hour boat ride, Zanzibar's East coast, has beautiful coral reefs and sand bars revealing small pools of starfish, minnows, and anemones. Up north, ocean swimming, smooth beaches and white sand make for dazzling days in the sun. The port city of Stone Town dominates the west coast. The beaches of Mangapwani, where former slave caves are visible at low tide and nearby Bububu are less than half an hour's drive away. The Chole Island Marine Park is just off Stone Town, as are Prison, Grave, and Snake Islands.

On the south coast of Zanzibar lies the Menai Bay Conservation Area, a sea turtle protection area for the endangered species that come to breed on the island. Roads to the southeast coast take visitors through the Jozani Forest, home to Zanzibar's rare Red Colobus monkeys and a number of other primate and small antelope species.

About Tanzania
Tanzania, the largest country in East Africa, is focused on wildlife conservation and sustainable tourism, with approximately 28 % of the land protected by the Government. It boasts 15 National Parks and 32 game reserves. It is the home of the tallest mountain in Africa, the legendary Mt. Kilimanjaro; The Serengeti, named in October, 2006, the New 7th Wonder of the World by USA Today and Good Morning America; the world acclaimed Ngorongoro Crater, often called the 8th Wonder of the World; Olduvai Gorge, the cradle of mankind: the Selous, the world's largest game reserve; Ruaha, now the largest National Park in Africa; the spice islands of Zanzibar; and seven UNESCO World Heritage Sites. Most important for visitors, the Tanzanian people are warm and friendly, speak English, which together with Kiswahili, are the two official languages; and the country is an oasis of peace and stability with a democratically elected and stable government.