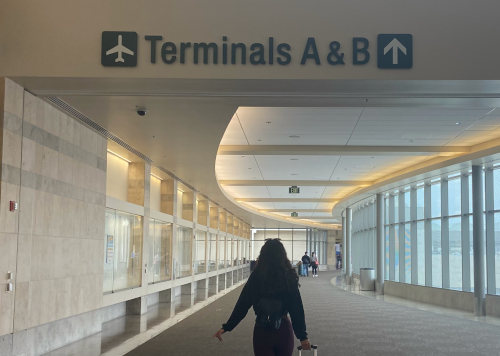 Since I was little, I dreamed of seeing the world. I grew up Googling pictures of ancient sites, making plans for when I was going to visit famous cities, and dreaming of adventures around the globe. I was completely wanderlust. My patience ran out by the time I was 16 and I was ready to divulge myself in new experiences and cultures. While no one else that I knew was bold enough to hop on a plane to a random country, I decided that I did not want to wait until I found a travel buddy. I would rather explore the world solo, meet new people, and find companionship within myself. 8 years and 40 countries later, people are still calling me crazy, telling me something bad is going to happen to me one day, and that female solo traveling is too dangerous.

I am not delusional. I realize that with each trip, I am definitely taking a risk. I go to places where I do not know anyone, sometimes do not even have cell phone reception, and do not speak the language. However, the experiences I have had and the memories that I have made are unmatched and I would not give up my passion of solo traveling for anything. Instead, I aim to encourage women to explore by themselves, lose themselves in a new city, experience the pleasures of being independent, and to live fearlessly. While I do encourage this, I also like to remain realistic. I understand the world is not a safe place for a woman, and there are many fears while traveling to foreign lands without someone by your side. However, after countless experiences throughout my journey’s, some of which have put me in some rather frightening situations, I can definitely say that I have a few tips to encourage you to book your next solo vacation.

Do Your Research Beforehand

Get to know where you are going. What kind of food are you going to eat? What are the people like? What are the country’s crime rates? What is the language? Will you have to rent a car? Can you use public transportation? What is the culture of the place you are going? As a solo traveler, you need to be well versed in where you are about to enter. Depending on where you are going you may need to know how to drive on the other side of the road, you may need to dress differently in order to respect a certain culture, and you may not be able to communicate with locals if you do not speak the language. Therefore, knowing what you are getting into is one of the most important steps in your journey. Throughout many of my adventures my research has allowed me to feel much safer. I have discovered apps such as Airalo, which allows me full access to my phone anywhere in the world. I have also used Google Translate to communicate in many situations. In the places that I have felt uneasy about driving, I have looked into tour guides or public transportation. Most importantly, as a woman I have learned that in many countries, specifically the Middle East, there are rideshare apps, hotels, tourist sites, beach/pool areas, as well as many other attractions that are open specifically for women only. Doing this research allows me to know what to expect.

Got lost in this city a couple times, but would have to say the Scottish were some of the friendliest people I have come across ©2022 Aliyya Zahidi

Stand tall and walk with a purpose. You have no idea how many times people have told me that I look intimidating, and let me be the first to tell you that that is a good thing! It is a proven statistic that people that have their head on a swivel and look like they are frightened, already look vulnerable in the eyes of others. This vulnerability attracts a lot of negative attention and gives people the impression that you are weak. This is why I say to look like you own the place. Confidence is key is not just some cliche. It can get you ahead in many different situations. This also does not mean that if you are confident, you can do whatever you want. Confidence should not be taken for arrogance. It is important to try to maintain a strong stature, while at the same time being aware of your surroundings. Have the city mapped out before you leave your accommodations, stick to populated areas, and take normal precautions as you go about your day.

Singapore, also known as one of the safest countries in the world ©2022 Aliyya Zahidi

Make lists for everything and be responsible! One time while traveling through Ireland, I met another solo female traveler, and once we got to talking she told me that she had lost her cellphone, she didn’t have a laptop, and her cellphone case had her ID in it so that was gone too. I was literally freaking out for her. I thought to myself, “this girl needs to get home immediately!” As most things are electronic now, losing your phone and ID basically means that you can’t book tours, hotels, Airbnb’s, or much else, unless you plan on walking up to each attraction the day of and hoping for the best. Anyway, that is why I say to stay organized. Make a list of the places and tours you want to do, plan out what days you are going to do certain things, and try to map it out so if you know one site is right next to another then you should visit those two things on the same day. Furthermore, strategize with your belongings. If you have multiple credit cards, always have one with you but also leave one in your luggage at your hotel. That way if you are to get pickpocketed or lose anything, you still have a backup card. Many countries will also have cash only rules, so make sure to keep cash on you but never carry a huge wad of cash. Just periodically withdraw some from an ATM. Another thing that I do is to keep my luggage organized. Don’t be messy as it leads to losing things. Try to put stuff back into your luggage once you are done using it and try to put it back in the same luggage pocket, so that if you ever need something it is in the same place as it was last time. This prevents having to rummage through bags and taking things out every time you search for an item, also in turn preventing you from losing things. Last but not least, if you can, try to purchase a mobile charger. You are going to be using your phone on vacations a lot. Whether it be for photos, videos, or maps, you will have it out a lot, meaning that the battery will drain faster than normal. The amount of times that my phone has died and I don’t know the directions to get home, is probably sad to admit. Don’t get stuck like that as I have.

Before You Go Out, Make Sure You Have A Way To Get Home

This is something you should do whenever you go out, regardless of if you are traveling or if you are just in your hometown. Always make sure you have a way to get home from wherever you are. I made the mistake of not confirming this one time when I was in Portland, Oregon. One of the days of my vacation I decided to Uber to the outskirts of the city to visit one of the filming locations of my favorite childhood films. I figured that if an Uber could take me out to that area, that they could obviously bring me back too. That was a big mistake! The absolute panic that crossed my face when I saw that there were no Ubers, no Lyfts, no running buses, and no metros in my area that could get me back to downtown, was a sight to see. I was so scared and I did not even have cash to potentially call a taxi. I managed to get lucky and these two ladies offered to drive me all the way home. However, I would have definitely felt a lot safer not having to be picked up by random people. Now, I have definitely learned my lesson. I now make sure to check when the last train or bus is running wherever I am, or check to see if I can walk home, or if I can catch an Uber/Lyft.

If you have a bad gut feeling, get out. Your mind can catch up with what you are feeling later. This has become something that I actually live by. It essentially means that if you feel like something is wrong, it’s because something is wrong. Your gut and instincts are scientifically proven to pick up on bad signs before your mind logically figures out the reasons behind your bad feeling. Therefore, if you have a bad feeling, do not hesitate. Get yourself out of the situation and let your brain catch up on the reasoning behind the gut feeling later. This gut feeling came into play while I was on a trip to Costa Rica. I was getting on a 4 hour long shuttle bus that was taking me to the airport. I had a bad feeling by the time the bus driver arrived, as he was an hour late. My thought process was basically that I had already paid and needed to get back to the main city to catch my flight, so I boarded the bus. The bus driver was the most erratic, confused, and horrible driver I had ever sat with. I spent the next 4 hours constantly texting my family back home to keep them aware of my whereabouts, keeping my Google Maps open to make sure he did not deviate from our planned drive, and sitting up straight with my eyes wide open to make sure we were still on the road. The driver had no idea where we were going and drove right past the city where he was taking us. I got so scared at that point that when we stopped at a red light I just started screaming my head off and banging on the bus door until he opened it and let me hop off. I ended up calling an Uber and was safe, however I have no idea where he was taking us and what could have happened if I stayed in that bus any longer than I did. Now, I know that if I ever have a bad feeling about something, I will never again just go with it and see what happens. Losing money and time is nothing compared to your possible life.

Only a Few Tips

These are just a few of my safety trips for solo female traveling, however I would encourage women to live life spontaneously and adventure whenever they can, while also maintaining a safe journey and an ability to learn from some of my mistakes.

Aliyya is a part time freelance writer and a full-time law student. While pursuing a career as an attorney, she writes about her personal travels as well as the current global political climate. She hopes to one day become a full-time author. Buy her book at: Greater Than a Tourist: Lake Forest California USA

The Maasai of Kenya