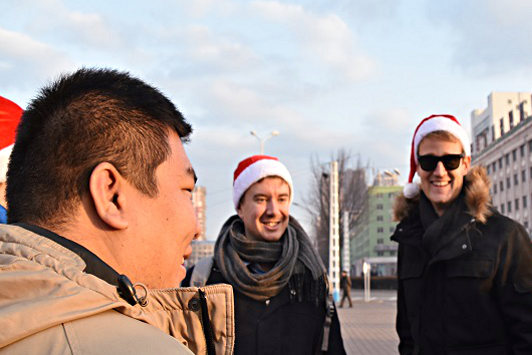 I had first visited the Democratic People's Republic of Korea (North Korea) in October 2016 as a day trip from Dandong in China. I've always liked to explore places where few others dare to go, so I was very excited about my first trip (not to mention a little scared). At the time relations between the West and the DPRK were at their worst for some time. The tragic story of Otto Warmbier was still fresh in everyone's minds and friends and family urged me to reconsider my trip.

The trouble is, the more that people tell me not to do something, the more I want to do it, and so it was that I spent an autumnal day touring the small city of Sinuiju. I was the only Westerner placed with a tour group of Chinese nationals, but I was kept back and given my own guide and basically had my own private tour. I visited a soap factory, museum, park and watched a kindergarten performance, before taking the bus the short hop across the Yalu River back into China.

My first visit left me with more questions than answers and so after the dust settled I decided to venture back to explore further. I booked onto a tour that included Pyongyang, Kaesung and the DMZ (Demilitarized Zone "“ the heavily fortified border with South Korea). This tour was to take place over the Christmas period in 2018. I've spent birthdays in China, Mongolia and Siberia to name a few, but Christmas in North Korea promised adventure on a whole new scale!

Fast forward to Christmas Eve 2018 and I arrived at the now familiar station in Dandong to meet my tour group and guide amid temperatures well below freezing. This time I would be with a large group of people from countries across Europe, South America and Canada. The tour guide was a six-foot tall Australian with a mop of blond hair and wicked sense of humour. He had been taking groups to North Korea for 10 years and made everyone feel very comfortable and relaxed about our journey into the hermit kingdom.

The train ride from Dandong was fun as everyone got to know each other and share a few beers. I had only had a very small glimpse at the country before and now I sat in amazement watching the North Korean landscape of snowy fields pass by under an azure winter sky. I could see small villages in the distance and people on bicycles going about their business and tried to imagine what life here must really be like.

We arrived in the capital, Pyongyang, in the evening and were taken straight out for dinner where we met the three North Korean guides that would accompany us everywhere. The meal was one of the best I can remember; fried pork and chicken, kimchi, salad and rice, all washed down with North Korea's very drinkable Taedong beer. After dinner we had a short walk and then made our way to the hotel. As luck would have it there were an uneven number of people in our group and I had a room all to myself (without paying the additional single-supplement fee).

The Ryangang hotel was a grand affair and similar to those found in China. The rooms were basic but comfortable, though it was a battle to get hot water in the mornings. With the outside temperature hovering around -20c, a cold shower was not the nicest way to start the day, but all part of the adventure nevertheless! There was a bar on the top floor of the hotel with impressive views over Pyongyang, and everyone met there after freshening up to get to know each other more over a few seasonal beers.

I awoke early on Christmas morning disappointed but not surprised that Santa Claus had not visited in the night. He must have had VISA trouble and got held up at the border, at least that's what I told myself! However, after drawing back the curtains, it was a clear that it would be a white Christmas as a layer of snow covered the world outside!

After a quick breakfast of fried eggs, cucumber and coffee everyone boarded the bus for our full day of sightseeing in Pyongyang. Rowan, the tour guide, handed out red and white "Santa" hats for us all to wear and the sight of a bunch of Westerners walking around snowy Pyongyang with Christmas hats on is one that I will never forget for as long as I live (it also threw out the window many preconceptions I had about what is and isn't acceptable in North Korea)!

Our first stop was Kim Il Sung Square which has been etched onto my memory from news reports about North Korea. It was fascinating to see the place with my own eyes and I was in awe of everything around me and each new experience. Traffic police directed taxis and other new cars as people went about their morning. There were children walking to school, women with shopping bags; it all looked and felt so normal. Many people have said to me that as a tourist I would only see stage-managed life, but I refuse to believe that the city and its three million inhabitants are all part of some carefully choreographed PR stunt by the DPRK.

The next stop was to pay our respects at the Mansudae statues of Kim Il Sung and Kim Jong Il, the founder of North Korea and his son and heir. At this point the mood did change and we were all instructed on how to behave. The North Korean tour guides were visibly tense as the leaders of North Korea are worshipped almost as gods and any perceived slight or show of disrespect is met with terrible consequences for all involved. Those with logos on clothing were asked to cover up and we were instructed to take photos with the statues in full frame. After the compulsory bow, we were soon back on the bus and the jolly atmosphere returned.

We went on to visit the University and saw students studying in the lecture halls and classrooms. From the roof we had great views of the city and could see across the Taedong River to the Juche Tower which we would later be climbing. I was most impressed that we were able to ride on the metro system as usually public transport is off-limits to foreigners. Again, it all seemed very normal with a cross-section of people going about their lives, some eyeing us with a subdued curiosity.

After another tasty meal of Korean hot pot we headed to the Juche Tower, the 160m tall stone-grey column with a golden flame atop. I was less than happy about the slow and shaky ride in the dated wooden elevator, but the birds-eye view of Pyongyang from the top was worth overcoming my fear of heights and confined spaces. I noticed that many of the apartment complexes below were painted in pastel colours which reminded me a little of Tirana in Albania (itself once a hermit state very similar to North Korea).

We spent the rest of the afternoon touring various sites such as the Monument to the Party Foundation; a large concrete piece of architecture portraying the hammer, sickle and calligraphy brush (which represent the workers, farmers and intellectuals of North Korea). After this we made our way to see the USS Pueblo, the only American ship still held in captivity by an enemy nation. The Pueblo is docked alongside the war museum and here we were met by a charming North Korean army Major who took us on a tour of the complex and didn't hold back on the propaganda!

I was extremely tired by the end of the day, but to say it had been fascinating would be an understatement. I was glad for the opportunity to learn more about North Korea and see what it was really like without having to rely on biased opinions or news reports. Pyongyang itself was a functioning city that didn't seem very different from places I have visited in China or Russia. I spent another two days in-country and visited the DMZ, but that is a story for another day. Did I learn more on the second trip as I had intended? Definitely, and I would urge the curious to do likewise! 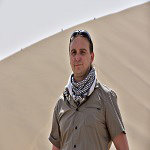 Stephen is an English teacher currently living and working in China. Originally from Colchester in England, he has travelled to over 50 countries and writes about his adventures for the blog www.thetripgoeson.com. His interests extend to music, reading, art and the great outdoors.

Getting Way Off the Beaten Path (video podcast)