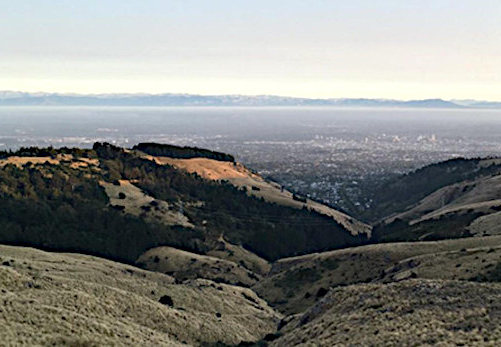 A view of Christchurch from the Cashmere Hills, above the city
©2020 Ed Newbould

“Everyone knows someone who died,” Julie says. “Nobody came out of it unscathed.”

In truth, it doesn’t sound like the sort of place that would appeal to even the most intrepid traveller. Christchurch is hardly the prettiest — half the city centre is a building site. It’s not the biggest, the hilliest, the busiest. And yet I’ve never been sorrier to leave a place behind.

Julie is my host here. It took some time before I dared ask about the 2011 earthquake, thinking it might be too painful, but she’s happy to share. I listen, and the question itches at me. Just what is it about Christchurch?

I sit under the trees by the Avon River, figuring. The water is almost still, ducks bobbing on the surface. Over the bank, a promenade, a row of cafes, tourists and locals enjoying morning coffee under a blue sky. The Bridge of Remembrance crosses the river to the right, its white arch resplendent in the sunshine. The alleyways and the terraces are tempting, the chance to spend a day watching the world go by. Instead, I walk, further into the centre until I reach the open square.

I can pick out the locals — they don’t look twice. But the tourists pull out their cameras and they marvel, just like I did when I first got here. The cathedral dominates our view, or what is left of it. You can tell from the scale of the wreckage, from the large stone bricks, the patterned arches, this was a magnificent building. It’s crumbled in two.

I’ve visited Quake City already, the museum dedicated to stories of hope and loss during the Canterbury earthquakes — stories like Julie’s. Gripping, terrifying accounts. I picture her at that perfect spot by the river on 22 February 2011, just as she told me.

12.45pm, lunch time. I’ve not been sleeping for months. That’s normal here — you can see the dark rings around other people’s eyes. You lie awake, staring at the ceiling, waiting for the vibration, waiting for the light shades to start swinging from the ceiling. That’s been happening since September when the first earthquake rocked us. But the buildings are regulated, they’re strong. Only one person died.

It doesn’t stop the fear. Thousands of aftershocks followed the quake, see. We’re always on edge.

12.51pm, and I take a bite from my sandwich, try to think about something else. I sense the bench move, and my heart leaps. I bounce upward, throwing my lunch skyward. Plates, glasses smash to the floor in the cafes over the river. People scream, and I scramble under the bench, hold on. I let out a moan, close my eyes and pray.

The roar eases after what feels like a lifetime, but the screaming doesn’t. I look up, greeted by dust, car alarms. Windows are smashed in. One side of a café is a mound of bricks, and more tumble down, shatter. I smell gas, I sniff again, and splutter as dust catches in my throat. There’s a car alarm going off behind. Its roof is buried under rocks.

The kids. I grab my phone in a shaking hand, try to find the school number. It takes me a lifetime of fumbling. No dial tone. Try again. Nothing. I look around for help. A man stumbles from the rubble, covered in white dust, blood pouring down his face. Others are running. I wipe the dirt from my eyes, stumble forwards. Sirens start up, as smoke blooms skyward across the city.

Nothing else matters except the kids. I set off, stumbling. The school isn’t far. God let them be ok.

Then the rumble starts again, and I’m thrown to the broken pavement once more.

A group of laughing school children walk past now, too young to remember. It was older buildings like the cathedral that fell, mainly, built before New Zealand’s strict building codes.

The aftershock that struck on 22 February was a 6.3 magnitude event. It created aftershocks of its own — one of which was at 1:04pm, another at 2:50pm — that would torture the trapped citizens of Christchurch. The shaking would go on for years to come.

Christchurch was devastated a once in a thousand-year event. Foundations were undermined, road, water and sewage systems obliterated. Floods. Power cuts, fires. 60% of the historic centre was destroyed. 70,000 people found themselves without a habitable home or basic services. Businesses, jobs, all lost. People left the city and didn’t come back.

This place is scarred, just as Julie told me. I walk on, not realising where my feet are taking me until I get there, a few streets away. 185 white chairs by the roadside, each painting a picture "“ a baby carrier, a barber’s stool, an armchair. One for each person that died. I move along the rows, following the worn path.

The white chairs of all shapes and sizes, representing each person that died in the disaster
©2020 Ed Newbould

You are never far away from a landmark of destruction in this city. Some are building sites, others remain untouched, flooded. They draw tourists and their cameras — these fascinating, frightening reminders.

I route back toward the cathedral, knowing how to lift my mood. For those who can tear their eyes from the crumbling ruins, there’s a large building to the side. Families, couples, elderly, and young pass through the revolving door. Above the entrance, Tranga. It looks new, with large windows and a golden façade. I step inside a welcoming entrance hall. A cafe. There are help desks. Staircases sweep upward to themed levels, and I climb to different zones. It’s huge.

There is laughter and games on some levels, teaching spaces and learning centres on others. Welcoming smiles greet me, not just from the staff, but from anyone I pass, like I’m a regular. I smile back. I suppose I am — I’ve been every day for the last week — but there’s no way they recognise me. There are so many people making the most of this hub of activity. Welcome to the Tranga library.

It is just the beginning.

I head back outside, don’t notice the cathedral this time, and make a beeline for the Margaret Mahy playground. I hear children playing before I reach the place. It was designed by Christchurch’s youngsters — they were asked what they want a playground to look like. The result? Zip wires, water games, climbing frames, a sprawling, wonderful adventure that has everything. Young and old, the park is full of joy.

I jump on one of the lime green electric scooters you can find on every street corner of the city. With its flat, wide footpaths laid out in a grid system, it’s easy to navigate the centre. I fly along with others "“ people late for meetings, or kids making their way into town. Along New Regent Street, with its saloon-style buildings, shops and cafes lining the way, the famous tramlines snaking down the middle.

I recognise a couple at a café. I met them the week before when walking about town with Julie "“ she seemed to know everyone we passed. In fact, we’d made a few friends in our short time here. Julie has taken us to all sorts — games night, tennis, a weekend in a holiday cottage. At the local parkrun the Saturday before, I was approached by multiple people asking me how I was, where I was from, how long was I staying. Parkruns are always welcoming, of course, but this was different.

I pull on the brakes. That was my answer. It was different.

Researchers report that although natural disasters impact mental health negatively — post-traumatic stress disorder, drug and alcohol use "“ they can result in pro-social behaviours, too. The community here have been through a living nightmare, but they’ve done it together. They’ve come out the other side with an understanding of what is important in life.
I leave the scooter, walk, looking at street art as I go. It tells the story of a city, and a people coming together. Community. Friendship. Family.

There was no handbook for what to do after the disaster struck here, but they are reshaping Christchurch, bit by bit. The river front, the library, the playground, New Regent Street, it’s just the beginning. It is taking time, but that’s ok. The people still smile. They have been through worse.

Out of the new library window, the cathedral sits, a reminder of the past. You can’t forget what happened here, and the people don’t need to.

They have grown out of it, and they’ve turned Christchurch into one of the most unique cities in the world.

From teaching English as a foreign language, to working as a HR Manager, Ed has dipped his toes in many oceans. In 2018, he decided to cross one (or two), taking a six-month campervan trip around New Zealand, followed by a three-month hop through SE Asia. He returned to Yorkshire where he works full-time as a Content Writer.