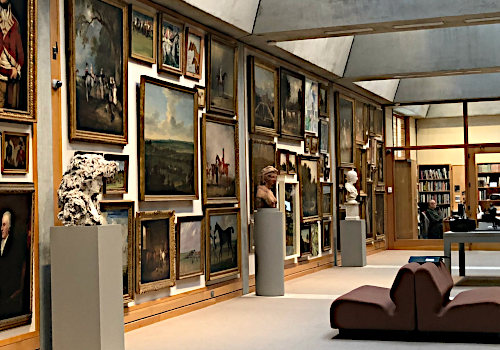 Inside the Long Gallery ©2020 Susmita Sengupta

About a little more than an hour drive or train ride from the metropolis of New York City lies New Haven in the state of Connecticut. A much smaller town, its fame stems from the fact that it is home to Yale University, the premier Ivy League educational institution. And so this place probably will not be on the radar of a tourist’s mind. But that would be a mistake.

New Haven, as I discovered on a weekend trip last year, was a wonderful place to visit for a short sojourn. A family engagement presented an opportunity and I took an Amtrak train from Penn Station in New York, alighting at Union Station, New Haven, a mere one and half hours later. Immediately I was impressed by the glossy stainless steel ceilings of the tunnels through which I walked into the main station area, where I was further fascinated by the ornate coffered ceilings, gleaming chandeliers and massive archways.

I was curious to know more about its architectural history. A bit of research enlightened me that Union Station was listed in the National Register of Historic Places and was built in 1920, designed by Cass Gilbert, the architect of the Woolworth Building in New York.

A View of the Yale University Campus, New Haven

Soon I was in my hotel room and from the window I got my first look at the buildings of Yale University, their yellow walls and towers reminding me of European castles rather than an institution of learning. The architecture is Gothic Revival, the reason for the castle-like look. But the campus is a mix of buildings designed by the who’s who of the architecture world.

From Eero Saarinen’s striking Ingalls Rink, to Louis I. Kahn’s signature works, to powerful buildings from the firm of Skidmore, Owings and Merrill, to works by Carre and Hastings and Paul Rudolph, I quickly realized it would be difficult for me to walk through the entire lot in the limited time that I had at my disposal. So I decided to zero in on a few that would satisfy my hunger for both art and architecture.

The Tower of Books at the Beinecke Library ©2020 Susmita Sengupta

It was early evening when I stepped out for a short visit into the university campus to see what I had read as ‘six story glass enclosed tower of book stacks, holding approximately 18000 volumes. The Beinecke Rare Book and Manuscript Library website had detailed information on its history and architecture, had free access and luckily enough stayed open late.

I strolled along the sunken courtyard designed by Isamu Noguchi, through the giant revolving doors of the library, entered and stood transfixed. There was the tower, the books glowing like jewels inside the lighted glass windows, the whole ensemble in a cavernous space with walls of translucent marble. To reach this mezzanine, there were twin staircases on either side, and I admired the truly striking view around me.

The Beinecke was designed by Gordon Bunshaft of the architecture firm of Skidmore, Owings and Merrill. The mezzanine had display boxes of other rare books beckoning to be looked at. John James Audubon’s “The Birds of America” showed pages of gorgeous hand drawn paintings by Audubon of the Carolina Parrot, done in the 19th century, extinct now but ‘plentiful’ during Audubon’s time as mentioned in the information plate. In the display box next to it was The Gutenberg Bible, from the 15th century, one of the earliest Western books printed from movable type and named so after its printer.

Next morning with plans to see two museums I walked briskly to the Yale University Art Gallery, the oldest college museum in the country, with splendid neo Gothic architecture plus with a modernist extension designed by Louis I. Kahn. Also free to visit, the museum is a repository of ancient and modern collections that represent the world and can rival many of the more famous art museums around the country.

A quick walk through its many galleries, showed me what a vast collection this was, as the university expanded on its beginnings in 1832 when John Trumbull donated more than 100 paintings. I particularly loved the gallery on African Art as I ambled through displays of intricate and gorgeous figurines, textiles, statuettes and masks, the likes of which I had never encountered in other celebrated museums.

Across the street and again with no entry fee is Yale Center for British Art, founded by Paul Mellon, an Yale College alumnus who donated his entire collection. It houses the largest assemblage of British art and sculpture, photographs, books and manuscripts outside of the UK.

All this is housed in magnificent surroundings, again designed by the legendary modernist architect, Louis I. Kahn. Though the Center’s exterior of steel and glass may not turn heads today, it epitomized modernist architecture at its finest when it was built in the 1970s. I looked around the entrance court, soaking in the beauty of the four floor high skylit central area with its oak paneled walls.

Arranged in a chronological fashion, the museum highlights the growth and impact of British culture and art from the mid 15th century to the modern times. I whizzed through galleries exhibiting the Whistler and the Gainsborough, the Turner and the Constable, the stalwart British painters who attract most of the visitors to this and other art museums because my interests lay elsewhere.

Art of the British Empire

I was most curious about the section titled ‘Rule Britannia’, a play of punctuation on the patriotic British poem, ‘Rule, Britannia! Britannia rule the waves Britons never, never, never shall be slaves.’ This was where the Center had a very rich collection, showcasing art from the era that led to the British Empire. I wanted to spend time and savor the paintings and artworks by artists from the era of the East India Company, known as the Company artists. The collection is considered to be second best to the collection of art from that time, outside of Britain.

The 18th century painting was gigantic. Dressed in crisp, white linen shirts, and brightly colored topcoats and breeches, the men sat ramrod straight in their chairs, their gazes confident. An enslaved black servant boy, also in finery but noticeably with a padlocked metal collar around his neck looked at them. I read the information plaque. ”
“Elihu Yale, William Cavendish, the Second Duke of Devonshire, Lord James Cavendish, Mr. Tunstal and an Enslaved Servant’ read the painting title. “Elihu Yale was governor of the East India Company’s settlement at Fort St. George, Madras, now Chennai”, the information continued. The founding benefactor of Yale University amassed his fortune after his arrival in Madras in 1672 where among his other duties he also oversaw the company’s activities in transatlantic slave trade.

I gazed at the painting of Shuja-ud-Daula, the Nawab of Oudh, in heavily embroidered robes and a fur hat with gold necklaces around his neck, grasping a bow in his right hand as he stared at the viewer with a powerful and unflinching gaze. It was painted in 1772 by Tilly Kettle, the first of the Company artists who, unable to cope with the competition as a portrait artist in Britain sailed for the greener pastures of India where he promptly made a name for himself painting portraits of East India Company officials and Indian rulers.

Exhibited nearby was ‘Dancing Girl’, also painted by Kettle in 1772 at the court of Shuja-ud-Daula. The nautch or dancing girl was a popular form of entertainment in regal courts and rose to prominence during Mughal and British times. The painting was realistic, a bejeweled woman dressed in a bright red sari and holding the stem of a hookah in her left hand. I marveled at the number of heavy gold chains and necklaces, her gorgeous piece of head jewelry and ornate silver anklets.

Myriad paintings of forts, palaces, mosques and temples, bridges and British colonists with their Indian servants depicted Indian scenes from the 18th-19th century, providing me with an expansive view of the world of Indian life under early British rule. They were painted by artists such as William Hodges, better known as the artist for James Cook’s expeditions and Thomas Daniell and his nephew William, both landscape painters who moved to India, after being unsuccessful as landscape painters in Britain.

There were unusual artworks that I had never seen anywhere before like the glorious Kanchenjunga peak of the Himalayas, painted in 1876 in Darjeeling by Edward Lear, most noted for his limericks.

Soon I was in the Long Gallery, a 140 foot long salon style space where paintings hung from floor to ceiling, covering the entire space in British Empire art, so much so that I did not know where to concentrate.

The architecture of the Long Gallery as envisioned by Kahn was spectacular and I admired the juxtaposition of this grand space with the items exhibited. There were paintings of rhinoceroses in Indian forests, British colonists on tiger hunts and Indian landscapes interspersed with a few paintings of Greece and Egypt.

My attention went to “The Two Sons of Tipu Sahib, Sultan of Mysore, being handed over as Hostages to General Cornwallis”, painted by Robert Smirke in 1792, based on the happenings of the Third Anglo-Mysore war. It took thirty years and four wars known as the Anglo-Mysore wars before the East India Company succeeded in defeating the ‘Tiger of Mysore’, paving way for the beginnings of British rule in India.

I stepped out of the Yale Center for British Art with a renewed understanding of the manner in which seminal architecture bestows a place of prominence and enhances and elevates the depth and respect for art that might have a painful historical context for some of its viewers. And I looked at the beautiful Gothic architecture of the Yale campus buildings and pondered over the riches gathered in India by Elihu Yale that enabled the establishment of a preeminent educational institution in America.

Thus, even if one has no connections to Yale University, the campus and its many attractions posed a lovely way to spend a day or even a night away.

Susmita Sengupta, an architect by background, from New York City, loves to travel with her family. Her articles have been published in Travel Thru History, Go Nomad, Go World Travel, Travel Signposts, Travelstoke App, In the Know Traveler and Intrepid Times.