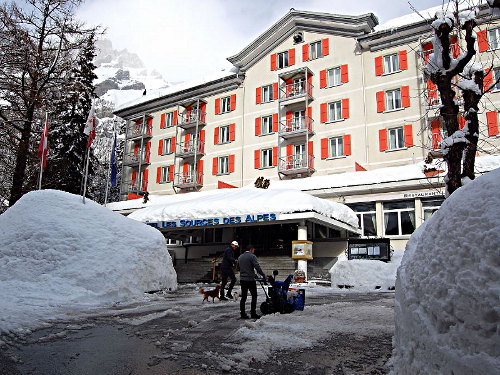 If you have the hots for hot springs, Leukerbad is the place to hot tail it to.

In January I boarded the Glacier Express from St. Moritz at southeastern Switzerland and rode cross country to Zermatt, where the Matterhorn is located in the Alpine nation's southwestern canton of Valais (or Wallis). En route, I detoured to visit Leukerbad, home of the Alps' biggest thermal spa. One million gallons of healing water with temperatures up to 124 degrees Fahrenheit flow from 65 thermal springs to Leukerbad. This thermal pool village is accessible via a breathtaking bus ride from the Visp train station up a narrow mountain pass with hairpin turns to the 4,600 foot high hamlet, with views of Europe's most recognizable peak, the Matterhorn, and of Aletsch Glacier, the Alps' longest ice flow.

Leukerbad has three public and four hotels with their own thermal pools, with a total of 32 hot springs. Whether it's winter or summer, the reputedly mineral rich water is so warm bathers can enjoy the indoor and outdoor pools year round, which is especially jaw-dropping when one is directly beneath the sky, surrounded by snow and ice with majestic mountain vistas. Skiers, hikers, bikers and those seeking surcease from daily moans, groans and woes can find rehabilitation in this sultry H2O that soothes the soul and flesh and gives new meaning to the old expression "you're in hot water now."

The indoor pool at Leukerbad-Therme, a comprehensive complex built around the thermal water ©2018 Ed Rampell

Leukerbad-Therme is a spacious facility with 10 interior and exterior thermal pools, sauna, wellness center, waterslides, restaurants, locker rooms, etc., for locals and tourists, grown-ups and families alike. The temperatures of the water in this public bathing establishment's pools range from 82 to 109 degrees Fahrenheit.

On the other hand, the Roman-Irish Bath, located within the extensive Walliser Alpentherme & Spa complex, is a "clothing optional," more private venue for adults only. Actually, this is a misnomer, because swimsuits are really not an option here. Derived from ancient Roman nude bathing rituals, the Roman-Irish Bath has 11 stations, including sauna, steam bath and a whirlpool in water up to 97 degrees Fahrenheit and a massage executed with a brush and special soap. The entire 11-stage procedure, intended to remove the anxiety and stress of everyday life, takes at least two hours. Walliser Alpentherme & Spa's treatments also include traditional Chinese medicine, hot stone and Ayurvedic massages, fango (mud from Italian thermal springs) exfoliating with pulverized volcanic rock and facials.

Of course, this being Switzerland, one can ride cable cars from Leukerbad up to high alpine recreation zones: 7,618 foot high Mount Gemmi and to 7,710 foot RinderhÃ¼tte. At the latter I lunched at Torrent restaurant on typical Swiss fare – rÃ¶sti (roasted potatoes) topped by cheese and sunny side up eggs, with hot chocolate.

Dating back to 1834, the stately Les Sources des Alpes Hotel & Spa, located at the foot of Mount Gemmi and near the Walliser Alpentherme & Spa, is one of Leukerbad's hotels featuring private thermal pools, which is the focal point of the property's 3,000 square foot wellness and beauty center. It includes 10 treatment rooms, a Hammam & Sauna chalet and uses the Swiss Niance brand of products. Treatments such as hot stone and Ayurvedic massages, anti-aging peels, volcanic mud application, facials, plus Alp salt, lavender or coffee scrubs are applied.

With only 30 units, this five-star hotel has a boutique, intimate ambiance that makes visitors feel right at home. Instead of numbers the rooms are known by names. Mine was "Lavande," which translates as "lavender" and is a flower. My well-appointed, very comfortable suite included a large bedroom, living room, balcony and a connecting corridor to the bathroom facilities.

Les Sources' restaurant, La Malvoisie, provides attentively served gourmet cuisine from a menu designed by Chef Kevin Kirchmaier. The three, five or seven course meals, paired with recommended wines, favors regional products, with Swiss meats such as lamb and seafood, including salmon trout, sea bass and lobster bisque, from Switzerland and France. The lobby bar features a pianist, which enhances the intimate atmosphere of a hotel that may be five-star, but is no impersonal mega-resort.

Overnight guests at Les Sources and other village hotels are entitled to the Leukerbad Card Plus (LBC+), which provides free access to all Sportarena facilities, travel on local Ring-Jet buses, and discounted use of the cableways and thermal baths. With its rejuvenating thermal waters, deluxe accommodations and delicious degustation, I felt good at Leukerbad. 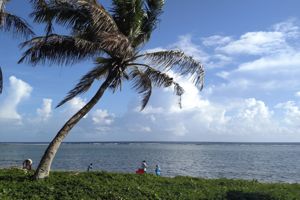 Cruise Aboard the M.S. Andrea