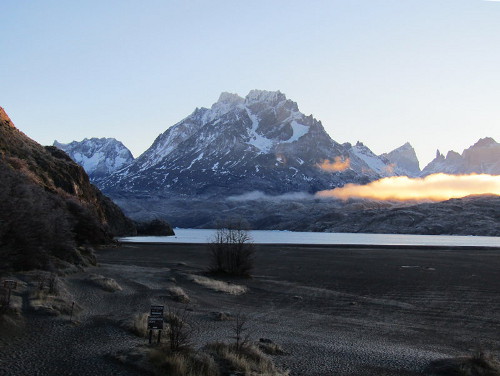 I never thought silence can be so loud. That was the thought that soared to my mind as my wife and I stepped into the Martian landscape of Lago Grey in the Torres del Paine National Park. This was our honeymoon and the black, misty shores of the glacial lake wasn’t the typical sun-kissed beach most people associate with a “honeymoon destination”.

Lago Grey is in the heart of one of Chile’s largest national parks. The park measures approximately 180,000 hectares. And it is, to put it succinctly, cut-off.

My wife and I were based in Santiago Chile and our journey to our hotel-by-the-lake was an odyssey worth writing a novel about. After an excellent, indigenous-influenced meal at Peumayen, I rushed back to the hotel, packed and got a taxi to the airport to make our midnight flight.

The over three-hour flight to Punta Arenas saw me catching up on some sleep. Punta Arenas is the southernmost city in the world. It lies in Chile’s Magallanes and Antarctica Chilena region. This was as far away from our Mediterranean home as my wife and had ever been.

Driving into Punta Arenas from the airport was a haunting moment. It was still dawn. I drove past ice-covered tundra and the gentle Pacific coastline. When I entered Punta Arenas it felt surprisingly familiar.

The architecture of this small Antarctic city was surprisingly European. It reminded me of a rain-battered Welsh coastal town. It was, in retrospect, a shame I only spent one day in that city. It looked uniquely beautiful.

I did, during that day, have the privilege of saying I watched England’s long-overdue World Cup semi-final appearance in a pub at the end of the world. England was playing against Croatia. This was a World Cup summer. I watched it in a wonderfully deserted pub whilst drinking Austral beer.

I were surprised to learn that there was a sizable Croatian community living in Punta Arenas. And although I was supporting England, I enjoyed this great irony of celebrating with Croatians in Punta Arenas. This is what travel is supposed to be.

Early the next morning, at seven a.m., I boarded our bus for Puerto Natales. It was to be a three hour bus ride. I planned on catching up on some sleep on the bus but I was kept awake by the incredible sky over my head. As the reluctant night refused to give way to day, the sky was a beehive of stars. The southern skies were stuff of legends. It was the most beautiful bus ride of my life. I stayed awake looking up and writing poems and stories.

It was daytime by the time I made it into Puerto Natales but I didn’t stay there long. The taxi driver, a Santiago local that defected to this frozen paradise, was waiting for us. This was the last leg of my journey — a four-hour drive to my hotel in Lago Grey. Yes, you see now what I meant by odyssey.

The four-hour drive flew by thanks to the driver’s company. He was informative, passionate about the landscape, and even stopped at a few choice stops, like a cave where they discovered remains of Ice Age fauna.

And of course, the landscape was just as mesmerizing. As soon as I entered the park the ranger at the pass gave me a helpful and disconcerting leaflet which included puma warnings — basically, if you see a puma approach you, start shouting and make yourself look big!

Torres del Paine is an icy tundra cut across by the Cordillera del Paine. It was a surreal, mesmerizing sight. Especially the deep-blue lakes interspersed around the parks, and ginger guanacos on cliff-sides, as if floating through the mist. 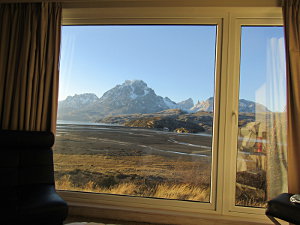 View From Our Room in Hotel Lago Grey
©2019 Justin Fenech

My hotel, the Hotel Lago Grey, was right at the heart of the park. From the outside it looked like a cluster of log cabins but its interior was brilliantly modern. My room had a wall-to-wall window that overlooked the breathtaking view of the lake and the Torres del Paine themselves.

It was interesting getting to know the staff of the hotel. I had to ask them the inevitable question: do you drive the four hour drive here every day? Of course, they didn’t. They worked on shifts. They would spend four days working, living in the hotel, then another three days off. Most of them lived in Puerto Natales and some even in distant Punta Arenas. What passion, I thought!

Paine means blue in the indigenous language of the region. And I could see why.

The next four days were spent in wonder. I was there in July, which is winter for the region. Every morning the sun rose at around ten and set at seven. The days were short but the shadow of adventure was long.

I felt like a child in the morning, walking through the ice, crunching it and enjoying the sounds it made.

The walk to the lake itself only took around twenty minutes. Along the way you had to enter a small woodland, full of ice-covered trees and winding dead branches. Crossing over a rickety, slushy bridge, past a flowing river, you soon started your descent into the lake.

The first few days I made the walk, the weather was overcast and the entire lake was covered in mist. So much so that I could no longer see the mountains beyond. The black shore of the lake and the resplendent blue of the glacial water felt paranormally beautiful.

“Listen”, my wife told me one day as we sat writing and sketching the lake.

She was right. If you stopped moving you could hear absolutely nothing. Not rustling water, not people’s distant voices, not wind, no birds — a deep, deep nothing. It was the most spine-tingling sound I had ever heard. There really is nothing like it. I could have stayed there and listened to the silent symphony for days and months.

The highlight of my stay came when I went on a boat ride, organized by the hotel itself, for a total of approximately 100euro. The boat ride, which took nearly three hours. It sailed out onto the lake and weaved through the glaciers of the lake.

These large, imposing structures, so frail yet imperious, put on a good show that day. I went on the boat ride on the last day of my stay in Lago Grey. The heavens were on my side. Finally, the mist cleared and it was blue skies all the way.

The mountains surrounded me like towering giants. It felt like the opening scene of Jurassic Park, my face in childish awe at first viewing dinosaurs. The glacial wall was so unique, its colouration so distinct up close and above them the mountains competed for your attention with their own imposing beauty.

What could make this better?

This was one of those rare moments when the travel gods align and concoct a few hours of perfection.

There is a line, in Oscar Wilde’s The Importance of Being Earnest, where Algernon speaks these lines to Cecily:

“I hope, Cecily, I shall not offend you if I state quite frankly and openly that you seem to me to be in every way the visible personification of absolute perfection.”

In every way the visible personification of absolute perfection. There is no better way to describe my experience in Patagonia.

Justin is a 30-year-old author from Malta. He works as an educator and a writer. He is the author of several novels and he has had several short stories published in online reviews such as Brasilia Review, Eastlit Magazine, Cecile's Writers, Across the Margin and many others. His writing both fiction and non-fiction is inspired by travel and wanderlust. He is currently working on a novel entitled Beauty and Freedom set in Budapest, Hungary.
Follow him at justinfenech.wordpress.com

The “Dama de Elche” and other Iberian “Ladies”