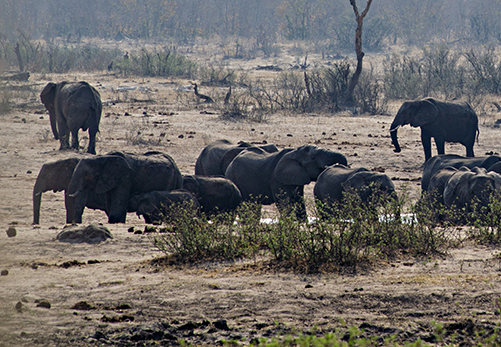 I visited Hwange as part of an organized safari tour. When they told me that I was heading to this park, I was unsure about what was to come. I had never heard about Hwange National Park before and most of what I had seen in Zimbabwe previously, had been a disappointment. To be honest, coming from Chobe National park in Botswana a couple of days earlier and seeing maybe a hundred elephants in one morning, my expectations for the rest of the trip were low. Full disclosure: I could not have been more wrong.

I was traveling through South of Africa with a company tour and while the first few days were fast-paced and an unforgettable experience, halfway through the trip it all slowed down significantly. That night, I set the tent in the outskirts of Hwange. Because this park, as most of Africa's, do not have any borders, during the night I heard multiple times several baboons scrolling through the campsite looking for food.

After waking up, seeing the mess created by the baboons and killing a few hours on camp, the day soon warmed up to just over 100ÂºF. Soon after noon, I was picked up with the rest of the group by some of the local rangers. A number of parks in Botswana, Zimbabwe and South Africa allow game drives with private vehicles. While this ensures more visits, it also carries the burden of people driving faster, often damaging the park and scaring the wildlife away from the actual roads. Which at the end results in more complicated sightings for everybody else. Because of these reasons, in Hwange you can only visit the park with a guide.

While the ranger was driving, she told the people in the car about the effort that Zimbabwe was doing to protect the spotted wild dogs. This breed of wild dogs is in danger of extinction, mostly because they are nocturnal and full litters are killed at night by cars driving too fast. To help them reproduce and try to recover the species, within the borders of the National Park of Hwange, there is a Wild Dog Conservation center.

In order to reach the actual entrance to the park, the guide took the open vehicle for almost an hour through dusty and sandy roads. Even though the campsite the previous night was at outskirts of the park, the maximum speed is also limited in a massive area around it. Hwange, while not being especially well known in the Northern hemisphere, is the second largest National Park in Southern Africa. With only Krugger National Park in South Africa covering a larger extension of terrain.

We crossed the barrier, and soon after that, I just knew it was going to be an amazing game drive. Barely five minutes into the park, meters away from the entrance, I saw a small pond. There, maybe forty or fifty elephants were drinking, while some crocs watched them covered in mud. Now and then, there was the occasional head of the hippo popping in the middle of the pond. And behind them, there were two lionesses sleeping under the shadow of a tree.

Sitting on that car for less than fifteen minutes, I witnessed several hundred elephants. And on the horizon it was possible to see even more coming while the ones by the pond were leaving. On a perfectly essayed choreography.

For the following couple of hours, I sat on that car and witnessed shocked the beauty of Zimbabwe. I was amazed about how a country that is known for its political instability and economic issues could be the home of such an amazing park. And how no one else knew about this.

Serval minutes before sunset, getting ready for a night of hunting ©2019 Jenn Perez

Sunsets in Africa are fast. And soon, the sun was starting to hide behind the savanna. It was the 10th day in the safari, and I had seen four out of the big five. And then I heard over the guide's radio my favorite word of the day: leopard. The only animal I was missing on my list.
The guide speeded up to get to the cat before the sun was completely down. I breathed in more sand than I am willing to accept… and then we made it. There it was, behind a small dune. Hidden behind some yellow grass, there was a cat. Smaller than a leopard, but also spotted in a very similar way, there was a serval.

By the end of the trip I indeed saw the big five. And even though that day I was sure we were "hunting" a leopard, finding instead a serval made the day more special. Even our own guide was excited about the cat, being only the second one she had seen in over a decade. And you know that when your guide is taking a picture is because it is something out of the ordinary.

Even though I had low expectations for Zimbabwe, Hwange, and later on, Matobos, they amazed me. I had the privilege of visiting this country and sleeping in one of the most amazing places on the face of the earth. Even if Zimbabwe is not as touristy as Botswana or South Africa, believe me when I tell you that it is well worth it. Go for it. You will not regret it.

Jenn, from the Solivagant Soul writes about traveling the world, most of the time solo, and a few other times with more people. From the perspective of a young solo traveler, you can discover with her, the best hacks for traveling and camping, where to find the best food in each destination as well as some very useful photography tips. Follow her at: www.thesolivagantsoul.com

Catching the Bus in Antigua