Murdered on the Glacier Express to Zermatt

In January I planned to take an eight hour ride via first class coach with panoramic windows from Switzerland's most luxurious center in its southeast to its poshest outpost in the southwest. But my train trip from St. Moritz to Zermatt was – with apologies to detective Hercule Poirot – murdered on the Glacier Express. Due to unusually heavy snowy conditions my journey towards the Matterhorn in the Swiss canton of Valais was derailed. After only about two hours I was forced to disembark from the Glacier Express at Chur and catch a train to Zurich, more or less traveling north when I needed to head southwest.

At Zurich I transferred from the main station for a train to Brig, where I caught another train and then a cable car up to Riederalp (population: 250) on high in the Aletsch Arena, staying at Hotel Royal. The following day I went via snowshoe on a three hour trek up the ski runs. Although my guide Jasmine kept insisting the Alps' largest glacier was right before us, due to all the snow and clouds I couldn't see the Great Aletsch Glacier, Jungfrau or, for that matter, the Matterhorn.

On January 19 I traveled by train and bus up a spectacular mountain pass to Leukerbad, known for thermal pools. But despite ascending the 7,710 foot Rindehutte by cable car the Matterhorn was still hidden from view. After staying at the five star Hotel Les Sources des Alpes I made my way by train (although not Glacier Express) to Zermatt.

I was met at Zermatt train station by an oom-pah band belting out tunes with oomph. It wasn't a triumphant welcome for the conquering heroes braving avalanches by pressing on via rail to this jetsetter village near the still-missing-in-action Matterhorn. My youthful guide explained the musicians were part of a regional carnival being celebrated that day in Zermatt. Ana-Lena said, "growing up in Zermatt was like living in paradise. We're far away from the world's problems, and there's no traffic" at this Alpine outpost allowing only electric vehicles.

Ana-Lena led me to the Horu Trophy Zermatt, where 12 curling teams competed for the cup in this traditional game requiring precision, skill and strength played on ice. She advised me the strolling minstrels of the Matterhorn were performing in front of the Catholic church. Snowflakes stinging my cheeks, we walked to the church plaza beside Bahnhofstrasse, the main drag full of tony, touristy shops.

The ensuing scene was straight out of a Brueghel painting depicting medieval merriment. An appreciative, joyful throng ringed the church front, buoyantly drinking, dancing and singing along with mirthful "Mitches" outrageously clad in colorful costumes, adorned with painted faces, exuberantly playing brass instruments and mobile drum sets. Regional bands performed songs such as Abba's "Mama Mia", "Quando Quando Quando" and other crowd pleasers. The young instrumentalists' on the steps cast a spell of sheer gaiety so contagious I half-expected the wooden Christ to leap off his cross affixed near the church entrance and start break dancing. In a pouring snowfall I listened, enthralled by gaily garbed, gamboling players and merrymakers without a care in the world. Insouciant, I mentally went back in time to a Middle Ages festival, losing track of time, standing entranced in the cold for almost two hours.

Afterwards, Ana-Lena guided me to my four-star, passing the climbers' cemetery in the church's graveyard, where doomed mountaineers who'd challenged the mighty Matterhorn were laid to rest. Many were buried alive by avalanches, but now, in death, their graves were submerged by eight foot high ivory banks – buried in death by snow.

I crossed the bridge and soon checked into Romantik Hotel Julen, which features Matterhorn views. But once again, Europe's most famous mountain wasn't visible – it was as if the Matterhorn was no longer composed of matter and had, due to some Alpine alchemy, transubstantiated. Ensconced in my cozy, pine-lined room with balcony, the phone rang: my would-be guide Christoph advised me the 10,134 foot high Gornergrat was inaccessible and going there via the Old World's highest open-air cog railway was impossible on Sunday.

Nevertheless, in the morning, fortified by a buffet breakfast including delicious bircher muesli, I made the most of it, riding whatever cable cars, funiculars and gondolas remained open. I walked about 10 minutes along the Vispa River in the snow to the cable car for 7,253 foot Riffelalp and later, on the opposite side of Zermatt, ascended via an enclosed, subway-like funicular to 7,506 foot Sunegga – but we were still in the soup. The Matterhorn's 14,691 foot high peak still wasn't playing peek-a-boo. Scheduled to leave Zermatt Monday, I began doubting I'd see that magic mountain British alpinist Edward Whymper had made history climbing in 1865.

But my January 22 departure was not to be – the relentlessly blowing snow had another thing in mind, making the train trip impassable. Like thousands of others I was stranded at Zermatt. Extending my stay at Hotel Julen, co-owner Paul-Marc Julen – son of a hotelier dynasty dating back to 1910 – advised me I'd be trapped until at least Tuesday. Although I wasn't leaking state secrets to the media, I was literally Edward "snowed-in."

So I promenaded down slushy Bahnhofstrasse I heard thunderous cracks – tourists pointed at the Alps, where two avalanches dumped snowfalls. Where just days earlier melodic merry pranksters had whimsically played carnival music, now hundreds of people stood on line at the train station, waiting to enter the tourism office and for those all-too-motionless trains. Although it looked like a refugee crisis, I didn't sense panic – well-heeled skiers and other tourists were faced with the prospect of extending their stays at upscale Zermatt, not frantically fleeing bombed out homes in war torn countries. As for me, I "resigned" myself to more five-course gourmet meals at delightful Hotel Julen.

At a "breadline," as a brass band pounded out oom-pah tunes, its co-owner Paul-Marc greeted me, waving as he served free al fresco bratwurst and coffee to hordes of temporarily displaced asylum seekers. (I later saw mein host interviewed, serving the "starving masses" on national Swiss TV.)

I trekked off Bahnhofstrasse's beaten path on winding, little-trod streets, heading uphill. En route I passed Zermatt's English Church, where one of the Brits who died during Whymper's ascent 150-plus years ago is interred beneath the altar. As shovelers and snow blowers blazed paths, I enjoyed impressive views of the en-snowed valley. Overhead, above hardy ravens, helicopters detonated explosions to break up snow jams.

Descending back to street level I crossed a bridge only to find the road beyond the now-closed cable car station to Riffelalp blockaded with multi-lingual signs warning of avalanches. Explosions were heard in the distance, but not even dynamite could blow the snowy curtain to smithereens. I hiked back to the snowbound village, visiting the superb Zermatlantis Museum, full of mountaineering relics, etc., including an exhibit about the disastrous Whymper expedition told, Rashomom-like, from various viewpoints, examining who was responsible for the expedition's four deaths. I began feeling my dream of seeing the Matterhorn was likewise doomed – and I'd have to settle for driving down to Disneyland to see it (or a reasonable facsimile) when I returned to L.A..

A Clear Day for a Matterhorn View ©2018 Ed Rampell

Back at Hotel Julen attentive front desk staffers informed me it was unlikely trains would run Tuesday, too. This, despite the fact that upon waking, for the first time since entering the Valais, the sun was shining. At the river I looked left and there it was: crowned by melted marshmallow clouds, the Matterhorn was back, larger than life! I did the only logical thing and headed back to the cable car station, which had not only reopened but today offered service from Furi to Trockener Steg, which at 9,642 feet offered a better and closer view than Riffelap.

After the cable car alighted at Trockener's mountain station, I stood on a restaurant deck enchanted by the Matterhorn, perpetually betrothed to wispy clouds snagged by its summit. Nikon poised, I patiently waited 20 minutes until cotton candy clouds drifted off and at long last I had a completely unobstructed view of what in English means the "valley peak." Leisurely returning to Furi I hopped aboard a gondola toward Riffelalp where I happily snapped away, as I then did back atop Sunegga, as jubilant skiers and snowboarders zoomed past me. 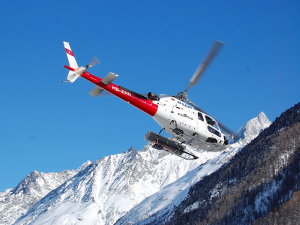 Despite the sunshine it was the same story Wednesday: not even a Matterhorn Mussolini could make those Zermatt trains run on time – or at all, for that matter. As my L.A. flight was scheduled Thursday, I took drastic action to escape from Zermatt.

I rode Hotel Julen's electric vehicle to the train station where a bus transported escapees to the helipad at the town's edge. There I lined up with hundreds of fugitives from Zermatt to ride a cavernous elevator to the rooftop to wait another 45-ish minutes to be air evacuated. Several red and white helicopters kept landing and depositing incoming, intrepid visitors while rescuing the prisoners of Zermatt. The slow moving queue finally snaked its way from the sunny outdoors into Air Zermatt's hangars where two women checked tickets and collected 70 francs (about $70 U.S. dollars – a "special deal" for runaways) for the flight. I was about halfway on the hangar line when I heard rescuers up front shout "eine?" Most fleers were in pairs or didn't understand Swiss German, but as I was just one, I jumped the line.

The last of five passengers to board, I had a window seat. Luggage placed inside a metal rack attached to the chopper, we blasted off, as other whirlybirds landed around us, continuing their Matterhorn mission of mercy. Other copters soared towards the mountains executing their explosive Alpine operation to blowup snowy barricades, reminding me of James Bond's helicopter fleet that staged the aerial raid on Blofeld's lair in On Her Majesty's Secret Service, set and shot in Switzerland in 1969.

Instead of a Beretta I fired my Nikon, shooting the Alps. Flying easterly opposite from the Matterhorn, we had no view of that magic mountain. But no matter – the five-ish minute airlift landed a few kilometers outside Zermatt at Tasch, where we were bused to a train station. My coach may not have been the much-vaunted Glacier Express with its picture windows, but it transported me to Zurich. My escape from Zermatt by electric vehicle, buses, train and copter took as long as trans-Atlantic flights.

While we weren't in imminent danger, getting marooned at the Matterhorn made me muse about real refugees – and how mean-spirited those eschewing helping people fleeing from devastating manmade or natural disasters are. I made my flight on time Thursday – and not a moment too soon, because "Avalanche Donald" landed in Air Force One at Zurich Airport for the World Economic Forum in Davos. Without a whimper it was time for this bedraggled Edward to go home. 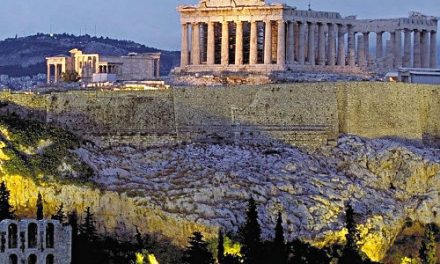 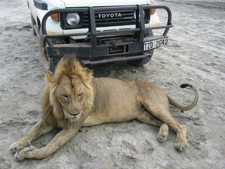