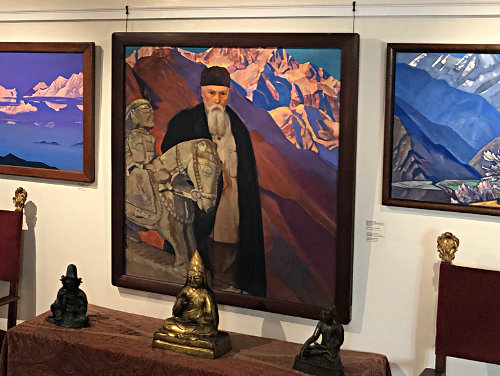 As a longtime resident of the pulsating New York City, I am always on the lookout for spots that are rarely on the radar of tourists. And as one can easily guess there is no dearth of such places which are sometimes hidden in plain view waiting to be discovered and savored.

On a quiet street in the far Upper West Side of New York City is a gem of a museum shrouded from eyesight. This is the Nicholas Roerich Museum, devoted to the works of the Russian born artist Nicholas Roerich whose art focused on the sights and sceneries of the Himalayan regions of India, Nepal and Tibet and the broader regions of Central Asia.

Born in St. Petersburg, Russia in 1874, Nicholas Roerich was an artist, painter, art historian, and archeologist, set and costume designer for ballets and operas, writer, philosopher and mystic. He was a prolific painter whose art explored the world of natural beauty and its spiritual and mythic origins.

He wrote books, poetry and essays highlighting his daily life and years spent in Russia, Europe, America and India. In the later years of his life, Nicholas Roerich settled in the Himalayan Kullu Valley of India where he died in 1947.

Nicholas Roerich Museum with its banner of peace. ©2019 Susmita Sengupta

On a bright, sunny day, I entered a typical New York brownstone on 107th Street off Riverside Drive and stepped into a tiny reception area where a smiling docent greeted and welcomed me into the museum. It turned out that I was the only visitor that day and I spent a leisurely one-hour walking through room after room of artwork, furniture and objects through three floors of the building. The museum houses all 210 paintings by Roerich. His early work is strongly influenced by his Russian heritage and I saw paintings based on Russian landscapes, history, orthodox churches and saints.

However, it was only after settling in India that Roerich’s true abilities as a painter burst forth. Climbing up the beautifully carved wooden staircase of this building dating back to 1898, I encountered a large portrait of the artist surrounded by some of his paintings. What was immediately striking about them were the gorgeous azure hues giving a life like turn to the Himalayan mountain ranges. I felt as if I had entered that different spiritual and mesmerizing world. Roerich was hugely influenced by the Eastern religions and mysticism and this influenced his work greatly. I loved the light that radiated from the snowy mountains in the “The Himalayan series” and the “Kulu series”. The painting titled “Leh Ladakh” from 1925 brought to life the moonscape kind of land that is the hallmark of Ladakh in the Kashmir region of India.

In the next room were his paintings of the Hindu god Krishna, various Tibetan influenced artworks of the Buddha and paintings of monasteries on high mountaintops. Equally fun to see were the costume design paintings like the one titled, “Costume Design for Rimsky-Korsakov Opera”, “The Tale of Tsar Saltan” which he painted in 1919 for the Royal Opera House in London.

Nicholas Roerich was not just an artist and philosopher but also believed that art and culture should play a significant role in the betterment of the world. Outside the building hangs a white banner emblazoned with a red circle that encloses three red circles within it. Inside I learnt that this sign is known as the Banner of Peace, a symbol for Roerich Pact, established by the painter in the early 1930s. Roerich believed that cultural artifacts of the world needed to be protected in both times of peace and war and on April 15, 1935 the Roerich Pact treaty was signed in the White House by member countries of the Americas. Because of his work towards preservation of cultural heritage in the world, Nicholas Roerich was also nominated for the Nobel Peace Prize.

The museum which has free admission is open on Tuesday – Friday from noon to 4pm and on Saturday and Sunday from 2 to 5pm. If you are lucky enough to be there at 5 pm on Sundays, you can even enjoy a free classical music concert that is held on almost all Sundays.

The Sights of Morningside Heights

Having some extra time on my hands, I decided to explore this area of Manhattan, also known as Morningside Heights. There are a few places in this neighborhood that are worthy of a visit. First up on this list is Columbia University in the City of New York, the only Ivy League institution in a major city. The university gives this neighborhood a college town feel. I started at the black, wrought iron campus gates located at 116th and Broadway with an opposite entry on 116th and Amsterdam Avenue. The road that connects these two gates is called Campus Walk and the buildings of the university are positioned on either side of them. Spend a few moments like I did sitting on the wide set of steps that lead up to the Low Library. I then walked into the gorgeous rotunda of the library designed to remind one of the Pantheon in Rome. This is where the Pulitzer Prizes, the premium national honors for achievements in journalism, literature and musical composition are awarded each year since their inception at Columbia by Joseph Pulitzer in 1917.

Once back outside, I saw tourists and students clicking selfies with Alma Mater, the bronze sculpture in the image of Goddess Minerva, that graces the steps and looks out on to the campus. It was designed by Daniel Chester French, famous for sculpting the statue of Abraham Lincoln at Lincoln Memorial in Washington D.C. Across the campus greens and facing Low Library I gazed out at Butler Library, the principal university library. Deciding to take a short walk to check out the campus I spied the statue of Alexander Hamilton, one of the university's many distinguished alumni and one of various statues and sculptures that dot the university campus, like the Rodin’s “The Thinker” or Henry Moore’s “Reclining Figure”.

The Church and the Cathedral

Near Columbia, a few blocks to the south, at 112th Street and Amsterdam Avenue is the imposing edifice of the Cathedral of St. John the Divine, my next stop on this neighborhood walk through. Still unfinished at about 130 years of age, the cathedral is built in Gothic Revival style and the entrance is truly impressive. There are seven chapels inside and the Gothic nave is the longest in the United States. If there’s time take a tour – tickets are $14 per person with discounts for students and seniors. I instead decided to stroll through the vast grounds of the cathedral, which includes a Biblical Garden, and is free to visit. I stopped by the Peace Fountain, a puzzling piece of public art in bronze that embodies the eternal victory of good over evil.

The neighborhood is also home to Riverside Church, situated at 120th Street and Riverside Drive, built in 1930 and modeled after the 13th century Chartres Cathedral in France. The nave can accommodate about 2000 worshipers and the church is recognized for the largest tuned carillon bell in the world. Reverend Dr. Martin Luther King Jr. spoke here in 1967 and so did Nelson Mandela who spoke once in 1990 and then again in 2005.

Walking past the Riverside Church, I crossed the street on Riverside Drive and then visited Grant’s Tomb located across from it. This is the largest mausoleum in North America, the final resting place of President Ulysses S. Grant, Commander of the Union Army during the Civil War and the 18th president of the United States and his wife, Julia. Designed in the Roman Revival style and completed in 1897, it is an unadorned and somber granite and marble tomb at the end of a serene tree lined plaza.

The Parks in Morningside Heights

While Central Park is the biggest draw for tourists to New York, the city is home to several other beautiful parks with their own identity and this neighborhood is home to two of them. I walked into Riverside Park, next to Grant’s Tomb, extending from 72nd Street to 158th Street, a prolonged stretch of greenery full of trees, flower gardens, playgrounds and walking and cycling paths that at places can take one right next to the Hudson River.

Morningside Park located on the steep incline of original Manhattan schist rock, that separates the neighborhood of Morningside Heights on the west from Harlem on the east, stretches from 110th Street to 123rd Street. It was designed by the landscape architects Frederick Law Olmsted and Calvert Vaux, the brains behind Central Park. The park has some of the most striking sceneries in the city, and the large pond with a “cascading waterfall” are certainly the highlights according to its website which I read while resting my tired legs, sitting on a bench in Riverside Park. A little bit tired by now I trekked to get a glimpse of Morningside Park and was elated to see ducks in the pond.

Being there on a Thursday, I was lucky enough to come across Columbia University Greenmarket, open also on Sundays from 9am to 4pm, along Broadway in front of the gates into Columbia University campus at 116th Street and extending up to 114th Street. The market runs year round except on July 4th and Thanksgiving Day and offers a cornucopia of local farm fresh produce, flowers, fruits, honey, preserved fruits and baked goods, dairy items and even meat and fish.

I can say that visiting this area of New York City will convey a very different picture of this city that never rests. 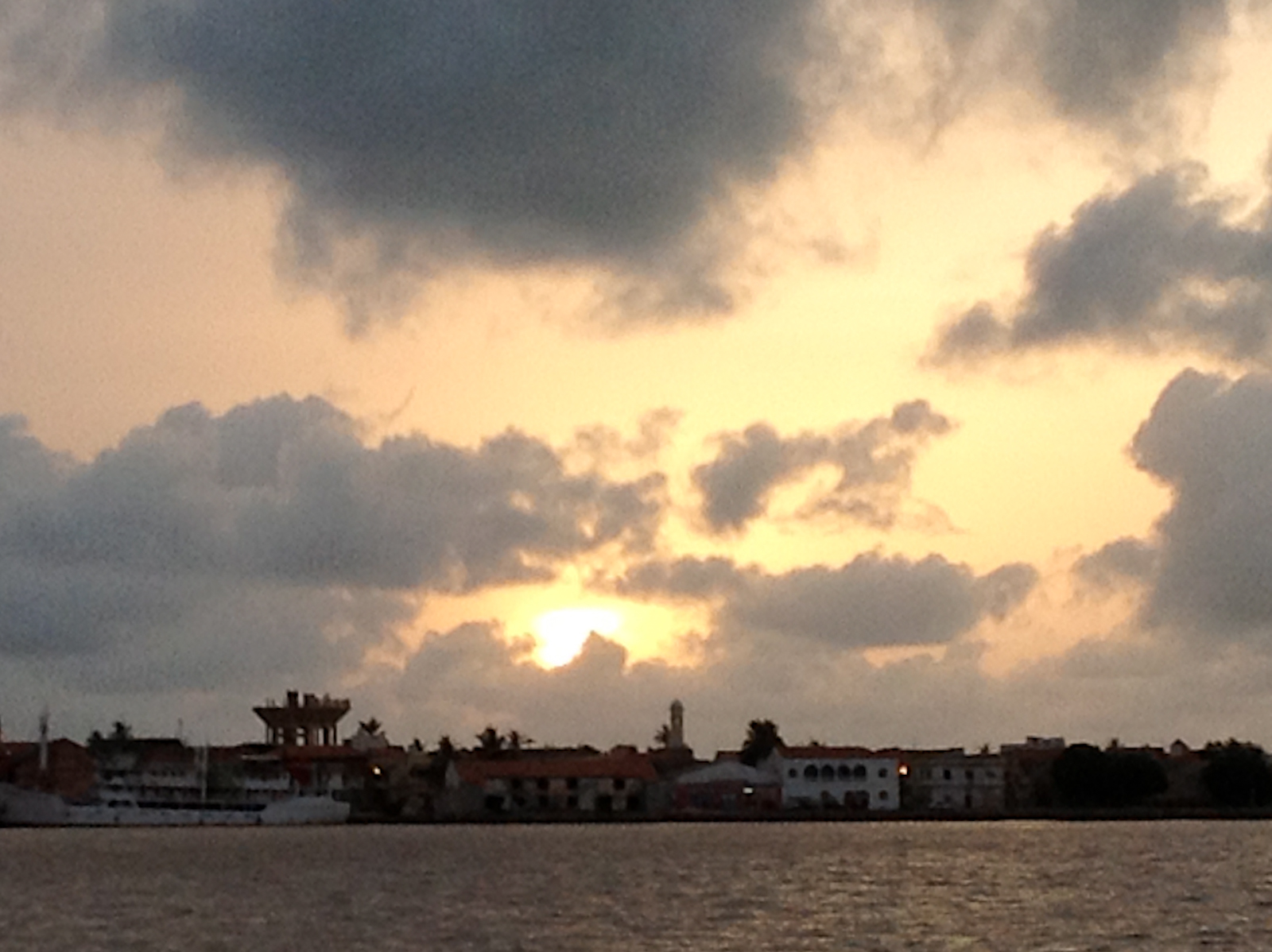 Meet Me in St. Louis, Senegal

Do You Need Travel Insurance?