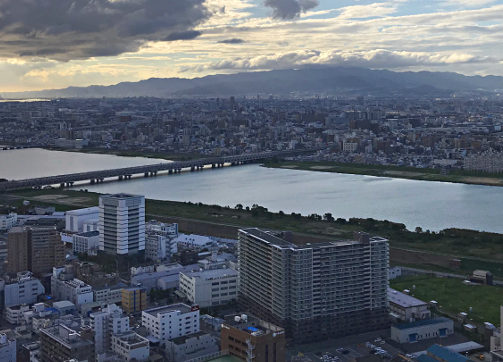 On an hour-long train ride from Nara to Osaka, the once peaceful landscape turns into a genuine bliss of neon lights. Osaka is clearly a denser city than Nara and Kyoto. On top of that, I made the mistake of coming here during a Chinese holiday, a week to be precise. The crowds of a Japanese metropolis are already quite overwhelming, but the presence of thousands of Chinese tourists made me feel like I was in a constant Black Friday Sale.

I was wondering what the subway would be like, but after all it wasn’t that bad. Everything is well organised as you would expect from Japan. There are nine transit lines in total, but in theory I only needed about two of them. The Midosuji-line and the Chuo-line took me everywhere I needed to be. From my own experience, it’s best to purchase a prepaid card like Icoca or Pasmo, this saved me a lot of time during rush hour. Ordinarily I wouldn’t suggest travelling during rush hour, however it’s a once in a lifetime experience in Japan. That’s how I was able to really notice how organised and punctual Japanese transportation is.

As soon as I saw the giant billboard of Glico Running Man, Osaka’s most iconic billboard, I knew I was in Dotonbori, Osaka’s most entertaining neighbourhood. Thousands of tourists gather around the Glico man to pose for their own unique photo, so I should count on a short waiting period if I happened to have the same idea.

Another iconic image in Dotonbori is the giant ferris wheel of Don Quixote. No matter how ostentatious it may be, for only ?600 I had an amazing view over the city. Alongside the Dotonbori river, there is a riverwalk where I experienced the characteristic liveliness of this neighborhood, going from street musicians to the well-known street food. The moment I saw the giant queue outside a tiny little bar called Kukuru, I knew I was in the right place for some amazing Takoyaki. In a small alley behind the river, I came across a cute little coffee shop that was so small, that the owner (a typical old Japanese woman with little knowledge of the English language) had to go out the backdoor to enter through the front to bring us our order.

There is a hidden temple in the backstreets of Namba, great for escaping the hustle-bustle of the city. Hozen-ji, a small oasis of peace in the middle of this metropolis, has a statue that is fully covered in moss. A perfect place to take a little break of the city.

Close to Namba station I found a very small Yakitori restaurant called Yumedori. Just like most Japanese restaurants, there is room for about ten people. During my time here, I noticed the owner and the three other customers kept glancing my way. Something I was already quite used to because of my tattoos. After a while the owner started talking to me, even though it was hard to break through the language barrier. Not a lot of tourists find their way into his restaurant he told me. After a delicious meal, he asked politely if he could take a picture with me, after which the other customers wanted to be included in one too.

The perfect way to end a day in Osaka is going to a specialty bar of Japanese whiskies. If you’re into loud music and crowded bars, this is definitely not the place for you. There is barely room for four people, but the owner was giving me enough information about every whisky he served.

To find the right amount of culture, and to educate myself a bit more about the history of this city, I went to Osaka Castle. It’s impressive how a building of this proportion and historical value still holds its own among the tall apartment buildings. It was raining the entire day, but these raindrops really did justice to the castle. On the fifth floor, accessible by an elevator, is a whole exhibition about Hideyoshi Toyotomi, the founder of the castle. I got a clear view of life in the 16th century through all kinds of different artefacts.

For further information on the cultural heritage of Japan, I found several museums throughout the city. Some of them are:

– Osaka Museum of History: plenty of information about the history of the city during its time as the capital

– National Museum of Art: collection of Japanese modern art, but also from the rest of the world

– Momofuku Ando Instant Ramen Museum: the first instant noodle was created right here in Osaka. This museum gives every bit of information about the history of this savoury meal. There was also the possibility to create my own noodle cup, which made a great souvenir.

Another cultural highlight is the Shitenoji Temple, the first Buddhist and oldest administered official temple of Japan. A spectacular view to see something like this in a crowded city like Osaka. Their five-story pagoda is one of the few I was actually allowed to climb in Japan. Each floor was decorated with thousands of golden replicas, each with a different writing on it. The building right next to it held two large Buddha statues, one that was sitting and one standing. Right outside the temple is a pond where dozens of turtles swim around. A long time ago, these turtles were dumped here by their owners; The compassionate monks began to care about these poor animals, which made their numbers increase exponentially. A great way to amuse myself, watching the turtles push each other off the rocks.

Another fun way to pass the time is of course the aquarium. It isn’t that different from most other aquariums, but here I could watch real whale sharks. This was the second time I was able to see these magnificent creatures in real life. The aquarium down in Atlanta has some as well. Another interesting subject is the dissected basking shark that was captured back in 2016.

A colourful area west of Tennoji, filled with dozens of tacky restaurants I didn’t even want to enter at first sight. The most famous landmark is of course the Tsutenkaku Tower. Shinsekai, what literally means ‘New World’, was built in the early 20th century as an entertainment district. New York and Paris were used as a model, and because of the modern image of it, it quickly became a tourist hotspot. The Tsutenkaku Tower was built in 1912, after the image of the Eiffel Tower and Arc de Triomphe. The Tower is filled with souvenir shops and has two observation decks. The entrance fee to get all the way to the top is ?700, a small price for a stunning view of the area. At busy times, the waiting time can reach up to about an hour, which I experienced first-hand. The best time to visit is late at night on a weekday.

In short, Osaka is a great alternative after having visited Tokyo before, and wanting to discover yet another Japanese metropolis. It offers the perfect mix of culture and vibrant nightlife that Japan has to offer. There is something for everyone. Amsterdam offers daily flights to Kansai

Nick is a writer from a small town in Belgium who likes to
combine these two passions: travel and writing. He has written
two novels and is currently writing his third.