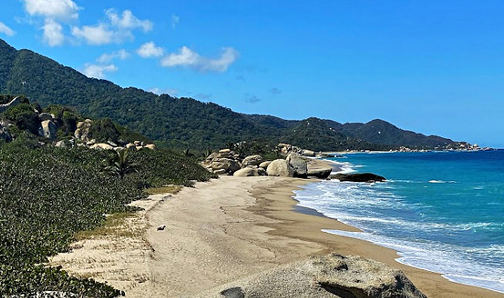 I have a problem with procrastination. Actually, I wouldn't call it a problem. That insinuates that it creates a detriment to my daily life. It never does. Somehow among the hours wasted, I manage to finish whatever task needs to get done. I'm a successful procrastinator. Just because something gets done at the last minute, doesn't make it any less done at the end of the deadline. Hiking Parque Nacional Tayrona in Colombia was no exception.

One of the Vague Maps of Tayrona ©2020 Sky Ariella

Tayrona Nacional is one of the top results from the search 'best places to go in Colombia'. Falling in line, right behind the cities of Cartagena, Medellin, and Bogota. It's one of the most popular attractions of the Colombian Caribbean Coast, which initially made me a little wary. Call me a travel snob, but I always prefer less touristy attractions. Maybe it's a side effect of having to walk through Times Square, the world's worst tourist lure, whenever I needed to catch a train out of Penn Station. I get chills just thinking about it, and not the good kind.

Whenever I see a place in a Google top five results, I usually aim to avoid them. Tayrona was a little different. It wasn't just a stretch of overpriced souvenirs, loud music, and drunk tourists (*cough … cough*, Khao San Road). It had the possibility of being overcrowded and overhyped, but it was a piece of nature. That meant, there was a better chance that it was touristy for a reason. I could deal with long lines of groaning tourists for that.

It wasn't until after my flight to Colombia had already been booked that I did a little more research into Tayrona, and found out that the park was closed every year from January 28th to February 28th. Perfect timing for my trip, which fell directly in that timeline. My best friend Garland and I arrived in Cartagena on January 13th. Allowing about two weeks around the coast before narrowly making it to Tayrona before the end of the season.

Example of the Street Art in Palomino ©2020 Sky Ariella

The thing that usually happens to me, once again, happened. Distraction. After arriving in Cartagena, I immediately got swept up in all the excitement of being in a place completely new. The sights, people, smells, currency. Immersed in everything different always has a funny way of making my plans go out the window. Weeks passed. Before I knew it, Garland and I were in a village called Palomino, discussing the way to Tayrona. The realization dawned on me of the time limit. I checked the date in Google calendar, with a little fear pulsing in my chest.

There was no time like the present. I immediately booked a hostel just outside the entrance for the night and planned to start the hike as soon as the doors opened at 8 AM the next day.

Doesn't make it any less done at the end of the deadline, am I right?

The Gates of Parque Nacional Tayrona

I awoke at 7 AM (before Garland, as always), scarfed down some free hostel breakfast, and hopped on a 2.000 Peso bus ride down the road to the entrance of Tayrona. Upon arrival, I was greeted with the costs of insurance, a ticket, and baggage storage for entry. Altogether, it ended up being around 75.000 Pesos (around 22$) per person. After paying our dues, Garland and I fell into line with hundreds of tourists, waiting eagerly to spend their day exploring Tayrona. A line of procrastinators that took about an hour to get through. With Garland getting fed up halfway through and sitting on the ground in protest of lines everywhere. Throughout the wait, Gar and I kept exchanging glances of doubt at each other.

Was it really worth it?

Paying all this money (a lot when it came to Colombian Pesos), waiting in a line moving at a snail's pace, dripping sweat as if we'd bathed in it, and for what? To essentially walk up a mountain. To two people who were raised in the heart of the Adirondacks, it was beginning to seem like a rip-off. But, nearly an hour had been burned to wait in the line and the entrance was so damn close. There was no turning back.

A Beach inside Tayrona ©2020 Sky Ariella

After a mere lifetime, the entrance was behind us. A feat of short-lived excitement, as I met with the outstretched, uphill pavement road towards the true beginning of the trail. I'd expected to walk through the exclusive gates to Tayrona and find a breath-taking forest. Instead, there was this unremarkable road. People taking moto-taxis to the beginning of the trail were flying past us. Starkly staring at us from beyond the glass as if to say, "What the hell are you doing? Get in a cab!". Gar and I kept giggling about the fact that, although the forest around us was lush and beautiful, it was nothing more than a regular forest with a road going through it. Something similar to the places we'd seen before. My fears that Tayrona was just another overrated tourist spot were being realized.

After about thirty minutes of panting, the road met the 'official' trailhead. Men selling ice cream and water promptly swarmed, exclaiming "only 3.000 pesos".

I may or may not have bought a mango, pineapple, and strawberry. In the hopes of a sugar rush, before moving along. Now, the real journey began.

Jungles, Beaches, and Deserts (oh my!)

Paved roads quickly dissipated into dirt roads and rocky paths. The 'regular-looking' greenery melted into wispy branches and bloated leaves. Engulfing us. Becoming less regular every step. I was starting to understand why Tayrona was listed as one of the best things you could do in Colombia. It was awe-inspiring.

The deeper I got into Tayrona, the more the scenery morphed around us. It was like looking through one of those 1990's 3D Viewmasters. The ones that changed location in a single click. Transporting from the Pyramids in Egypt to the Great Barrier Reef, in conjunction with the satisfying switch of that lever. It was a simple switch in real-time. We'd be walking through a never-ending jungle, only to have it open up into the desert scene of tawny boulders. After walking through the maze of bloated sandstone for about fifteen minutes, it would slowly disappear and be replaced by an outstretched ocean. Variations of blue dancing together in a way that always manages to stop me in my tracks. Akin to the blueness surrounding the islands of Cambodia.

Tayrona took me to a new place every fifteen minutes of walking. I might've gotten a touch of whiplash from the constant changes if it weren't so incredible. A hike that started with me watching a baby monkey effortlessly switch from viney tree to tree, and ended with me wading in aqueous Jolly-Rancher sea. With a bit of barren desert in between. Constantly surrounded by daunting mountains in the distance. That's what makes Tayrona a special place to be. It was something different from anything I'd ever experienced. It changed around me. Taking me to places that I couldn't imagine would all fall under the same title of 'Parque Nacional Tayrona'. It's a discombobulated wonder that took me by surprise.

The Jolly Rancher Seas of the Caribbean Coast ©2020 Sky Ariella

I'm a bit of a skeptic when it comes to places everybody loves, but I'm also a person who loves my skepticism being proved wrong. Tayrona exceeded my expectations in this department. I went in thinking, maybe my procrastination was happening for a reason. That it wasn't worth the detour, time, or money. That I would leave the day feeling like all I'd done was walk. That's not what happened at all. I left Tayrona at 5 PM, after six hours of hiking, craving more. Wishing I was one of the people who had pitched a tent for the night and woke up to the views Tayrona had to offer the next morning. Thanking God that, despite my eternal procrastination, I managed to make it to Tayrona just under the wire. Immersed in the thought that some places really are touristy for a reason.

Eger, The Jewel of Hungary’s Wine