Swimming with Turtles in Maui 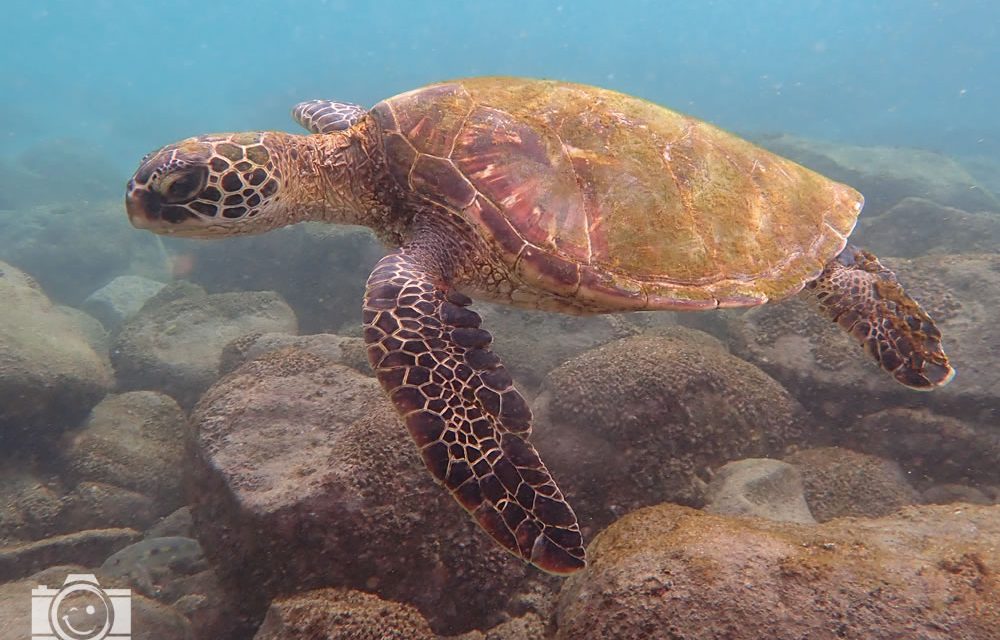 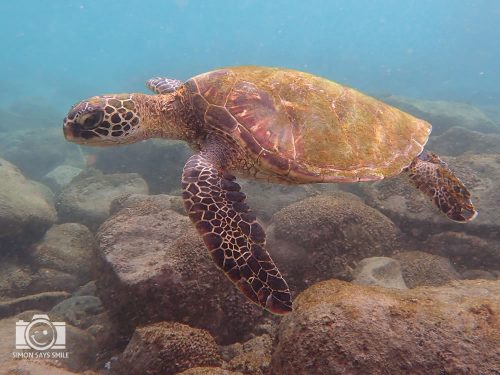 Swimming with Turtles in Maui, photo by Simon Hedley 2019

Maui and their Memorable Turtles

I remember seeing this great poster at the airport, I forget what it was for "“ as is often the case with advertising "“ but what stood out were great turtles swimming through the ocean.

I've always loved the ocean and the idea of snorkeling was already on my list for a trip to Maui. I had brought my small underwater camera. I had swum around the world before and even glimpsed sea turtles before but never like the poster, not with such clear visibility and bright colours.

For the first week I stayed in a hotel in Wailea, on the south of the island, and the weather wasn't great "“ unusual for Maui "“ the trade winds were up and the few times that I went into the ocean, all I could see was sand, not many fish and I started to get disappointed. Was this really all there was?

In the swimming pool at the hotel was a giant turtle mural which got me thinking about turtles every time I saw it.

I walked along the coast path between the hotels and saw someone pointing out to sea at a great moving rock was floating for a second before vanishing below the surface. That was a turtle. I couldn't believe the size, and then it was gone again.

Talking to the people who work at the hotel they said there are lots of turtles all along the coast and to remember "That turtles aren't like trees and love to swim free "“ oh and also don't touch the turtles or bother them" (important as the animals in Hawaii are very protected and rightly so).

People I spoke to kept talking about their experiences "“ coming across turtles on the beach at night, seeing them in the ocean, it seemed almost everyone was having their turtle experiences except me.

The weather improved and the ocean was calling beautiful turquoise blues and the temperature seemed to be just right.

Not Swimming with the Turtles of Maui, Yet

When I went snorkeling around Kihei, Wailea, Lahaina and even up in Napili I saw incredible fish and coral but after a month, no more turtles. Well, not for me.

A business partner from London came to visit to celebrate me in Maui to celebrate my birthday and have her own magical Maui experience, and the first evening she arrived we decided to walk along the coast path. Suddenly upon the rocks were not one but two turtles eating. I could hardly believe it – her first day and there they were.

For nearly an hour we sat and watched them, as the strong waves came in and out, and they navigated around the rocks with ease. I couldn't' imagine how they were so at home in that environment. They were huge over a meter in size. The camouflage colours on their shells were green, brown, and everything in between hiding them as the waves washed over them merging them between the ocean and the rocks. Then with a gentle flick, they turned and were back in the ocean and vanished.

This encounter had me all the more excited and as we talked to a new friend in a restaurant who shared that he knew a special spot where he always saw turtles when he goes snorkeling. Thankfully he didn't just tease me he offered to take me the next day.
We set off in the early afternoon, the sun was up and the weather warm and we drove up to the north of Kihei to near the Kihei Canoe Club.

There an old jetty had fallen back into the ocean, and he explained to me that meant it was the perfect safe haven for fish and the sea greens the turtles love to eat.

We got our snorkel gear on and set off. I had high expectations though did my best to resist them and just enjoy the moment.

Shoals of fish were everywhere, bright colours, some translucent, but yet no turtles.

We kept swimming and exploring, looking at the corals so many shapes and I marveled at the brilliance of nature. It was definitely a wonderful spot and not one I would have ever found without my guide. 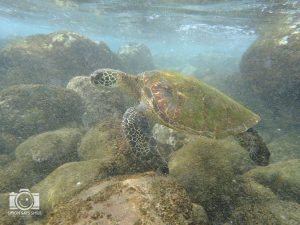 We were about to head out of the water and call it a day, and then suddenly out of nowhere over my shoulder I saw a large shape. Then out of the rich blue sea was a green and brown turtle. It seemed to hover in the water, even as I was swimming to stay still against the gentle currents that wanted to wash me back to shore.

The turtle swam towards me, which I never expected, it seemed as curious about me as I was amazed by it. The way it just glided through the water, moving without effort was mesmerizing. The light rays coming through the waves shining on its shell. The visibility was good, like a scene out of one of those wonderful natural history documentaries.

Luckily, I came prepared. I had a camera in my hand and began to take photos. To be honest, I could hardly see what I was shooting and was just amazed to finally see the turtle in its natural home of the Maui waters. The experience took my breath away. Time stood still and I swam alongside watching the turtle happily. My friendly guide caught my eye and gave the "OK" sign and I did the same. This was definitely "OK".

The turtle dove down deep and with every stroke of its flippers the blue of the sea merging together as it seemed to vanish. It was interesting seeing how the clear ocean water became blue and solid, this wonderfully alien domain where turtles majestically surf their flow.

As my new turtle friend slipped away, we started to swim back towards the shore and my arms warmly tired. Then out ahead was not just one but two turtles again, this time much smaller again eating from the rocks.

I found myself wondering "How do turtles talk to each other and do they do it underwater?" "Do they live in families?" 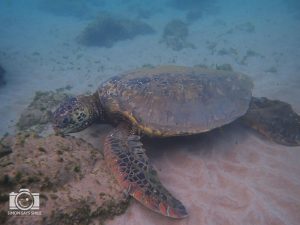 The two small turtles were playing, surfing the currents through the rocks and coral. I admit I stayed back as the idea of being pushed onto the rocks didn't appeal, but thankfully the water had good visibility. I did my best to film but it was a challenge (a fun one) between watching these turtles who could spin and change direction with the flick of a flipper, doing my best to position myself for a shot and keep the camera pointed in their direction while all I wanted was to watch.

Perhaps this was a new hobby or career of underwater nature photography. I could see how it could become addictive as each encounter was different and each sighting brought that subtle but unmistakable feeling of something wondrous and special.

The turtles have big eyes and when they look at you there is that sense of connection crossing between our different worlds.

We ended up back on the beach and he smiled, "Told you so, turtles as I promised."

From then on, I went back to this secret spot and every time saw turtles – sometimes straight away and sometimes after 30 minutes. Each time different turtles and each time a unique experience.

Looking back at the photos from dry land with a cool drink in the evening it really was a magical memory and something that I know I'd love others to experience and share.

Then something happened, I went for a quick swim in the beach down from where I was staying and again turtles. It's almost as if a switch had been flicked. It made me wonder how many other things in life are like that. Things invisible and beyond reach until an invisible switch is flicked on (or off).

For more stories featuring Turtles because they are so cool.

Written and photographed by Simon Hedley

The Must-See
Museums of Bentonville