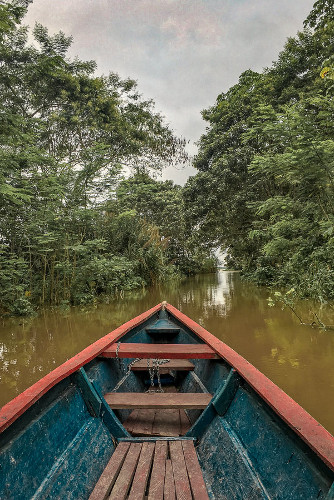 The Amazon of Childhood Dreams

Turbulence. An immense sea of green. My first impressions of the Colombian Amazon. A place I had dreamed of seeing ever since I was a little girl.

One rough landing later, I was taking my first breaths of the heavy humid rainforest air. It seemed millions of miles from Colombia. Completely foreign. The airport is small, just a single room filled with older travelers and Colombian locals filing off their planes. Just outside bicycle tuk-tuks and taxi’s lay in wait to deliver us to our Airbnb.

We had booked nothing but the first night’s stay in Leticia. We had no idea where our journey would take us but we knew we wanted to do it ourselves. No group tours. No convenient jungle resort excursion. Just us and the wild Amazon.

We took this first evening to explore Leticia. Sitting on the border of Peru, Colombia and Brazil surrounded on all sides by hundreds of miles of rainforest, this town is the gateway to the Amazon. 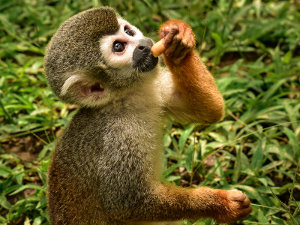 Life in the Jungle

It was rainy season so the banks of the river had flooded spilling coffee-colored waters into the village. Locals had adapted. Building their houses and crafting walkways on stilts-some 15 feet tall. We followed the walkways, passing kids floating on a makeshift Styrofoam-block canoe. Vultures, Egret, and herons walked alongside us. Longboats coming from the main tributary of the river docked nearby, precariously unloading 2,000 lb bulls from the shaky boat. The river was the only way to get supplies in and out of the town. It became clear to me then the reason Leticia felt so rough around the edges was its isolation.

The town had all the typical charms of a rural village. A few intriguing, although empty, restaurants and shops selling all the supplies you would ever need to survive. The streets were completely flooded from the rains earlier in the day, but no one was phased in the slightest. Motorbikes and tuk-tuks just plowed through the knee-deep water soaking those around them. Wet was just something you learned to live with in the Amazon.

The parrots were really something though. You could hear them before you saw them. Just before sundown every single night, the main square filled with thousands of small green screeching parrots looking for a place to nest. We climbed the steeple of the church to get an aerial view of them pouring in from the jungle. Little green bullets of green shooting through the skies beneath us.

We met Armando late in the afternoon. A native to the Amazonas region who chose to make a living providing travelers with a private excursion into the jungle. We agreed to meet him in the same spot early the next morning. We were told to bring long sleeves, bug spray, and a flashlight- he would take care of the rest.

At the break of dawn the next day we climbed into a wooden long boat. Just the two of us and Armando. We motored up the Amazons dark waters passing stilted homes and Egret. Torrential downpours intermittently slowed our progress. But after several hours we headed down a tributary to the edge of the rainforest. 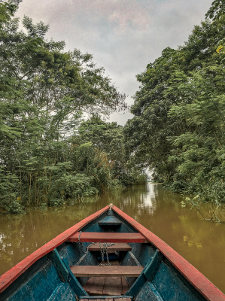 Canoeing Over the Canopy

A small canoe had been tied to brushline. Big enough for just the three of us. We traded boats and began floating across the dark waters into the depth of the forest. Now, Armando spoke no English and our Spanish was broken at best. We had gone into this journey not knowing at all what to expect or what we were up against.

The ride was peaceful for the first 50 ft or so. Floating in the tree-tops of the Amazon jungle. A cacophony orchestra of animals sounded around us. Then the chopping started. Gliding through the tree-tops was easier said than done. Changing water-levels completely erase any past trails made into the jungle. Armando was left to machete chop our way through the forest and blaze his own trail into the wilderness.

Armando’s wildly swinging machete just a foot in front of my face had other consequences as well. With every chop, the insect life of the Amazon rained down on us from above. Spiders- fist-sized, stick bugs, every species of ant imaginable. Armando’s shorts, t-shirt, and barefoot look seemed even more out of place now. It took one blue-tinted arachnid landing on my shoulder for me to zip my raincoat up to my eyeballs and cinch my hood up tight. If you thought the Amazon was a glamorous place to travel you were very misinformed.

6-hours of canoeing and we were swallowed up by the jungle. Complete exhaustion was staved off by wildlife sightings. 3-ft long Iguanas perched on fallen logs. Swimming snakes weaving across the surface of the glassy water. Squirrel and howler monkey’s sneaking through the tree-tops above us, hoping their silence would conceal them. Colorful macaws soared high above our heads. Armando spotting each well before we could with our untrained eyes.

Just before sundown, we reached a break in the trees. A still lake. Skies painted soft pink. A floating platform had been constructed along the outer edge, perched on top was a single room shelter. The three-hammocks strung up inside was where we would sleep for the evening.

We took a sunset tour of the lake. The most serene moment in my life. The water was still aside from our canoe gliding across it. Birds drifted above our heads searching for their nesting places. And as the sun lowered in the jungle, the volume rose.

Armando prepared us a candle-light dinner of rice, beef, and veggies that we practically inhaled after the long day. And just when I thought it was time to curl up in the hammock and drift asleep, we were back in the canoe.

In Search of Caiman

Using the flashlights we had been instructed to bring we drifted around the lake, in and out of the jungle tree-line looking for bright reflective eyes. We used their frog-like chirping sound to guide us in our search. I worried about what would happen if we came across a large one. I was painfully aware that if something happened to Armando on this journey, we would be swallowed by the jungle forever. No path out, no one to know where we were, and only enough food for a day or two.

But an hour later we were drifting asleep in our hammocks.

The rains in the Amazon are powerful. The mid-night storm woke me up with a clap of thunder and then kept me awake with the drumming of rain on our metal roof. The sheer power of nature was on full display. Somewhere along the way, I did fall back asleep. And when I woke in the morning Armando was rescuing our half-sunken canoe. Using a sliced in half-two liter bottle he methodically scooped last night’s storm out of our seats. 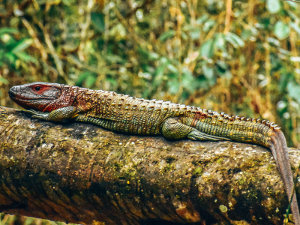 Close-up of an Iguana
©2019 Geena Truman

He had been awake long before us. Hot coffee, eggs, and fruit were already sitting at the makeshift table in wait. He procured an odd tan-colored spherical fruit- called Zapote. The fruit of the Amazon. With one machete whack, he opened it to reveal melon-colored insides that tasted mildly sweet and stringy. It takes 5-years for a single fruit to ripen on the tree. Good things take time in the Amazon.

And then it was back in the canoe for the return trip. Our man-made path swallowed by the jungle in last night's downpour. Left to chop our way through yet again. This journey had been one of raw exploration. We hadn’t encountered another soul along the way. And I had felt a part of the Amazon. Something you can’t get from a crowded tour. An elevated risk provides a sense of elevated reward.

Geena Truman is a freelance travel writer constantly on the move. From climbing active volcanoes in Indonesia to braving hurricane-force winds on a wintery Icelandic road-trip; She always prefers her travels to be an adventure. With a passion for exploring the unknown and digging out the off-the-beaten-path experiences she finds beauty in the messy chaos of life. You can follow her journey at www.bartenderabroad.co 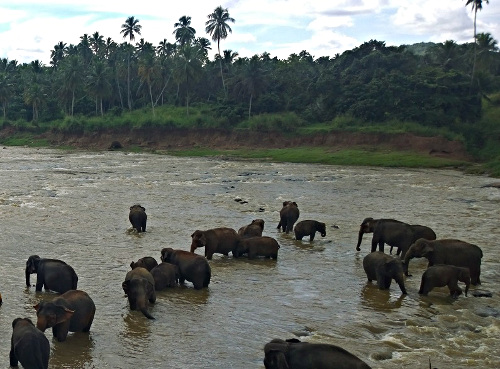 Breakfast with the Elephants of Sri Lanka