In A Tramp Abroad Mark Twain mentioned in passing two waterfalls located in central Switzerland. Meiringen has "beautiful cascades that leap from those rugged heights, robed in powdery spray, ruffled with foam, and girdled with rainbows — to look upon these things… was to look upon the last possibility of the sublime and the enchanting." Meiringen's museum and statue honor Holmes, not Huck, because Sir Arthur Conan Doyle had Sherlock murdered in 1891 at the nearby 656-foot Reichenbachfall by Prof. Moriarty, that "Napoleon of crime."

The other torrent Twain commented on was "beautiful Giessbach Fall… near Interlaken, on the other side of the lake of Brienz… illuminated every night with those gorgeous theatrical fires… a spectacle which the tourist ought by no means to miss." And I didn't — the waterfall forms a dramatic aquatic backdrop for the elegant Grand Hotel, originally built in the 1870s. I climbed a lovely, leafy path beside the long and winding Giessbachfall, which remains lit up nightly. The water surges powerfully off of the mountainside, plummeting for 500 meters down from the Faulhorn-SÃ¤gis Valley toward Lake Brienz. The cascade's booming, torrential drop is broken up in 14 stages, which the path parallels.

Although it was June the spraying water cooled the air like air con au naturel, so make sure to bring a jacket or sweater when trekking beside Giessbachfall, as well as wear a good pair of hiking boots. The torrent's thunderous roar is stilled in the winter months, when the waterfall is literally frozen solid. At that time hardy Grand Hotel guests go ice climbing up the cascade. 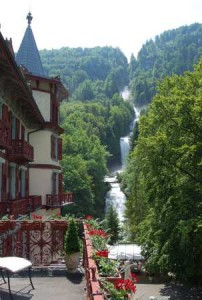 In warmer months less strenuous modes of transportation convey visitors up to the Grand Hotel and Giessbachfall. I took the train to Brienz, where a mini-bus or van at the station awaits arriving guests in order to drive them a few miles on a narrow, bumpy, twisting road up to the resort. Alternately, Europe's oldest funicular, built in 1879, still carries passengers sailing from the Brienz train depot, or perhaps Interlaken, up from Lake Brienz "“ which is crossed by boat "“ up to the ornate establishment.

Grand Hotel Giessbach oozes Old World charm, accompanied with exquisite expansive views from romantic verandahs and suites of the lake, Alps and, of course, the booming flume, which are simply wunderbar. The five-storey white and rust brown palatial structure includes a peaked, chalet-like roof, quaint turrets and 19th century furnishings "“ chandeliers, a metallic clock with Roman numerals that had required rewinding two or three times a day, turn of the last century furniture, plaster angels either floating or festooned to the ceiling, regional arts with a strong Swiss flavor, a billiards room and, in a concession to 21st century sensibilities, a TV room. There is also a seminar room; this Alpine enclave is an ideal location for conclaves and the like because perched on high, it's rather cut off from the outside world with its endless distractions.

There are around 70 rooms and tower suites. Mine featured a dead on eye "“ and ear — popping view of that glorious waterfall, which, when the window was open or from out on the verandah, was quite sonorous, putting the "Bach" into Giessbach. The furnishings, dÃ©cor, quaint architecture of a bygone era, and of course the grounds "“ which include a swimming pool (the water was freezing in mid June!) and tennis court "“ conspire to create a transcendentally romantic ambiance.

Grand Hotel Giessbach features two fine dining restaurants, and eating outdoors on the terraces near a glorious gazebo is especially delightful. Le Tapis Rouge has a Mediterranean menu "“ and prices above my means. So your humble scribe feasted on a salad with pine nuts and lemon sauce, melon and strawberries, turkey stew with delicious veggies and potatoes au gratin, and a nearly frozen Black Forest parfait, in the Park Restaurant. As a live pianist tickled the ivories I sat facing the awe inspiring Giessbachfall, which "“ as in Twain's time "“ was glistening in the glare of manmade lights, eventually dimmed sometime late at night. 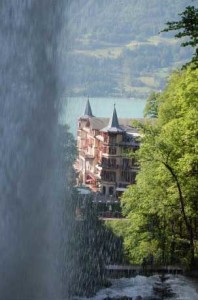 The original Grand Hotel, a favorite of the Euro-elite, burnt down in 1883 and was rebuilt the following year. Its fortunes waxed and waned during the 20th century, but by 1978 the so-called "Dream Castle at Lake Brienz" was threatened with overdevelopment and the prospect of transforming the 19th century palace into what the vintage venue's website calls "a new concrete-jumbo-chalet-type-hotel." The resort was spared the wrecking ball by an unlikely savior, uber-environmentalist Franz Weber, whose conservationist organization "Helvetia Nostra" (which can be translated as "Our Switzerland") rescued and restored the Grand Hotel.

The property remains ideal for romantic weekend getaways or business seminars; however, beyond that, here at this rooftop reserve overlooking lake, mountains and falls, one may contract the Alpine equivalent of "island fever." But Grand Hotel Giessbach is indeed a once in a lifetime return to 19th century gracious living and nature, where one can be swept away by the rush and roar of water that flows with all the majesty of Mark Twain's mighty Missippi River.