Two Wheels Through Terror: a Review

Road travel is one of the best ways to see the world and when it is done on a motorcycle it is even better. On a motorcycle the entire journey gets redefined, it is dangerous, thrilling, down to earth, soul-searching and spiritually uplifting. Whether in bustling city roads or huge truck-dominated highways, a biker always presents a picture of adventure and freedom. There are numerous dyed-in-the-wool bikers who have traveled round the world on their trusted motorcycles.

Cut to modern times, every biker needs to be aware of the numerous hazards of cross-country running on a two-wheel machine. He has to negotiate unruly truck drivers, bandits, vehicle snatchers, naxalites and terrorists among other perils on the open highway. Into this scenario arrives Two Wheels Through Terror written by adventure motorcyclist and traveler Glen Heggstad as a boon to bike enthusiasts. This book is a first-hand account of an ambitious motorcycle journey through South America that gets horribly, and violently, detoured. It's as much a travel diary of a motorcycle odyssey as a story about bravery in the face of terror and perseverance in adversity. 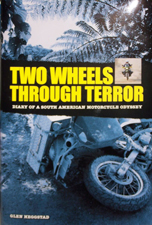 Heggstad aka 'Striking Viking' has driven custom-built Suzukis across the most rugged terrains worldwide and is a former member of Hell's Angels "” the largest motorcycle riders group in the US "” apart form being a martial arts expert. His biking adventures have been featured on NPR and CBS's 48 Hours. Currently in Asia on yet another round-the-world motorcycle tour, Heggstad has his permanent residence in Palm Springs, California, where he owns and operates a martial arts school.

Divided into four sections featuring maps and top-quality pictures of South American landscapes, the book begins with the profile of a confident man preparing to zoom away from the safe confines of his home to realise a dream and ends with a dazzling display of determination and courage. “Warriors claim that battles are won in the preparation. This is a personal battle for which I am preparing "” a battle to survive the adventure through Mexico, Central America and the West Coast of South America to the tip, across the Straights of Magellan to the island of Tierra del Fuego, and back up the East Coast "” on a 650 cc dual-sport motorcycle. A 25,000 mile ride through blazing deserts, freezing mountain passes, sub-Antarctic wilderness, and steaming tropical rainforests,” writes Heggstad in his introduction.

Two Wheels Through Terror is perhaps the most thrilling and absorbing motorcycle adventure travelogue ever written. Both diary of a motorcycle pilgrim and survival guide, this book should be standard reading for any daredevil motorcyclist who plans to hit country roads, and especially for bikers planning cross-country travel in India, infested with militancy in Jammu and Kashmir, the naxalite-insurrectionary states of central India or the lawless BIMARU (Bihar, Madhya Pradesh, Rajasthan and Uttar Pradesh) jurisdictions. While biking through the rebels-dominated northern district of Columbia, Heggstad was kidnapped and held for ransom for five weeks by the rebel army Ejercito de Liberacion Nacional (ELN).

A compilation of events recorded by Heggstad during his journey, his capture, escape and eventual realisation of a dream, Two Wheels Through Terror is a gripping story of a bike adventurer robbed of all and frog-marched through fly-infested tropical jungles with assault rifles pointed into his back. But given his preparation in terms of proficiency in martial arts, unarmed hand-to-hand combat and shrewd thinking, he overcomes.

Once free, Heggstad does not return home. Not a bit bogged down by the violent torture he had to suffer, Heggstad arranges for another motorcycle to be despatched to him in Columbia to continue on the high road to adventure through Ecuador, Peru, Chile, Argentina and Brazil. The rest is smooth riding, by his standards of adventure from which automotive two-wheeler enthusiasts worldwide can derive great inspiration and knowledge.

Cruise the Rajang River for the First Time