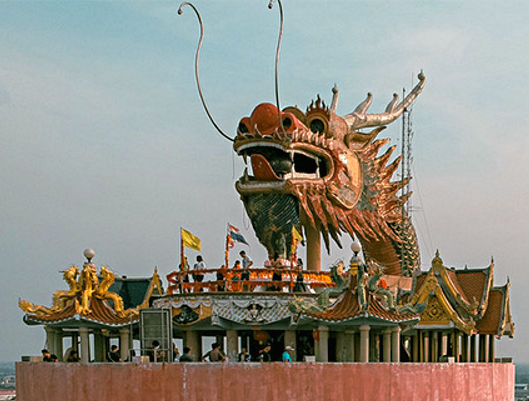 The lookout point from the top of the Dragon Temple, Wat Samphran ©2020 Alysha Duff

I first saw it on Instagram and thought, "is this real?" I'm talking about Wat Samphran, Thailand's iconic “Dragon Temple.” I instantly saved a picture of the temple to my Instagram account and thought, "I must see this for myself before I leave Thailand." It turns out the Dragon Temple is indeed real and it looks just like a fairytale.

Approximately 40km outside of Bangkok in the Nakhon Pathom province (in a far, far away land) sits a magical pink tower guarded by a big green dragon wrapped around its exterior. When the temple first appears in eyesight as I drove in, it truly felt like a fantasy. How is there this magical-looking structure out here in the "middle of nowhere" Thailand? I was absolutely enamored.

The entrance to the dragon tunnel of Wat Samphran, aka the 'Dragon Temple' ©2020 Alysha Duff

To add to its already mysterious nature, very little information is actually known about Wat Samphran, not even by the locals. There seems to be no knowledge of when this temple was constructed, who designed it or how long it was actively used for Buddhist practice. But now, it appears to only be used as a tourist attraction and for locals to give offerings. There are monks on site and temple workers who manage donations, but that's about it. Because of its off-the-radar location and the little information available, not many people venture out to visit. Upon my arrival, there were a handful of local Thais and only two other westerners. It was actually quite refreshing to observe such a beautiful attraction without the mass crowds. I felt like I had discovered a hidden gem.

The enchanting Dragon Temple is unlike anything I've ever seen before. Between the mystical dragon and the pink color scheme, the building looks like its plucked right out of a Disney movie. It brought to life all of my childhood fantasies. And as if looks weren't enough to have me completely mesmerized, the way I had to get to the top of the temple is through the dragon. Yes, the dragon serves as a tunnel from the base of the tower to the rooftop and is the only way up. There is no elevator or staircase, only the concrete tunnel of the dragon's interior. Walking through the dim-lit tunnel with no windows and no concept of when I was going to see the light at the end of the tunnel was both strange and exciting. But, the feeling I got when I finally made it to the top (out of breath) was exhilarating. When I sat in the windowsill of the temple, I felt like a princess waiting for my prince in my dragon's lair. The story of Rapunzel never had such a significant meaning until now.

A bird's eye view of Wat Samphran, aka the 'Dragon Temple' ©2020 Alysha Duff

The 17-story tower isn't the only structure on the property. In fact, the Wat Samphran is situated on an entire religious complex. There are numerous giant animal statues planted throughout, including a peacock, elephant, rabbit and turtle – all of them significant to the Bhuddist religion and folklore. There are also footprint molds on the walkways that wind throughout the property. I didn't see an explanation for these, but I think the prints may signify the original monks of the temple. Between the mystical dragon and the super-sized animals, the religious complex has quite a whimsical character. But that's not all – there is also a fortune fountain. The fountain is also guarded by a dragon and has many targets where visitors can aim to toss money in. A different fortune is expressed at each target point. For example, if I successfully tossed the coin into the mouth of the dragon I will have power in life; if I successfully hit the bell with the coin, I will have fame. Unfortunately, I didn't hit any of the targets, so I'm guess I'm out of luck. I'm not sure what all of the donations that are collected in the fountain are used for, it certainly doesn't appear that its property upkeep. But, the temple’s dustiness, hollowness and semi-abandonment all add to its fascinating character.

The Dragon Temple was hands down the coolest, most unique temple I have ever seen. It was well worth the trek I made out to Nakhon Pathom to visit. If you ever find yourself in Bangkok, Thailand for a period of time, I highly recommend setting aside time to visit this amazing attraction.

Alysha is a communications professional from South Carolina who has recently taken to teaching English in Thailand. In her free time, Alysha can be found traveling around Southeast Asia and blogging about her experiences. To her, life's greatest pleasures are food, people, experiences and architecture. You can find all of these things captured on her website styledandspiced.com and Instagram @styledandspiced .

Travel in Place: A Covered Bridge Tour in Oregon

A Peak in Provence, France V