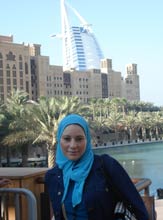 It's undoubtedly one of the most misunderstood symbols. The Hijab has been attacked many times, nationally and internationally. Whether you travel through America, Europe, or the Middle East one thing is evident: that you will see a Muslim woman wearing Hijab in some form. I am one of them; I reside in California and grew up in Orange County. I adore American culture, and like so many Muslim women, I choose to wear Hijab.

Hijab has many forms, and many looks. Each woman has her own personal reasons for wearing Hijab. This article is not meant to showcase one individual as correct or incorrect in her decision. Rather it is meant to explain the different looks of Hijab, and hopefully relieve some of the stigma associated with wearing it.

The first look, which is pretty common, and which so many Muslim women and I have chosen, is the headscarf with modest dress. I will speak for myself that I love to dress up, I love to celebrate my femininity, but I try to stay within Islamic guidelines of modesty while satiating my love of fashion.

The second look is the Abaya, which is a simple robe-like dress that falls on the body not hugging any curves. It is usually seen in black, but most women choose Abayas that have embroidery or even crystals on them. In some places like the Dubai an Abaya can cost upward of $1000 dollars.

The last, and often the most feared and heavily debated, is the Niqab where a woman covers her face and only her eyes are visible. Most people have flashes of oppressed women walking ten steps behind their husbands while drowning in the layers of cloth. I will not say that there are women in this world that are not forced to wear such dress against their will, but I will say that the women I have met in my life that have chosen this lifestyle as a way to strip away from this world and focus only on worshiping their lord.

Through my travels and interactions with Muslim women I have found most choose to wear Hijab and feel comfortable and confident in their decisions. They feel that Hijab keeps them close to what God has asked from them.

While on a trip to Saudi Arabia, I wore the Abaya in order not to stand out too much as a foreigner. I did not mind it, but itched to get back into my clothing. Most women in Saudi Arabia own hundreds of these robes, some embellished in Swarovski crystals. To some it is simply a cultural overthrow that is placed on their beautiful fashionable clothing as respect until they arrive to their desired destination; for others it is more for religious practice.

On one outing in Saudi Arabia I met Naeema, a 43-year-old mother and pharmacist. She had this to say about Hijab: "We are educated, we love fashion, we love to dance and sing and we enjoy life just like everyone else, we just dress a little differently." Naeema had felt hurt and frustrated while traveling through Europe she was verbally attacked and disrespected for her choice to wear the Abaya.

To respect, and to show one another dignity, is a universal language, which can best be practiced by understanding each other's cultural and religious beliefs. The only way to do this is through talking to others and in particular while we travel educating ourselves on different customs. From my life experiences, we seem to all be the same inside, we just look a little different on the outside. 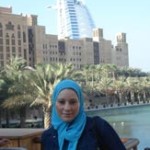 Ghada was born in Cairo, Egypt and lived there to the age of four before coming to the United States at such a young age. She feels immensely blessed that she has been immersed in the traditions of a different culture, and able to tap into another world in her creative endeavors. She finds that her children inspire her by the simplicity that they perceive the world. From that, she is able to let go of her complex views and see the world simply as it is. For more about Ghada and her writing, visit www.ghadabedair.com