Everyone, including yours truly, uses Automatic Focus when taking pictures in their travels. It's probably one the greatest inventions the camera makers came up with, until digital cameras came along and replaced film.

There are times, though, that Manual Focus Mode is the only way to go. One example is the Osprey I photographed at the Okinawa City Zoo, in Japan. I'm a wildlife photographer and forever buying longer and longer lenses, climbing cliffs and trees trying to get a shot of an Osprey that fills the frame of my photo. I'd much rather capture a wild bird in its natural environment than go hunting for the poor things cooped-up in a cage.

Zoos, do serve a purpose, though, they help educate the public about wildlife and sometimes help save endangered species, so, I applaud their efforts and try to use the photos they allow me to take as educational tools, as well. 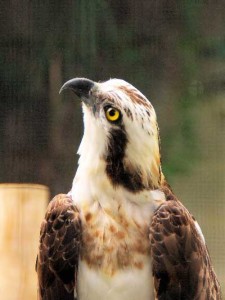 This bird is in a cage and if you look closely at the background you may notice the wire mesh behind him. There's wire mesh in front of him as well, but my camera made it invisible! How? Manual Focus Mode; if you're not sure your camera has this capability, check your users manual and you may be able to perform this magic trick, too!

In Auto Focus Mode, your lens is going to focus on the nearest object in its line of sight. In this case, my lens focused sharply on the wire mesh in front of the bird and the Osprey was just a blur in the background. I was whistling and talking to him to get a great bird portrait and he was cooperating, just my lens wasn't going along with the program! So, I switched to Manual Focus, twisted the lens by hand and moved my body around while focusing, until the cage disappeared.

There are plenty other occasions where Manual Mode becomes a necessity, even though I use Auto Focus most of the time. Wherever in the world you go, when you are at any spectator event, whether its sports, concerts, or festivals, people moving around close to your camera will drive Auto Focus wild, unintentionally, of course. Just switch to Manual Focus, get your subject in the sharpest view you can and ignore the crowds; they're ignoring you, aren't they?

Some cameras which do not have Manual Focus capability do have something to compensate for the "moving-crowds" problem and it's called different names depending on the manufacturer. If you have Auto Focus only, check to see if there is a selection of types you have available, if there's more than one, you probably have a One Shot Auto Focus and a Continuous Auto Focus to choose from. Select the One Shot Focus when there is movement around your subject, and once you press the shutter button halfway, the Auto Focus will stay locked until you take the picture. Use the Continuous Focus when shooting a moving subject or using 3-5 shot Burst Mode and you can catch birds in flight or sports events by freezing the action just like a Pro. Happy hunting, until next time!

A wildlife photographer livning in Okinawa, Japan, Mike has been featured in Matador Abroad and is published in Apogee Photo Magazine, Boots N all, The Nihon Sun and Photo Guide Japan. He has recently joined the ranks of travel writers, capturing Nature, Festivals, Castles and Cultural shots of the Ryukyu Islands to share with the world.