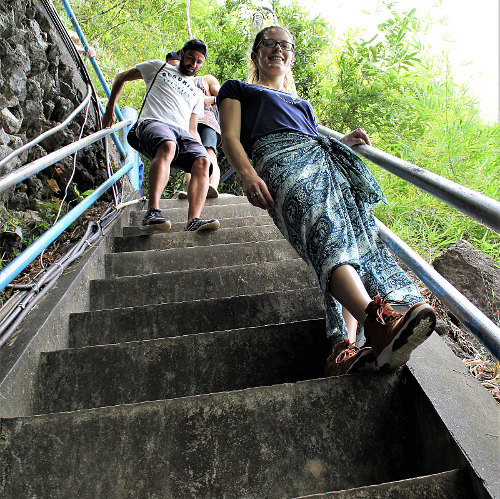 The thick air of Southern Thailand tugs at my ineptly tied sarong as I wait for the bus to take me to the Tiger Cave Temple, also known as the Tiger Temple*. The wind, yet again, frees my sarong from its knot and my legs are left bare, clad only in my running shorts, scandalous attire for the socially conservative country of Thailand.

Where is the bus? I have been waiting on the side of the road at an unmarked bus station where my partner said the microbuses to the temple normally stop for almost an hour now.

"Temple?" A Thai man in his mid-thirties leans out the cab window of an old, but sturdy looking pick-up truck.

I'm not sure why, when worried about a language barrier I start chattering yes like a broken wind up doll, but my poor attempts at communication seem to have worked. He points to the covered truck bed and kicks the antique engine back into life. My partner, Kane, and I jump in just before the truck speeds up the road and out of town.

From the Ocean to the Trees

As we leave the coast, the still-thick air trades some of its salty flavour for the fresh, earthy smell of the mountains. Bouncing along in the back of the truck, my ears pop with the change in elevation, the crowded homes of the city fall away, and soon we arrive at the foot of a verdant cliff. Mountains in Thailand are nothing like the granite peaks I grew up with in the Sierra Nevada ranges of California. Instead of the gradual build up into a towering, triangular peak, these mountains jut straight out of the ground, like some ancient, underground giant punched upward until a small plateau of greenery was high enough to have an ocean view. The strange sheerness of the mountain does not dissuade the prolific jungle and each monolithic spire covers an unbreaking layer of foliage. 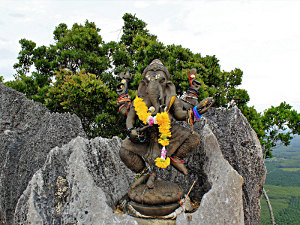 A Monk and a Tiger, Tiger Cave Temple

The Tiger Temple dates back to 1975, when a Vipassana monk named Jumnean Seelasettho chose to meditate in the cave. From there, the stories diverge.

In one iteration, there was a tiger living in the cave, who after years of tormenting the village below, was finally driven out by this one monk's bravery, prayer, and faith. In the more likely version of the story, Seelasettho simply saw tigers roaming the forest around the cave, therefore inspiring the temple's name, Wat Tham Suea (the Tiger Cave Temple in English). Whatever the origin of the temple, it is a truly unique place, a temple that stands far above the rest in this country of a thousand temples.

Before we begin our hike up the mountain, up 1,237 steps to be exact, I quickly re-tie my sarong, after all this is a sacred place of worship for the Thai people and modesty is required by all. Both men and women should cover shoulders and knees, but men can get away with shorts more than women can. I glance around the compound to see an angry Italian woman arguing with a monk about her short shorts and tube top. He hands her a rough piece of navy blue cloth and points at me. Awesome, at least I got the modesty thing right.

However, after only 239 steps I am already cursing my sarong, all thoughts of the monk gone. It is bloody hard to hike in a skirt, I conclude, wishing I had just opted for hiking pants. And who made these steps, a giant? I silently ask the universe as I hoist one leg just enough to clear the foot-high step, ending up in a single leg squat in the process. Look at me, doing single leg squats in a skirt. Here I thought Thailand would be all Mai Tais on the beach. 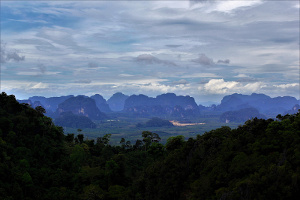 A Golden Buddha with a View

After dodging larcenous monkeys and navigating the stunningly inconsistent step heights, I crest the final step. I stand drenched in sweat, my hair is a mass of humidity induced frizz, and my skirt is falling off at a temple. In short, I'm haggard. Kane, who has been here before, drags my moaning self over to the railing with a "Babe, come look. You have to see the view."

He's right, the view is spectacular, nothing like I've ever seen before. The sheer Thai mountains rise amid the jungle to one side and the ocean front of Krabi Town is visible far in the distance to other. There is a huge golden Buddha overlooking the mountaintop temple with a street dog sleeping at its feet. We have gained 912 feet of elevation up steep stairs and there is a street dog here. I laugh to myself and remember the persistent street pup who followed me up the highest peak in Central America, Volcan Tajumulco. Street dogs are tough everywhere.

The red, white, and blue of the Thai flag snaps in the strong wind, a storm is coming in from the coast. Dark clouds begin to gather on the horizon and we decide to descend. Because of the peaceful silence, I soak in one last moment of this temple at the top of the world. Then I start down the stairs, my legs already quivering.

*While this temple in Krabi, Thailand can frequently be referred to as the Tiger Temple, I choose to use the other name, the Tiger Cave Temple, as to differentiate it from the Tiger Temple in Chiang Mai that let tourists pet drugged tigers for money and had been caught in a scandal in 2016 after 40 dead tiger cubs were found on the premise (likely to be sold to China on the black market). 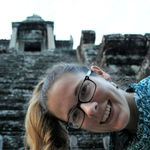 Monica is a directionally challenged traveler searching the world for good beer, cute animals, and new stories to tell. She has been traveling for the past two years as a budget backpacker and adventure seeker, looking for all the best this wild world has to offer. You can follow her adventures at www.whichwayswest.com