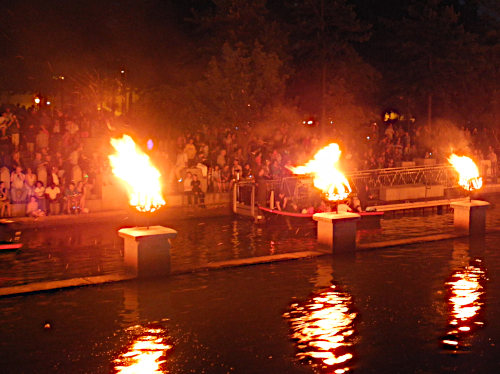 The burning braziers on the Providence River ©2021 Susmita Sengupta

The river walk was slowly filling up with people. Expectant, exuberant and excited. They lined up on the promenade and on the bridges over the river. They sat on the steps leading to the water. They sat with their legs dangling over the river. Slowly the sun set over the horizon. A hush fell over the crowd. My family and I were in Providence, Rhode Island and I was here to see Waterfire, a “one of a kind” show, or to put it correctly, a sculpture.

The Story Behind Waterfire

This was Waterfire, a public art installation that also doubles as a festival and performance. Waterfire started in 1994 as part of First Night, another event I was unfamiliar with. The first First Night festival happened in Boston on December 31st, 1975; the brainchild of Clara Wainwright, a visionary artist who has beautifully intertwined creativity and community through her initiation of many such projects. A family friendly New Year’s Eve celebration packed with arts and entertainment, First Night was designed to attract people away from alcohol laden New Year parties. Now First Night festivals take place in cities across the United States and there is even a First Night International.

And then came the First Night festival for the New Year’s Eve of 1994 when the artist and urban designer Barnaby Evans installed eleven braziers on steel tripods stretching from WaterPlace Basin to Steeple Street in WaterPlace Park in Providence. And just like that a tradition was born.

According to Evans, the sculpture Waterfire was a response to bring in positive vibes to the capital of Rhode Island as it only induced negative feelings in its residents. He realized that a large-scale aesthetic intervention was needed to kindle interest in the newly designed and renovated riverwalk called WaterPlace Park in the city.

For this visionary work embracing art, urban architecture, sculpture and music that brought in a significant mindset change about a city, Barnaby Evans received many awards and honors.

Though the initial Waterfire was held in winter, Waterfire presentations are now held from May to November and usually on Saturday evenings. I also found it interesting that the display takes place when the sunset coincides with the high tide. The spectacle extends from the WaterPlace Park and into downtown Providence. Fire filled containers are placed into the Woonasquatucket, Moshassuck and Providence, the three rivers that flow through the city. Other flaming braziers are put on piers of old bridges. In all there are eighty-six containers, each with thirty-three pieces of wood.

I waited with bated breath along with thousands of others for the fires to light up. Truth be told I was clueless about what to expect. The sun was setting and I could see the massive vats full of wood kindling gently floating on the waters. There was a palpable anticipation in the air. Gondolas with tourists went floating by. And I and everyone else waited eagerly.

It became dark. The sounds of music infused the skies. The show was ready to start. The braziers started lighting up one by one. I noticed a boat gliding by from which a person was firing up each container using a long, flame torch. The river was aglow. The buildings of Providence shone in the light. It was mesmerizing.

Not much was happening. Just the line of burning flames on the softly rippling waters, the air redolent with the mild aroma of the wood, the swirling sounds of music, the rows and rows of people, sitting, standing, walking by: the atmosphere was incandescent and beautiful.

The dazzling light from the fire brought to my attention a tall, white granite Doric style column and I was curious to find out what it was. It stood majestically across the river in Memorial Park with the red brick Providence County Courthouse behind it.

After doing some research I discovered the monument was called The World War 1 Monument. It was designed in 1929 by Paul Philippe Cret, a well-known Philadelphia architect whose famous projects include the Rodin Museum in Philadelphia and the Folger Shakespeare Library among many others. The monument pays tribute to Rhode Islanders who lost their lives in the First World War.

Representing its name, Memorial Park has two more memorials, the World War 2 Memorial and the Korean War Memorial, dedicated to citizens of Rhode Island who served in these wars.

I wished I had the energy to explore and savor the entirety of this breathtaking spectacle, to walk along the many river walks, to stroll up and down the various arched bridges over the three rivers, but that would mean a journey of many miles.

So I decided to settle down in my place as the music, sometimes a religious chant, sometimes folk, sometimes from a movie soundtrack, but in all always eclectic wafted over me. I came away from the show with a new understanding of how a gorgeous, innovative and well-designed public art project can convert and improve an urban area and bring in a renaissance. 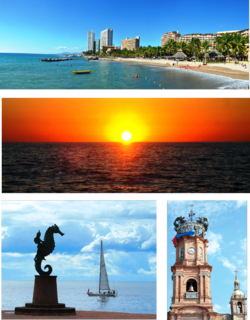 The Penguins of Simonstown, South Africa