If I timed this right, this will be my final Camera Talk for the year 2009. The Christmas and New Year Holiday seasons keep everyone pretty busy and I'm fairly certain no one wants to read a complicated camera lesson at this point in time. So, here's a simple rule to apply, sometime, during your travels. FILL THE FRAME. When you have a scene you'd like to capture but, there are some distractions (people, telephone wires, vehicles or whatever) that you'd rather not take home in your photo, just crop them out. It's called in-camera cropping. You either move in closer on the subject, or you zoom-in on the subject, until the distraction is 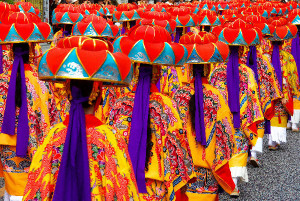 out of the picture frame. It saves you from having to crop the photo later, when you want to relax, after your vacation.

This photo was taken during a parade on the International Avenue in Naha Okinawa, Japan. I wanted to capture the brilliant colors of the traditional, formal costumes but, it was a mob scene; thousands of people lined both sides of the street. People were jumping in front of me with their cell phone cameras and point and shoots. I jumped up on a bus stop bench, folded my tripod legs (creating a monopod), zoomed-in to 85mm with an 18-250mm lens, focused and snapped the shot. After the holidays might be a better time to demonstrate some of the techniques used in cropping on your computer after a shot is taken. Have a Happy New Year and until next time, Happy Shooting!