What does it take to shoot sharp pictures in low light conditions?

Stability:
Keeping the camera steady is the number one most important thing to keep in mind when shooting in low light. Tripods are the easiest way to insure a sharp photo, but setting the camera down on a solid, level surface will work well too. Leaning your body against a wall, tree or other solid structure while holding the camera with your elbows pinned against your ribs also works well at reducing camera shake. This technique is fairly difficult to master and will probably look odd to strangers, but like anything, it will improve with practice.

When using a tripod or surface, it's best to use a cable release, remote, or the timer on your camera. This will prevent any camera shake caused by the pressing/depressing of the on camera shutter release button. 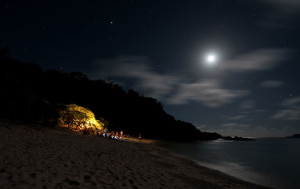 F-stop/shutter speed:
When using a camera with interchangeable lenses such as a DSLR, many will choose to use the fastest lens available to them when shooting in low light (my favorite is the Nikon 50mm f/1.4). The idea being that the lower the f-stop, the more light will hit the sensor, allowing one to use higher shutter speeds, thus preventing unwanted motion blur. This technique will however give you a very shallow depth of field, and subjects you are not directly focused on will appear blurry and out of focus. This works well when shooting handheld, but when using a prolonged exposure (as used in my shot) it's best to choose the higher f-stop to obtain the sharpest image, and deepest depth of field.

ISO:
Using a high ISO setting will make the camera sensor more sensitive to light, allowing for much brighter images without sacrifice to shutter speed. The higher ISO settings do however create more "image noise". Therefore, most people tend not to use the highest ISO settings. However if you choose to shoot in black & white, I believe the high ISO image noise can give the image an attractive film grain look. I often choose to shoot in high ISO black & white in difficult environments. Acceptable ISO:noise ratios vary between cameras. 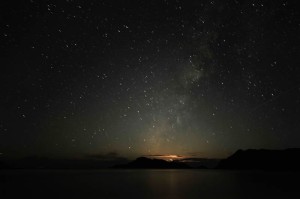 How I composed:
In this shot I wanted to use an extra long exposure (36sec in this case) to absorb enough light to really brighten up the stars, moon, and the lights from the party in the trees. The longer exposure also allowed me to use a higher f-stop, creating a crisp image. Using the rule of thirds, I composed my shot so that the horizon divided the lower third of the photo from the upper two-thirds. I also kept in mind the position of the party relative to the moon. The diagonal silhouette of the hill side also crisscrosses giving the photo some symmetry.

Compromises made:
Given the long 36sec exposure I could have used the lowest ISO settings and a much higher f-stop, obtaining an even sharper image. However I would have had to prolong my exposure time to compensate for the lost sensitivity, possibly streaking the stars too much. In the end I'm very happy with this image.

Remember that experimentation is the best teacher. Try several combinations and compare them later on. Happy shooting!

In The Know Traveler would like to welcome the talented Robert Mallon as an addition to the Camera Talk team with his first post of incredible photography. -dg- 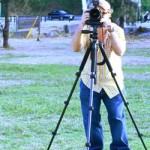 Robert is an American Expat/photographer based in Okinawa, Japan. His work has been published in The Okinawan, The AmCham Colleague, Okinawa Ocean Culture & Environment Action Network, and Japan Update publications. Capturing the island life and delivering to you.

More of Robert's work can be found at: http://robertmallon.net 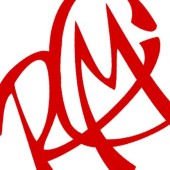 Robert is an American photographer based in Okinawa, Japan. His work has been published in The Okinawan, The AmCham Colleague, Okinawa Ocean Culture & Environment Action Network, and Japan Update publications. More of Robertâ€™s work can be found at: http://robertmallon.net.