Which place has 15 schools and several hospitals, imports plastics from all over the world for recycling, and is home to more than a million people in just over one square kilometer? That place is called Dharavi: a well-know slum that is the largest in Asia. A visit to Dharavi, however, may challenge any understanding of a slum.

Dharavi spreads over Mahim, Bandra and Sion areas in Mumbai. As home to a mass of human lives crammed into a very small space, Dharavi faces many sanitation and public health issues. However, it’s also a place that is filled with purpose and prosperity. 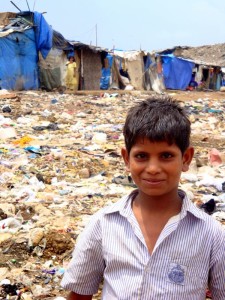 Dharavi is home to many small-scale industries. Clothing, pottery, baked goods and soap are all produced in mass quantities within the slum compound, and are sold all over the city. Leather goods and plastic cutting machines are also manufactured and exported to countries like Dubai and China. Dharavi has an annual export value of $665 million USD.

The slum tours organized by Reality Gives offer a glimpse into the lives of a million people, and the revenue generated by the tours is poured directly back into the community. Rather than being sad or scary, a walk through Dharavi is refreshing. No-one will hassle you or demand anything from you: Dharavi’s residents are far too busy focusing on their own work. More obvious even than the poverty and population that is so well-documented is the spirit and resolve of humanity.