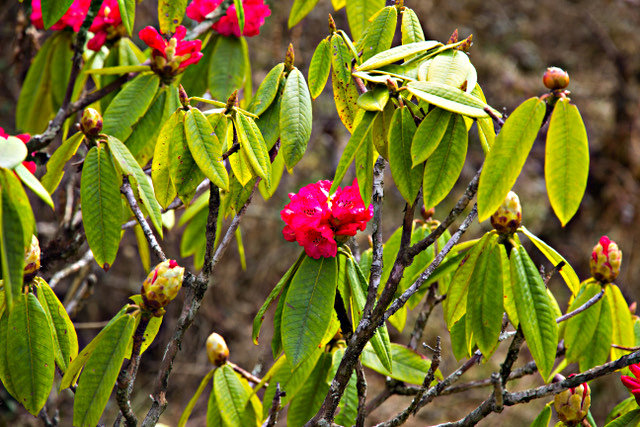 Nestled in the south-east corner of the Himalayas, the ancient kingdom of Sikkim is the northern paradise of India. Known as Indrakil, the garden of the Hindu god of war, Indra, Sikkim exudes an other-worldly peace and serenity "“ it is no coincidence that the name 'Sikkim' may be literally translated as 'happy homeland'. This tiny corridor of land, annexed to India in 1975, has exercised a powerful hold over travellers for centuries, who have been time and time again seduced by its dramatic mountainscapes and luscious fertile valleys.

However, India's northern jewel remains relatively unexploited by the country's burgeoning tourist industry. In the summer months, increasingly large groups of Bengali holidaymakers flock to Sikkim and make for Gangtok, Tsomgo Lake, and the Himalayan border with China, eager to flee Calcutta's stultifying June heat. Despite its rising popularity and improved accessibility, Sikkim has yet to attract large numbers of Western visitors and there remain countless treasures and untouched corners still to be discovered, making for an intensely rewarding and unique travelling experience.

Arriving in March, with snow still clinging to the northern region, and spring flowers emerging in the south, I fell in love with Sikkim as soon as I crossed the border. As I waited for the northern regions to open, I began to explore the Himalayan foothills, most notably, the rhododendron sanctuary at Varshey. Perched on the Nepalese border, this forest sanctuary is home to an impressive array of wildlife, including leopards, black bears and red pandas. But the real star of the show is the forest itself; this national park contains approximately 40% of the world's rhododendron population.

Passing through the gates at Hilley that marked the entrance to the sanctuary, the outside world was instantly forgotten. A paved footpath stretched ahead, meandering through moss-covered pine trees. The hush of the forest emanated an ethereal, yet pregnant calm; my friends and I instinctively spoke in whispers for fear of disturbing the magic that appeared to be suspended in the trees all around us. Climbing to the top of a small ridge and an opening in the trees, the forest stretched out in a glorious panorama, the Kanchenjunga mountain range just visible amid the distant clouds. I had reached Varshey.

As I strolled deeper into the sanctuary it dawned on me: from this point on, the entire forest was composed of rhododendron trees, some as high as oaks, towering above me. This vast expanse of green, punctuated by emerging crimson and white flowers, was truly a sight to behold. I felt like a small child wandering through a magical forest of giants. Garden of the gods indeed.

Back at the homestay, a warm welcome was provided by the local family and guides, and I sat by the fire, sipping the local home-brew whilst dinner was prepared. I learned that the rhododendrons usually bloom red and white in alternate years, save for rare occasions when the whole forest explodes in a wild cacophony of colour. My hosts were friendly, in high spirits, and certainly not afraid to tease their guests.

"The forest contains 37 different species of rhododendron", said an elderly man in the corner, draining his glass.

"You must be careful "“ 36 of those types are very poisonous. But the 37th makes very good wine".

"How can you tell which one isn't poisonous?", I asked.

A smile creased across his face and he began to cackle, showing a wide, toothy grin. "We test it on the tourists!", he cried, filling up my glass.

Helen Flatley is a British freelance writer with itchy feet, and has spent the last decade travelling all over the world, including stints in Asia, the Middle East, South America, and various corners of Europe. Helen is currently based in Paris.