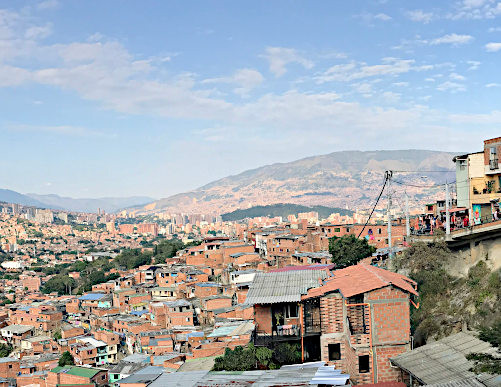 The view of Comuna 13, MedellÃ¬n, once the most dangerous neighbourhood in the world @2020 Nick Van Loy

"Don't mind the bullet holes," was the first thing our guide Stiven told me. They recently tried to kidnap Roberto, because people still think he knows where his brother buried his fortune. Which of course is easy to think, given the fact that Roberto was the accountant for the MedellÃ¬n Cartel. Making him the second most powerful man in the Cartel.

My day started with a treat from my local guide Julio, empanadas. Eating a fried dough pocket, mine was filled with chicken and bacon, is a very good way to start the day. Also, the perfect opportunity to get acquainted with Julio, who was still a bit hungover from last night. He had received some unexpected news from his family the day before, so I wasn't disappointed in his drinking at all. I was genuinely happy for him. It made him human like the rest of us and it kind of broke the ice of what was soon to be a real friendship between us. To be completely honest, he wasn't the only one either. The night before I got a little too familiar with a local rum called Ron de MedellÃ¬n.

A mural in honour of Pablo, who is still highly respected in this neighbourhood @2020 Nick Van Loy

Julio had a whole day planned out for me, all in the theme of Pablo Escobar. Prior to coming to Colombia, I was very aware that Escobar's legacy was still very present in the city of MedellÃ¬n. I wanted to know just how much was still intact of his reign over this nation.

First Julio took me to the place where once was the Monaco Building. This used to be the former home of Pablo Escobar and his family back in the '80s. The city tore it down after it was vacant for 25years after Escobar's death. They believed they could build a better future instead of trying to erase the past. So the city tries to destroy everything that Pablo ever built to prevent them from becoming tourist hotspots. That's why they built a whole memorial park dedicated to all the victims of his terror on this spot. They put a black wall up, punctured with holes and every hole represented one of Escobar's victims. I have to admit it was quite a reality check to see over 5000 holes in that wall.

We quickly got back into our car and drove up the mountain to La Catedral, the prison that Pablo built himself to elude extradition to the United States. Monks transformed the whole place to a home for the elderly, so it's impossible to enter the buildings themselves. Reminders of Escobar's residence here are still visible at some points. A few watchtowers are still standing strong but lost all their usefulness. Julio also let me in on a little secret, something other people didn't know about. Whether that was true or not is still a mystery to me, but it was interesting to see. He told me to stand a few metres in front of him, past one of the watchtowers, and then told me to pay attention to the vibrations when he jumped up and down. I was surprised to feel the ground tremble beneath my feet.

"This used to be his escape route," Julio told me. They were always wondering how he managed to escape the prison and this tunnel might have been his way out.

The road going up to La Catedral is an amazing drive, either by car or by bike. Along the way, I did see some bikers trying to get a ride from passing cars, so I do believe you need to be in good shape to get up there. On the way back to the city, Julio brought me to the peaceful Cemetario Jardines Montesacro inItagÃ¼Ã¬. Pablo lies buried in a family gravesite alongside his parents and other relatives. It's hard to imagine seeing how peaceful he lies after his reign of terror. Seeing how many people pose for a picture standing over his grave seems a harsh reality these days, where instead they should pay tribute to all of his victims.

Some of Escobar's legacy is still quite intact in the city of MedellÃ¬n. One of those places where he is still popular, even after his death, is the Barrio he built for the people. According to Julio it's not safe for me, a gringo, to be here without a guide. People here still hate gringos and so Julio had to pay some sort of 'extortion' money to let us pass. To the people here, Pablo Escobar is a hero, a self-made man who gave back to the community. Besides a giant mural of his portrait, there is also a very small museum above it. Room for just three people, where you can see photos of Escobar and some of his belongings. Given the looks I got for just walking around here, I was glad I was with Julio and not alone.

My meeting with Roberto Escobar, the brother of Pablo ©2020 Nick Van Loy

"Ready to meet Pablo Escobar's brother?" That was one question I wasn't expecting to hear. Meeting a living relative of one of Colombia's most notorious drug lords, the second in command even, was beyond my imagination. Roberto Escobar, the accountant for the MedellÃ¬n Cartel, was with Pablo when he escaped the prison, but our guide Stiven told us in advance not to ask him about that day. Either he wouldn't answer or he would get offended. It was as if he wanted to forget all about that part of his life, which is quite difficult seeing the house he was living in. It was a whole museum dedicated to Pablo Escobar. There was only one rule we had to follow: no pictures.

Outside were some of his original cars, all bulletproof. The first thing I noticed were all the bullet holes in the walls and that's when Stiven told me about the kidnap attempt on Roberto. I could tell he was very passionate about the history of Escobar and even though it was quite interesting to hear, I could never justify Escobar's actions. Stiven also told me they found one of his hidden stashes inside the house just a couple of years ago and the safe it was in was displayed in the room it was found in. Again I couldn't be sure whether or not this was true.

Stepping outside the house I could see Roberto sitting in his plastic lawn chair. Hard to imagine he was once so powerful. The man sitting in front of me was struggling to get up. He was old and tired. I had to use Stiven as a translator to speak to him because he could only speak Spanish. A language I myself couldn't speak. Next time I'll be coming to Colombia I do need to learn a few words because only a few people speak English. I could tell that people still showed him respect as if he was still the once so powerful accountant. The stories he could tell…

I do want to learn more about the history of Pablo Escobar, so I bought a book that was written by Roberto. What better way to learn the truth than from his own family, if they told the truth that is. Once I got it signed by Roberto, I met up with Julio again and he took me to a place that served bandeja paisa, a typical Colombian dish.

Eating Arepas in the Most Dangerous Neighbourhood in the World

When the eyes of an enormous painted jaguar looked me straight in the eyes, I knew I was in the concrete jungle of MedellÃ¬n, known as Comuna 13. Today it's one of the most popular places in the city of MedellÃ¬n, and I could definitely understand why. The whole comuna was filled with street musicians, art and food. I had one of the best arepas in this part. It's possible to book a graffiti tour, but I still had Julio as my guide.

Comuna 13 wasn't always like this. It was once considered the most dangerous neighbourhood in the world. Once under the reign of Pablo Escobar, the real violence started after his death when the guerillas and the paramilitary fought for control of the comuna. After hundreds of people disappeared and probably got killed, a truce was concluded. The people in Comuna 13 had it rough and one of their outlets was street art. Through graffiti, they were able to tell their story and by now even the top artists come here to paint their work on the walls of Comuna 13. Even the city made improvements, like putting up escalators so the people wouldn't have to walkup every day. Even a funicular was installed to improve tourism and it paid off, making Comuna 13 a real touristic hotspot. Another way to improve the neighbourhood and to get rid of Escobar's legacy in this part of the city.

Julio brought us to the last stop of the tour. The house where he spent the last days of his life and the rooftop where he was eventually shot dead by the police. Today the house serves as a Spanish language school and if you didn't know the history, you wouldn't have known what happened here. It's just like any other house on the block, but thanks to the Netflix show Narcos, this particular house attracts dozens of tourists a day, trying to get a glimpse of the rooftop where Pablo Escobar's legacy ended for good.

Thanks to Julio (MedellÃ¬n City Service Tours) I learned everything there is to know about the rise and fall of the notorious drug lord Pablo Escobar. I met people who stood close to him, really close even. Even though I would never justify the life of Pablo Escobar, it is important to learn the history to make sure it won't happen again.

Besides Escobar's legacy, there is so much to experience in MedellÃ¬n. It's not that dangerous city from years ago anymore. It's filled with friendly locals, cozy coffee bars and a vibrant nightlife. I stayed in the Binn Hotel in the Antioquia region. One of the safest areas to stay in and home to what Julio referred to as the most beautiful women in Colombia and I have to admit, he wasn't wrong.