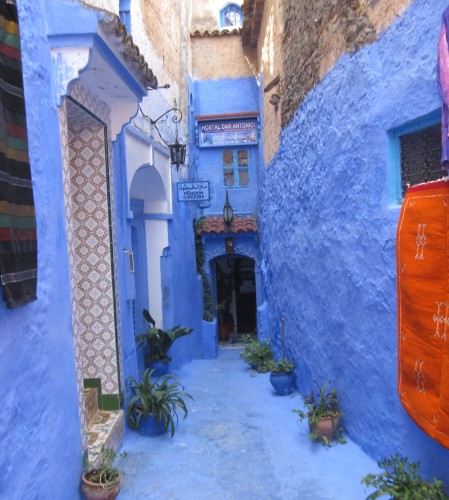 The only sound is the padding of the camel’s feet on sand. I rode under the stars out to the big red dunes to watch the sunrise near the Algerian border. A sandstorm the night before made it impossible to stay in tents as planned, but the morning was calm and clear. Later in the day, a thunderstorm cooled things down a bit. Turns out there is excellent cell phone service and Wi-Fi throughout Morocco, even out here.

I visited Morocco via Y’alla tours with a customized itinerary, driver and local guides. The trip began in Casablanca and the impressive Hassan II mosque "“ 2nd largest in the world "“ then to the current capital of Rabat, spending two nights in blue Chefchaouen. Next was the ancient Roman town of Volubilis, its mosaics surviving even the 1755 Lisbon quake that devastated much of Morocco, then the imperial cities Meknes and Fes, two former capitals.

In Fes, I had an excellent dinner at Dar Hatim, a restaurant in a private home and one of our favorite memories. After Fes, I drove to Boumalne and Ouarzarzate, where they've shot movies like Lawrence of Arabia, Babel, The Mummy, etc. We ended our trip in Marrakech, the last of the former capitals. 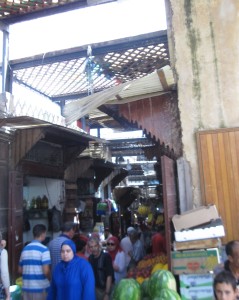 Morocco is a constitutional monarchy and the king is popular "“ they made it a point to let us know that he surfs. This dynasty has reigned since 1664, often brutally, but this king has been making reforms. I saw lots of construction throughout the country and very little of the extreme poverty of sub-Saharan Africa, though illiteracy remains a problem in the rural areas. They also told me that his grandfather, King Mohammed V, defied Hitler and refused to turn over the Moroccan Jews saying, "We have no Jews, we have Moroccans." The King prevailed.

I had a great time playing on the backlot of Atlas Studios (where they shot Lawrence of Arabia, Babel, The Mummy, etc), on a huge Egyptian set, then to Rome, then ancient Jerusalem. The set for Kingdom of Heaven was about a kilometer away, but I didn’t go out as the temp was already climbing. It was about 105-110 degrees most days. After the desert, the trip continued through the Atlas Mountains to Marrakech and stayed at a beautiful riad run by a Frenchman, Jean, who was a wonderful host (the riad in Fes was also outstanding). The main square, Djmaa El-Fnaa, heats up at night with the largest night market in the Arab world full of snake charmers, storytellers, delicious pop-up restaurants with their smoky grills, musicians, monkeys, dancers, henna painting, complete with horse-drawn carriages and motorbikes zipping right into the crowd.

My trip ended with a day in the gorgeous Imlil Valley, full of apple, cherry and walnut trees, riding donkeys up to the top to a three-course lunch in an open-air room with couches and tables and a view of the valley as well as the highest peak in the Atlas Mountains. Donkeys in the morning and a 747 in the evening. A marvelous end to my time in marvelous Morocco. 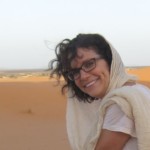 Diane Sherlock is the author of four novels, Dead Weight, Willful Ignorance, Growing Chocolate, and the upcoming Wrestling Alligators. Her writing has appeared in The Rumpus, scissors and spackle, The Citron Review, Mo+th (Bombshelter), and Bird in the Hand: Risk & Flight (Outrider). She is one of the co-founders and fiction editors for AnnotationNation.com. She received her MFA in Creative Writing from Antioch University, Los Angeles in 2009. You can find her on Facebook and Twitter @Diane_Sherlock

Pack a Little Extra in Zimbabwe