I didn’t want to know what to expect when I disembarked from the ferry onto Isla Mujeres. The only information I really needed upon my arrival to this little island in Mexico was the name of the family-owned hotel where I would be staying.Â  The rest, I had decided, I would discover bit by bit.Â

Isla Town, a village at the island’s northern end, holds most of the restaurants, shops and hotels as well as a large portion of the population.Â  It is here where I stayed and here where the island began to reveal itself to me,Â with its buildings painted in bright blues, reds, yellows and pinks.Â  As the days glided by, slow and hot, I walked the island from end to end.Â  Along the way, the rest of Isla Mujeres effortlessly began to draw a colorful picture in my memory.Â  Roads were decorated with scattered buildings painted in colors so vivid it seemed as if they expected you to you pause and look.Â  At the southern tip I found another village, also awash in bold tones.Â  Its somewhat remote location protected it from most of the tourists that hit the island, and it bustled along on its own with local daily life.Â 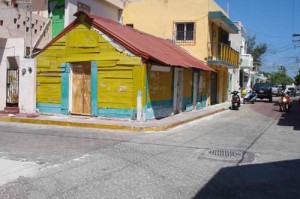 The perpetually smiling and friendly people and the backdrop of the Caribbean Sea would have left me with a happy-enough impression of this beautiful little locale.Â  But I had found that Isla Mujeres doesn’t sit back and rely on its inherent attributes.Â  Rather, it is an island not afraid to detract from its natural beauty by decorating itself in striking color.

The Walls of Dubrovnik