Karmic Cleansing Ceremony
There are many tropical isles, but what makes Bali unique is its age-old Hindu culture and spirituality. Visitors to the "Morning of the World" can participate in a Melukat, or Balinese Karma Cleansing Ceremony. This purification process, presided over by a Pemangku (Hindu priest), seeks ablution for the body and soul and is offered to guests at the private temple of the Four Seasons at Sayan, located near the famed artists' village of Ubud. 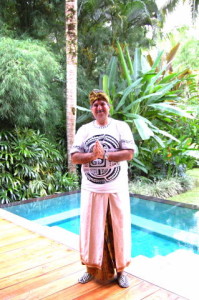 During this rite of passage I'm barefoot and garbed in a Balinese sarong, turban and white shirt. The religious shrine is located off a main road of the expansive resort of rolling hills and rivers, up a long flight of stone steps through the verdant, lush jungle. Is this the path to enlightenment?

An offering of flowers lies before the temple's brick entrance, flanked by rock statues depicting gods from the Eastern pantheon and palm fronds. A resort staffer explains that the woven leaves of the coconut tree point downwards to remind humans of the importance of being, literally, down to earth and humble. Inside of the holy place a 60-ish year old man clad in white from head to toe in a turban, Nehru jacket and sarong sits cross-legged on a plaited pandanus or palm mat in front of a table laden with fruit and flower offerings to the gods, burning incense and chanting in Balinese or Sanskrit. Black and white checkered umbrellas "“ signifying the duality of good and evil, the eternal struggle between the forces of light and darkness "“ stand near the temple's intricately carved altar, depicting floral designs, Hindu deities and barongs (magical spirits).

The mustachioed high priest rises, wearing a flower behind his right ear and grains of rice on his forehead, holding in both hands a bowl with a frangipani floating in water. My hands, feet, face and mouth are washed, as the Pemangku proceeds to chant, bang a mini-gong, sprinkle me with water from the bowl, blow incense smoke towards me and ring a brass bell. I drink some holy water; rice is placed on my forehead. The guru and I face one another, our hands clasped in prayer. 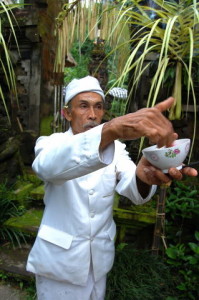 At the conclusion of this exotic ritual, the priest ties a piece of string — Benang Sidatu –around my wrist to remind me of this soul washing. During this pilgrim's progress in Bali I wear the string until it falls off of its own accord, representing the seeker's quest for balance and harmony. Literally and figuratively, the Melukat Ceremony gives visitors a taste of Bali's renowned transcendentalism.

In Somerset Maugham's The Razor's Edge after World War I, Larry Darrell becomes a spiritual seeker whose quest leads him to an Indian ashram, where the veteran attains wisdom and serenity. But upon realizing, "It's easy to be a holy man on top of a mountain," Darrell leaves the lama's lofty realm, returning to the everyday world of ordinary people. So it was in Bali, where the karmic cleansing ceremony took place at a resplendent, high security, private resort far from the madding crowd.

But visitors to the Indonesian island immediately encounter the day-to-day reality of a Third World society that views tourism as a main source of hard currency and tourists as a major revenue stream. Ngurah Rai Airport is not air-conditioned (except, tellingly, for the areas near the duty free shops), and after an almost 24 hour flight aboard Cathay Pacific that required deplaning and catching a connecting flight at Hong Kong, I had to wait about 45 minutes in the terminal's stifling heat to pass through customs — and to pay for a visa to allow me to enter Bali. 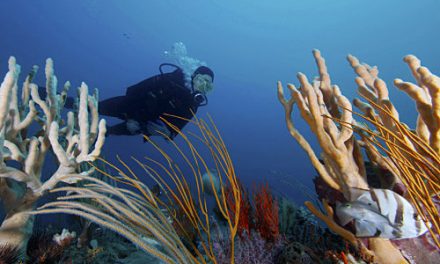