The Wild Dogs on Parade

Who Let the Wild Dogs Out?

I stand at the edge of the mighty Zambezi River about forty kilometers upstream from the majestic Victoria Falls on the Zimbabwean side of the border. The 'boutique' Matetsi game Lodge hosts me. The lodge perched as it is on a small rise overlooking this rather languid reach of the river.

I have chosen this part of the country as it is actually at the confluence of three countries, Zimbabwe, Zambia and Botswana who, by mutual consent have erected no border fences, allowing free range to the animals that use this route on their annual migration.

An hour later I am with my guide Clever (and he was indeed clever!) and our intrepid spotter Gordon making our way across a large stretch of the savannah towards a favourite watering hole. As we approach, Gordon signals from his elevated seat, which stretches a couple of meters out from the front of the vehicle, for us to stop.

From a patch of low scrub a pack of the meanest, mangiest creatures one can ever hope to encounter, looking for the entire world like a horde of mercenaries out for a night of mischief and pillage, emerges.

These are Africa's canine soldiers, the wild dogs of the plains. Gordon is like an excited child on Christmas morning, as this pack has not been sighted in the area for over two years and he tells me in a low whisper that the pack appears to have trebled in size.

The Wild Dogs of Africa

They wander past us, indifferent to our presence and head to the water, take a leisurely drink and then promptly roll about in the mud of the shallows luxuriating in the thick ooze.

At this distance these dogs are not exactly the most attractive of the canine species; their coats are a mÃ©lange of dull colours made up of mission brown, dull cream and shades of dirty yellow. It is as if they have spent the entire day rolling about in a pool of vomit.

Even though they appear to be relaxed, the senior members of the pack seem always to be on the alert, their white tipped ears roving like antennae, listening for any sound out of the ordinary.

In Hot Pursuit with the Dogs

After about twenty minutes their leader suddenly sits bolt upright, listening intently then, he stands and sets off at a brisk trot along the vehicle tracks. As one, the rest of the pack rises and follows falling into single file in total silence.

Clever starts the vehicle and we take off in hot pursuit keeping our speed to a steady 20 km per hour. African dogs have the uncanny ability to run all day without tiring, their heads rigid and straight and their long legs loping across the low grass; the entire pack in perfect unison.

Along the line there seems to be no obvious communication even though, from time to time they stop as one, sniff the air, gaze around and then take off again.

This ritual repeats about half a dozen times for the next hour when suddenly with no signal from the front, four or five wild dogs at the rear peel off from the group and head off at a 45-degree angle. This ritual is repeated over the next few minutes with two or three of the following dogs breaking off and setting off in a different direction. Eventually just the leading dog and one other is left, keeping up the same punishing pace. 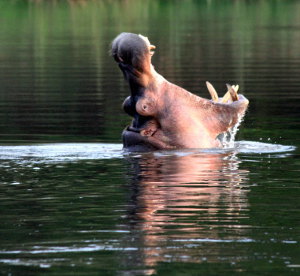 In the distance we spot a large troop of baboons under a stand of acacia trees preparing themselves for their nights rest. They seem to have no inkling what is heading their way as they sit about grooming each other while their young frolic about without a care in the world.

Not more than ten meters from the bank, a bloat of about ten hippopotami have gathered in a tight circle, their noses all facing inwards. They are, wallowing under the shade of a huge overhanging acacia tree grunting, groaning and wallowing in the shallows warding off the last of the day's heat.

The bloat as a whole studiously ignores the four or five crocodiles that 'hover' just meters away; just their eyes and nostrils show above the waterline, waiting no doubt for the opportunity to pounce on one of the small buck that will soon come down to the water to drink.

The leader of the troop suddenly alerted to danger, begins screeching shattering the stillness of the gathering dusk; he has spotted the lead wild dog.

All at once it is as if a street noisy brawl has broken out as the entire troop scatter, screaming as they head for the trees.

Out of the fading light twenty or so dogs appear at full speed from every conceivable angle having outflanked the troop who have by now formed a protective group howling and baring their vicious teeth as one.

Undeterred, the dogs merge into a marauding phalanx knowing almost telepathically which of the unfortunate creatures has been selected as they race in for the kill.

The largest of the male baboons, emboldened by the need to protect his troop, turns and rushes toward the advancing horde. Some of the younger males realizing that it would be perhaps better to fight rather than flee join their leader and rush headlong into the fray.

The dogs freeze and seem to realize that they cannot win this particular battle, stop in their tracks and retreat a few meters, regroup, and reform once again into single file and trot off almost nonchalantly.

It is however not long before they get their reward.

Employing their tried and true battle plan they descend at frightening speed on a small herd of antelope. From five or six different angles they carve a path through the terrified herd honing in on the weakest member of the herd.

The sound of death fills the silence of an African night.

A hyena, sensing the opportunity of a 'free meal' appears as if from nowhere and lopes towards the kill zone. The wild dogs will have none of it as they pause in their task; form a V formation charge forward sending the Hyena packing.

The meal resumes and the sound of crunching bones resumes until, after about ten minutes, not a scrap of the carcass exists. The pack then looks to their leader who sniffs the air, turns and takes off into the night followed in single file by his loyal 'soldiers', eager no doubt to engage in their next sortie.

In many ways I counted myself ' lucky' to have witness this effective, albeit brutal slaughter as apparently it is rare to see these soldiers of the bush performing their deadly handiwork. The African Wild Dog is everything they say it is, a merciless killing machine.

Sitting in the relative safety of the game vehicle I realize that, really Africa is not for sissies! 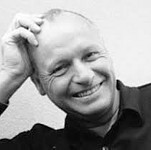 Paul V Walters is the best selling author of a number of novels. When not cocooned in sloth and procrastination in his house in Bali he sometimes rouses himself to scribble for several international travel and vox pop journals. 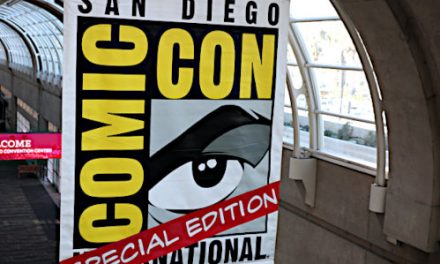