It is not for nothing that Gdansk, Poland has been labeled "Phoenix from the Ashes". The photographs that hang in the Golden Gate, the stone passageway that leads into the heart of this medieval city, show a desecrated area lying in smoldering ruins. Not only has the total destruction at the hands of the Nazi's been reversed, but the do-nothing, care-about-nothing attitude of the Communist era has faded from memory. Gdansk, as well as most of Poland, has been restored to its pre-war, pre-occupation splendor.

I walked through the Golden Gate onto Dluga Street, the main thoroughfare of Old Town Gdansk, previously known as Danzig. I gawked at The Golden House, Town Hall and numerous buildings whose owners must be vying for the "FaÃ§ade of the Century" Award. The Town Hall dates from the 1330's, and the Neptune Fountain, an elaborate bronze work completed in 1613, is the oldest secular monument in Poland. 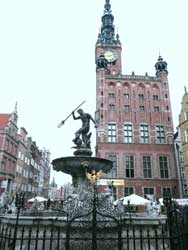 In the serendipity of travel, my visit to Gdansk coincided with a local festival, so the streets were crowded with musicians, magicians and dancers who entertained the throngs and kept the party atmosphere alive. I ambled along, taking in the sights, sounds and smells of people enjoying life. I could only imagine how different this city is now than it was during the Communist Era.

The stroll down Dluga led me to the mouth of the Vistula River. After a brief walk along its banks, I located the aptly-named "St. Mary's Walk", a charming cobblestone street that leads to St. Mary Cathedral. This massive brick sacral building, the largest in Europe, holds 15,000 devout souls. St. Mary's Walk, as well as most other pedestrian streets in Gdansk, is lined with small shops, many of which sell amber jewelry in all its forms. Here, on the banks of the Baltic Sea, this semi-precious gem, known as "the gold of the Baltic", is both plentiful and inexpensive.

Again, back on Dluga Street, I opted for a lunch of the traditional Polish specialty of piroges at the open air cafÃ©, The Hollander. The meat and potato filled dumplings tasted yummy, especially when accompanied by an icy cold local beer. Life is good.

The port "“ Nowy Port, or New Port "“ that serves Gdansk, is its own historical site. It was here, from a window in the canal-side lighthouse, that the first shot of World War II was fired at 4:45 a.m. on September 1, 1939. The port is also home to a striking sculpture, no pun intended, memorializing the dock workers' uprising led by the now-famous Lec Walensa.

I came away from my two days in Poland with a renewed respect for the power of a people to unchain themselves from oppression. The Poles have happily succeeded in celebrating their heritage with a restored Gdansk to match their restored nationalism.