For some people, Mexico signifies a land of poor people, of desperation, of dirtiness, and of corruption. For others it conjures visions of spring break fiestas or bachelor(ette) party sessions on pristine beaches in a resort town. And for yet others, Mexico is a combination of these memories. I live an hour away from the disheveled border town of Tijuana. In the four years preceding age 21, I sporadically crossed the country line to drink some of the strong water. I have also sipped on muchas cervezas with fellow gringos in Cabo San Lucas while trying to keep them from being too loud and obnoxious (as is the typical traveling American's duty, sadly enough). However, after all of these south-of-the-border times, I only met a Mexico aimed at attracting the tourists' dollar, whether it was the children in the streets selling gum or the Papa's and Beer bar chain catering to the expat clientele. Being clouded by these experiences (and my inebriation), I never had the chance to feel a connection with the Mexican people or to a real culture. For this I decided to visit Mexico City, the country's capital, teeming with over 10 million residents and no blissful beach in sight. If I couldn't find Mexico there, then I could rest this search. 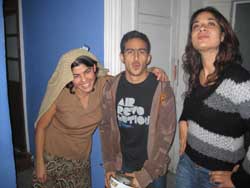 I had five days of vacation, booked the ticket to Mexico City, and the route of investigating began. With only a short window of time, I was stumped on how to get a solid hold on the city's culture. Should I visit barrios, bars, restaurants, attractions, the business section of the city, or somewhere else? How much time to spend in one area versus another? Then it hit me: www.CouchSurfing.com. This is a website linking travelers together in countries across the globe. As a member, you can host visitors or travel yourself, asking to sleep on the couch of a local wherever you happen to be going. I have hosted a few times without problems, so I decided to try the other side. After corresponding via email with a few "couchsurfers" a month before departure, a local named Talia offered accommodation at her apartment (and couch) for the entire trip. I couldn't believe it, but then again somehow I could.

Introduction to Mexico City
At 6PM on a Wednesday I arrived to the city, showed up at my virtual friend's (but in reality stranger's) apartment, and immediately we went off to meet friends at a local Lucha Libre ("free fight" directly translated) event. This is like a WWF match, but with a heavy dose of Mexican flair. Because I am very nervous carrying cash with me when I get out of airports or metro stations while wearing a huge traveler backpack, I opted to grab some pesos at an ATM just before the event. But there was no time to stop for this; the fight had already begun and the friends were waiting outside. Talia, who only knew me via our email conversations, pleasantly paid for the taxi and the entrance fees. The night's battles proved to be an amazing display of masked men flying and twisting acrobatically in and around the ring. The sounds of the arena reminded me of a Thai boxing match with its annoyingly high pitched shrieks coming from a live "band" with horns. The intensely engaged spectators constantly (i.e. without fail) screamed for their masked mascots, and boisterously booed the villains of the night. And so went the next three hours, full of energy and excitement.

As my ears still rang outside of the venue on our walk to the main street, I spotted vendors selling priceless memorabilia, Lucha Libre masks. These gems beckoned to be bought. But I knew ATMs would not be in this section of the city.

"Talia, would you mind lending me a bit more money?"
"Not a problem, here you go." 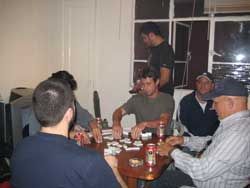 We hopped into one of her friend's cars. At this point, I didn't know where we were going, but wasn't concerned. I was sitting, comfortably content, with the night I had already seen; anything else to happen would be icing on the torta. A gas station approached and we all went inside to buy beer and snacks for the night's house party. I ran to the back of the food mart and withdrew some pesos from the ATM. Eagerly striding to the register to throw in my share of the tab I was greeted with,
"We have invited you; this is on us."

Whoa. The night continued on as I was introduced to the friends. They welcomed this Californian with friendly hugs and kisses on the cheek. The times were filled with laughter, intelligent conversations without use of much slang (so my Spanish understanding held up well), and Cuban dominoes sessions with none other than a real Cuban.

I had been in the country for less than eight hours. My comfortable accommodation had already been set up, I experienced a traditional event in a barrio of the city, a group of locals had accepted me as another friend in their group, and I was in definite debt to a local.

I felt as though I was finally getting a true glimpse of a culture. I saw my friend's Mexico in a matter of hours in its capital city. I had arrived to exactly what I searched for.

Editor’s Note: At ITKT, we always recommend having a back up plan and choosing all accommodation options with the utmost care and consideration. The vast majority of stories like these have wonderful results, but bad experiences can happen.

For part two of My Mexico