A Day in Danshui with Smelly Tofu

"What is that awful smell?" I wondered to myself as I sat on a low wall, taking a brief rest from the hectic chaos of Shilin night market situated in the heart of Taipei.

The answer was right beside me, where a young woman was sitting. No, she wasn’t the source of the pungent odour. It was coming from the food she was eating.

This was my first encounter with the smelly tofu I had heard so much about prior to coming to Taiwan. The whiffy snack, made from marinating tofu in a fermented brine, is hugely popular in many parts of Asia. However, its odour was so strong that it made my nasal lining quiver in fear. 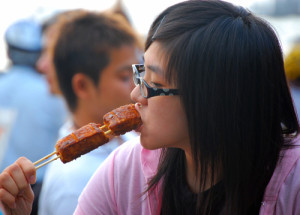 After several more days of strong smells, emanating mainly from the buzzing markets, I decided to venture to the outskirts of Taipei to escape the crowds and treat my nose to some fresh sea air. My destination was the city of Danshui, at the end of the Danshui line on Taipei’s wonderfully clean and efficient subway system.

Any thoughts of a break from the crowds quickly diminished when I saw that half of Taipei had also decided to come to Danshui. The city is a popular destination for day-trippers, drawn by the carefree atmosphere and beautiful sunsets. The boardwalk running alongside the Danshui River is the main attraction.

Upon leaving the station, I was swept along with the crowds in the direction of the boardwalk. Packed with street vendors, cafes and tourists, I’d heard that this was the best spot to see the sun sink into the water. It was also a great place to take a step back and watch the world go by. 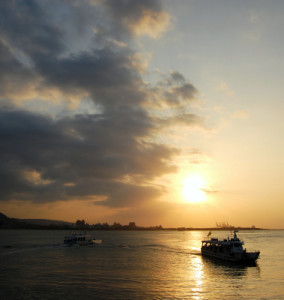 Young couples strolled hand in hand along by the river, while mothers and fathers chased their energetic children as they scampered about the wooden walkway. I saw a few people pushing dogs in prams too, the pampered pets looking rather serene as the breeze from the water ruffled their hair. And then I got a waft of something familiar.

The smelly tofu was here in abundance. There was no escaping it.

I bit the bullet and decided to try it. Following my purchase from a street vendor, I examined it cautiously at arm’s length. Skewered on a stick, it looked innocuous enough. As I put it in my mouth, I wondered if my taste buds were about to be tantalised, tortured or simply torn apart. It turned out that the taste wasn’t half as strong as the smell, a discovery that delighted both me and my taste buds. I tried to find a way of eating it without at any point breathing in through my nose, a feat which is a lot harder than it might sound. I guess smelly tofu is an acquired taste, and to be honest, I’m yet to acquire it.

I turned my attention back to the setting sun, which was now low on the horizon. The sky was a deep orange and many people were sat along the edge of the boardwalk, enjoying the scene. Once the sun had bade us farewell, the light began to fade fast and I, along with many others, made my way back to the subway station. The sea air had stirred my appetite and thoughts of what to have for dinner filled my mind. I was so hungry that I was in the mood for anything "“ except smelly tofu, of course.

Written and photography by Trevor Mogg

Featured photo is a file from the Wikimedia Commons: Shi Lin Night Market in Taipei Taiwan. Photo by: Kyle Mullaney May 2005.

The Heaven of Lamu, Kenya