Riding at midnight from the Muscat airport toward my hotel in Ruwi, one of the city's three main districts, a large white mosque I’d read about appeared on my right, just another building cutting into the desert sky. Days later when I ventured out to visit this sight, I discovered that it was worth far more than a middle of the night drive-by. This, the world’s third largest mosque, sits on grounds covering over one hundred acres. Here gardens and palm trees lead the way to a ten-acre complex of buildings which can hold 20,000 worshipers. Its size and beauty make this, the Sultan Qaboos Grand Mosque, a Muscat must-see. 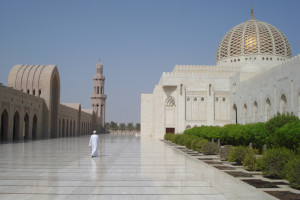 I’d become friendly with Abu Hamed, my taxi driver for most of my Muscat stay, so he decided to stick with me as I looked around. The fact that I must dress modestly to enter the mosque went without saying, but Abu Hamed was a particularly conservative person. Or, perhaps because this was the mosque at which he worships, he did not want to be embarrassed bringing in a foreign female wearing anything less than the most modest of frocks. He pointed at my flowing skirt as soon as we stepped out of his car. I looked down. It hung to my ankles. Abu Hamed was clearly dissatisfied, so I pulled it a little lower. Toe-length was going to have to be good enough, I indicated.

My taxi driver/friend began to speed walk through the gorgeous grounds toward the complex of buildings while I wavered between politely keeping up and going at my own pace to see this as I wished. To Abu Hamed, this was just another day, but I would probably never be here again. I tried to communicate to him that, believe it or not, I did not want to suit up, stretch out and take a quick jog around the place. I wanted to see every inch. We eventually compromised by him walking 25 paces ahead of me as I ambled. During the moments that our paths did collide, he would sometimes point at my head, indicating that I should tuck back into my scarf the little bits of hair poking out. Face and hands only should be visible. 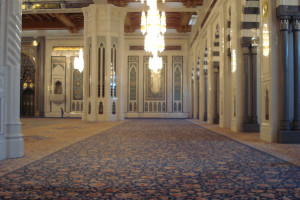 A shimmering white marble path leads to and around the complex, where Abu Hamed slowed down and walked me through the outdoor arched corridors, also made of marble, the women’s prayer hall, and finally to the main attraction – the much larger men’s prayer hall, where I froze immediately inside the door to stare at an eight-ton crystal and 24-carat gold chandelier. Photography is allowed here, but it was of little use. My point and shoot camera was not of the ilk to capture the majesty of that sparkling wonder. I tried to memorize it instead, as I do believe this was the only man-made structure that I’ve ever had to wrench my eyes away from in my life. Also impressive was the 21-ton Persian rug measuring 230-by197 square feet, on which we were not allowed to directly step. A dark blue protective mat ran over the rug on the narrow roped-off area where visitors are allowed to walk. Just before the mosque begins to fill with worshipers each day, Abu-Hamed communicated to me, the mat is lifted. 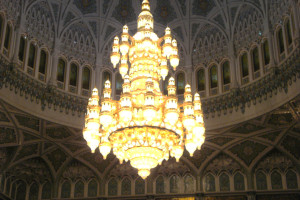 In this building ornate wooden doors, beautiful tiles, and large shining columns made of yet more white marble stand under a domed ceiling modeled after ceilings found in the 500-some forts which stand across Oman, remnants of a past filled with battles. This prayer hall can hold 5,000. Still, Abu Hamed said, frequently on Fridays, Islam’s holy day, the number of worshippers is so large that they spill out of the prayer hall, carpeting the walkways outside with their prayer rugs.

The Sultan Qaboos Grand Mosque is open to non-Muslims only for a few hours in the mornings, so my unofficial guided tour seemed little more than a quick whisk through. This was good enough, though, as most mosques of the world don't allow non-Muslims within their walls at all. 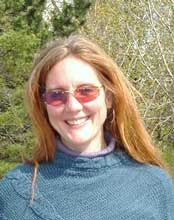 Sabina Lohr finds that home is not where the heart is, and a good chunk of her life revolves around plotting her next trip, or traveling. She has a Bachelor of Arts with a major in German which, like many liberal arts degrees, has gotten her nowhere except overseas to study. Unlike so many other travelers, she has never kept track of the number of countries she’s traveled to but knows her continent count stands at only three. The other four are calling.