In the Eye of the Beholder, part 1

It is two days later and I still don’t have all my memory back. I remember arriving at the village where the Shaman’s house was and being a bit nervous. I tried to do some research and asked people I had met and the guides how they felt about such an experience, and all I got was that it’s something I should do. I remembered Ramiro, our English speaking guide, who left me with a Spanish guide in Pantoja, say that this experience is highly spiritual and that in the three hours that it lasts I will be enlightened and soon after will be back to normal with no side effects. 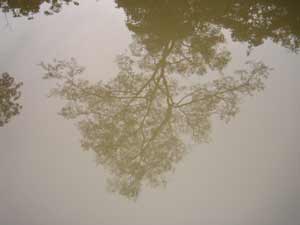 Now, here is what I recall actually happened. Like I said, I was a bit nervous, but everybody else who decided to try the “remedy” told me to stop fidgeting and be cool about it. I had dinner and headed to the Shaman’s house that, like many other indigenous structures, was propped off the ground on five feet stilts. The only way in or out was by climbing a fairly steep ladder. Carefully, as I am quite scared of tall vertical ladders, climbed in and sat on a wooden bench between Alex and Avril (my husband and a girl from New-Zealand. We watched the preparation process. The shaman took a stalk of the plant and cut it into 6-inch long chunks, carefully making sure that all pieces were the same length by using one as a yardstick. He then arranged them into five piles of six pieces. After, each piece was cut down the middle and the inside was scraped out into a bowl. It sort of looked like a green apple puree. We waited until all pieces of the stalk in the pile were scraped out and the shaman signed for the first person to come up.

Alex decided to go first. The Shaman gathered all the green puree into his hand and squeezed its juice into the glass. He then used the fibers to sponge up the remaining juice from the bowl and squeezed it into the glass as well. When the glass was half full, he asked "Que quiere ver?" "What do you want to see?" translated one of the girls. Alex looked confused; he didn’t have enough time to think of an answer. "Everything," he said finally. The Shaman whispered something into the glass, blew on it, and signed him to drink the whole thing in one go. Alex drank. I was next. I waited for my pieces of stalk to be scraped and when the Shaman asked for the next person in line. "What do you want to see?" My answer was obvious. 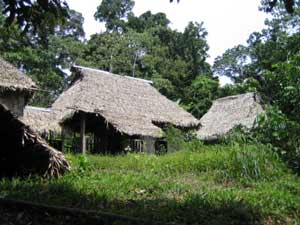 “My father please” I said, and before he had the chance to cast the spell on my drink, I stopped his hand. “Please, nothing terrible, please. Thank you.” The Shaman smiled, whispered into my glass, and I drank. It tasted like grass juice, or fresh peas right out of the pod. Next went Avril. Everybody looked curiously at each other, especially at Alex. It looked like since he was first, the “remedy” began to work.

The benches were right on the edge of the Shaman’s hut, so I asked him to lay or sit on the floor, afraid that he might fall back out of the tall cabin. He was lying on the floor next to the bench, his arms crossed on his chest. He would try to say something sometimes, but his speech was so slurry I couldn’t understand any of it. At one point I guess he tried to get more comfortable and put his hands on the floor. A second later he jerked them right back, his face either worried or frightened. “What’s wrong?” I asked. “The crocodiles,” he answered in a very clear voice. The later it got, the less I remember. I knew at one point that something was happening because everything slowed down and I got very worried about how everybody else was doing. I cuddled up to Alex on the hard dirty wooden floor and closed my eyes. I felt drunk and worried. Every couple of minutes I remember jerking myself awake, sitting up and checking if everybody else was well. It was hard to breathe, and I didn’t like it. To say the least, I felt anything but enlightened.

At one point, I believe, I asked if it’s possible to stop the experience. Maybe I asked, but no one answered, or maybe I just forgot to ask. The last thing I remember from that night is trying to stand up, and after a few unsuccessful attempts managing to do it. A single candle in the middle of the room was burning bright with a purple-orange halo. From that moment on, I drew a blank.

Part two of In The Eye of the Beholder 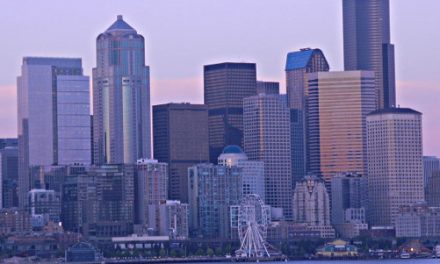