A Peak in Provence, France V

Editor's Note: This is one installment of a seven-week series from an ITKT featured writer.

I have an awful confession.Â  I’m ready to kill the ducks.Â  Every night there’s some canard catastrophe outside my window where they all quack incessantly like car alarms.Â  I have no idea what’s happening and don’t begrudge their avian drama, but does it have to be at 3:00 a.m.?

This morning I go to the town marche or farmer’s market, a weekly event.Â  I wander around and am starting to feel frustrated I can’t communicate better.Â  I touch a pretty dress and the vendor, a heavy man with a shaved head hurries over.Â  “Ah madam….he says, followed by many words I don’t understand.Â  As someone who likes to talk, it's hard to shake my head and sheepishly shrug my shoulders, “Je parle un peu francais.” But this vendor’s not easily deterred.Â  “Unique!” he says in a heavy accent about the dress I hold.Â  “How you say?Â  Sexy?”Â  Despite his exuberance, the garment isn’t for me and we part company.

I happen upon Jean Pierre a jewelry seller who looks like a goth biker with black clothes and rings on each finger.Â  He hears my accent and talks to me in broken English.Â  I learn he used to snort cocaine but was saved by Jesus.Â  “Every day I fight the devil,” he says with a shrug, “but I win.” He was in the US once in the eighties on the west coast and starts singing, “Wish they all could be….”Â  I of course chime in…”California girls.”Â  We crack up.Â  The vendor next door looks over and smiles.Â  For some reason, I want the French to like me, to see Americans are fun and approachable.

Still, as nice as all this is, my mind starts drifting home.Â  My oldest son broke up with his girlfriend the other day and sounded morose on the phone.Â  My youngest is frustrated he can’t find a job.Â  Randy’s doing his best, but I can tell not used to the relentlessness of running a home.Â  And in a selfish way I’m glad I’m missed and needed.

I try to push away thoughts of leaving in two days but it’s hard.Â  I don’t look forward to the long, lonely flight home but in some ways it’s fitting.Â  Collobrieres is far, not only in miles but history and culture.Â  I had to walk through the looking glass to get here.Â  I move along the streets and feel the hundreds of generations that have lived before.Â  They’re in the stone walls, the heavy doors, the faces.Â  They’re in the baskets women bring to market, the baguettes at every meal.Â  They’re in the wine, the scent of lavender and the lively cafes.Â  The French culture is old and beautiful and I’ll miss it.

That night I dine at the Hotel Notre Dame. Â The first course is a fanciful layering of tomato, zucchini, and mozzarella topped with the best shrimp I’ve ever had. The garnish is a big sprig of basil.Â  The whole effect is charming and whimsical like something in a Dr. Seuss book.Â  Food is life to these people.Â  They hate wasting anything and buy whatever’s fresh that day, another habit I want to take home.

Back in my room, later that night, I hear owners Olivier and Nili talking to guests on the patio and find myself eavesdropping.Â  As I can hear, Nili is passionate about art, education, and the need for self-expression.Â  In her voice tinged with French, Farsi, and German she talks about her childhood and how she came to Collobrieres.Â  Funny, you can meet someone in passing and not realize their hidden depths and interesting stories.

And speaking of self-expression, I’ve decided to do something about the 3:00 a.m. duck patrol.Â  It's simple, but brilliant.Â  I close my windows, turn on the a/c and sleep like a baby. 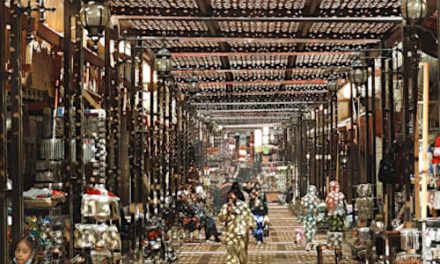 Vancouver’s Bard on the Beach Festival

The Andromeda Botanical Gardens of Barbados