Warning: count(): Parameter must be an array or an object that implements Countable in /home/customer/www/intheknowtraveler.com/public_html/wp-content/plugins/text-link-ads/textlinkads.php on line 861
 Keep Austin Texas Weird - In the Know Traveler 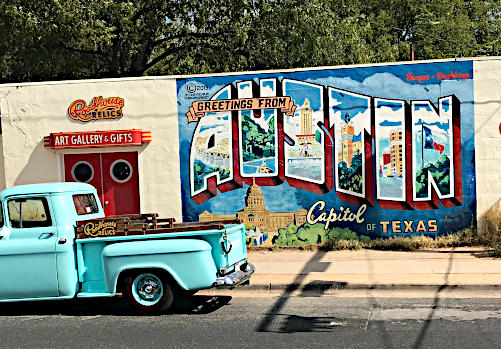 A view of the Austin Skyline @2020 Nick Van Loy

It was hot, way too hot, and I just came back from a whiskey distillery. Civilization was floating by through our window, while Eddie Vedder’s Society was playing in the background. The thermostat read 100°, but inside the A/C was on full power. The interstate was owned by big, corporate eighteen-wheelers. Against my red Mustang, it wouldn’t even be a fair battle. The only, but little competition, were the dozens of pick-up trucks. After all, Texas is the state of pick-up trucks and rednecks.

Giant billboards on the side of the road were the only remainder of society. The sign above us read: ‘No trucks left lane’, so at least I had a little advantage. The speed limit was 75Mph, but our speed was at a comfortable 80Mph.

Austin, winner of the best city to live in, is known as the Live Music Capital of the World. Just like Nashville and New Orleans, this city breathes music. On different locations located throughout the city, you can enjoy excellent live music, going from local bands to international stars.

On my first night there, I was already confronted with the enormous police force of the city. I was a witness to someone getting arrested for something minor, by a colony of patrol cars.

South Austin is known for street art all over this part of the city. Of course, there are several other places with art on the walls, but the most iconic ones, like the ‘Willie for president’ and ‘Greetings from Austin’ are located in South Austin. A little further from the Greetings sign is a chalk wall with the writing ‘Before I die…, where you can contribute to art by writing the things you want to accomplish in your lifetime. I brought my inner child back to life and took the biggest piece of chalk I could find and wrote my goal on there. To see what I wrote, you’ll have to go down there.

I’m a big fan of art, so of course, I wanted to explore more of the art scene down in Austin. One of those places to do so is the Blanton Museum of Art. In here I could find different kinds of modern art as well as art from Latin-America. Just like several pieces of modern art, I was left with one question: What makes something art? Some of these art pieces could have easily been made by children as far as we know. Definitely worth a visit, even if it’s just to soak up the atmosphere of the university.

Another museum that was worth visiting was the Museum of the Weird. This museum houses an unusual collection of mummies, mermaids, mutants and monsters. If you’re into these kinds of things just like me, this museum is quite interesting. Even though it’s not always clear whether something is real or not, but that’s part of the experience. My personal favourite was the shrunken heads, something I’ve always been interested in after reading a Goosebumps novel. At the end of my visit, I was being treated with a live show. They make sure this show is always different, just to keep things fresh. During my live show, a woman was dancing on broken glass just to punch nails through her nose at the end. One of the lucky few visitors was chosen to pull that nail back out, just to prove her act was real. I was rather glad she didn’t pick me for that.

I absolutely love everything there is about literature, so other people who love literature as well, make sure to go to the Harry Ransom Center. Here I could see several literary masterpieces like first editions and handwritten letters from authors like Jane Austin, James Joyce, Faulkner, etc. I was lucky there was a free guided tour that had just started and they allowed me to join. It’s possible to go around on your own, but I would definitely advise taking a guide. They are all volunteers who love literature, so they tell stories with absolute passion.

Everything is Bigger in TX, Including BBQ

Texas is known for its exquisite BBQ and it’s been said that Austin serves the best beef brisket and ribs. A perfect place to satisfy my tasting buds was Salt Lick BBQ. The pulled pork sandwich there was almost brought to perfection. As soon as I entered the building, I could see the enormous ‘pit’ where my meat was being cooked, Texan style. BBQ here is considered a lunch thing. Since it can take up to 15 hours to cook, most BBQ spots can only cook enough meat to last through lunch. A real Texan would probably encourage you to abandon your knife and fork and use your hands instead. Some places don’t even offer cutlery, but those are usually the really old-school BBQ spots. But by having a beard, most BBQ’s will end up dirty anyway so just go down and dirty and use your hands, no one will give you a weird look.

A few other places to recover for a while are:

For the bearded men among us, a visit to The Bearded Bastard is a must. As soon as I walked through their shop, I was welcomed as if I was one of their best friends. I was lucky to speak to the Bastard himself, one of the most talented people in his line of work. He guided me through the whole process of creating his products. Absolutely worth visiting, even if it’s just for a friendly chat with the owners.

There are several other cities nearby if you want to escape Austin for a little while, like San Antonio or Waco. Both are easy to travel to from Austin.

I decided to visit both of them. I started with San Antonio and since I rented myself a car, I was able to drive along all the missions, to finally end up at the Alamo, which is right downtown. The Alamo is probably the most famous outpost of them all. Who used to control the Alamo, was controlling Texas at that time.

I'm also a huge fan of everything that has to do with dinosaurs. I found out that there was a museum downtown called the Witte Museum, that has an immense collection of fossils and dinosaurs. Besides the dinosaurs they also have more art to discover. One of the new artists I came upon was JosÃ© Benitez Sanchez, who is known for his impressive yarn paintings.

I ended my visit to San Antonio with a slumber along the Riverwalk, which goes along different restaurants and little shops. Close by is La Villita, the oldest part of the city, home of several artists and their shops. A perfect place to get that little painting for your bedroom wall.

Like I mentioned earlier, I also went to visit Waco, which is known for the mass shooting between a cult (Branch Davidians) and the FBI. But I learned about that after I arrived there. The main reason I wanted to visit this town was the Dr. Pepper museum and the Waco Mammoth National Monument. In the latter, I was able to witness the excavation site of several skeletons of Colombian Mammoths. One important note though, this place is only accessible with a tour guide.

After checking out Tripadvisor for other things to do in Waco, I stumbled upon a whiskey distillery named Balcones, which was actually close to the Dr. Pepper museum. I have been an admirer of this amber-like liquid gold for as long as I can remember, so I was very glad to explore their tasting tour, in which I could taste up to six of their whiskies. Maybe it wasn’t a good idea to drive there myself, but luckily I had brought my brother with me who could act as a designated driver. Balcones is a relatively young brand that started in 2008, but they have achieved a considerable amount of awards in that short period of time.

I closed off my visit to Austin by paying a visit to South Congress Bridge, home to a million and a half bats. You heard me, 1.500.000 million! I had no idea around what time they would fly out, so I spent around two hours at this bridge, only to find out the bats had already migrated to Mexico. So if you’re driving all the way there just to see the bats, make sure you inform yourself about their migration.

But I came here to see bats! No matter what, I wanted to see more than ten bats, so that’s when someone told me to go to Round Rock. At the parking lot of Napa Auto Parts, a dozen people gather here every night to see thousands of bats that come flying underneath the overpass. I didn’t have any luck at South Congress, but here in Round Rock I definitely had more luck.

The Must-See
Museums of Bentonville