A Potpourri on Mumbai’s Trains

In the stations that stretch on and on, stray dogs touch their noses to commuters’ hands, hoping for some food or love. Rats like small wolves cross the garbage goldmine in the tracks, fearless. Crows fly out of the way of barreling trains, just in time. 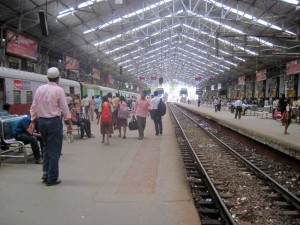 More than 7 million people ride Mumbai’s commuter train every day, which runs from north to south in the linear city. Hoards of sari-clad, dhoti-clad and suit-clad people step down onto the tracks instead of using the overhead walkways, and jump onto moving trains in a scramble to get inside. At peak hours, the doorways of each car are packed to capacity: thousands of people travel by train without being in the train at all. They hold onto poles and allow their entire bodies to sway in the wind, flying past tall buildings, huts covered in graffiti and open fields with long grass.

Inside the crowded compartments, there are people of every age, caste and creed. Teen girls gossip loudly, hands fluttering. Babies sleep on their moms’ shoulders, making wet spots with their open mouths. Men sleep, leaning against the barred windows, or play cards.

Salespeople make their way through the cars with baskets of almost anything balanced on their heads. With raw voices, they call out their sales pitch in Hindi, which translates literally to: "Cell phone cover will come, rickshaw farecard will come, small big comb will come, everything will come cheap and good." Women rifle through baskets of earrings and fondle sweet red plums, asking to taste. Blind singers, acrobat children and all types of beggars also make the rounds, travelling by train for a living.

Before a train has even slowed to a halt in the next station, people spill out of the car doors like sand in an hourglass, filtering up the stairs and out in the most organized chaos imaginable. One can see almost anything and everything on Mumbai’s trains. 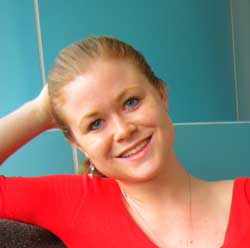 Best of the Best: Sushi in Vancouver