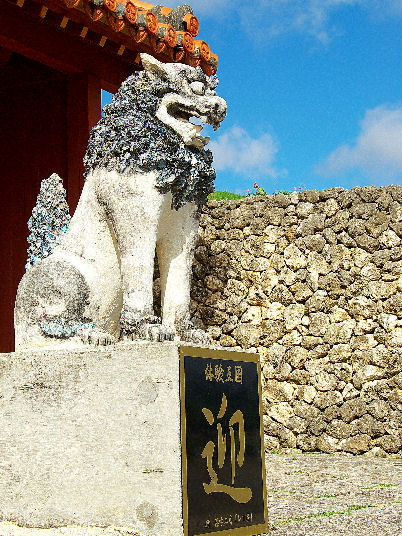 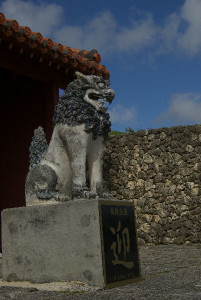 Today, I'm posting two photos in order to give a quick demonstration on the difference between two file formats used by photographers. It used to be pretty much only professional photographers or really serious hobbyists would bother using RAW when taking pictures. But, nowadays, lots of people are getting into the act. Until recently RAW files weren't available in Point and Shoot models, only in your larger DSLR cameras. That's changed and an alert reader pointed it out to me just a few weeks ago. Canon is now manufacturing a Point and Shoot which can make RAW photos. You can bet on it; next year everyone will follow suit.

The dark photo of an Okinawan Shisa (Lion-dog) posing under a red-tile roof with blue skies is an example of what a RAW photo looks like. It looks dark, way underexposed, almost like one of those old-fashioned film negatives from the 20th Century. And, so it is; it's raw and needs to be developed. 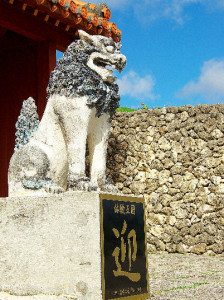 The photo in which the Shisa is clearly visible is a JPG file. You can Google to find out more about the different types of files most commonly used with digital cameras today, but my quick explanation may help you decide which format is best for you. JPG files, when copied, loose some of their details each time you copy them. If you're just shooting for your own personal use or scrapbooking, JPG files are the way to go. RAW files allow you more flexibility in creating JPG files. From a RAW file, you can create 100's of JPG's, every one different from the one before it. The trade-off being, you have to develop every shot after you download your camera. If you'd have shot JPG's, the camera would've developed them for you. In a nutshell: RAW lets you be a bit more creative, artistic, flexible in what you do after the camera is downloaded, but makes more work for you and creates the need for more storage of files. JPG's are just fine for most travelers, not getting into commercial production with their photography. Until next time, Happy Shooting!