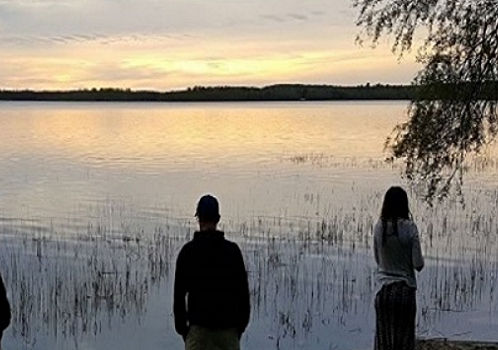 My father saw gnomes as he neared death. They started with their backs against the paneled walls of his living room, moving closer and closer to him each day. He wasn't scared though. Rather, he appeared to be comforted by them. After Dad died, a hospice grief counselor told me that it isn't rare for people to observe things"”humans, hounds, hobbits all the same"”shortly before they are to breathe their last. Not only do the figures circle in, but they also take the shape of something familiar, lightening to the dying while they prepare for departure. I smiled upon hearing this. Pop was a Tolkien fan, so it was fitting that trolls ushered him into the next life. I got goosebumps to boot.

Several years pass until I get such shivers again. It's late in the evening in the middle of May. Nine students from Carroll University, their professor, and I are hunkered on the edge of the White Earth Powwow Grounds in northwestern Minnesota. Dressed in layers and huddled beneath blankets, we strain our eyes to decipher the shadowy shapes in front of us. The trajectories of our visible breaths lead us to dim flashlight beams. We trace the rays back to tiny clusters of silhouettes seated amongst the metallic bleachers of the sanctified arena. A light fog has crept in from the adjacent forest to join in attendance. An almost full moon softly glows over a faint white structure at the bullseye of the revered ring. The construction has the form of a circular shower curtain, and the ends of branches are jutting out of the top. Suddenly, a handful of men sitting next to the tent beat their drums and belt out loudly. The singing eventually tapers off, and the reverberations echo into the distance.

Every so often, a drummer leaves the center to escort individuals from one of the patient groups back to the tent. Those who are taken to the tent kneel before a small gap at the bottom. The kneelers articulate their names, where they are from, and present a cloth that identifies their tribe. They then ask for advice concerning a specific problem (e.g., health) with which they are struggling. The tent shakes in response to each petition, sometimes quite vigorously. When the quavering stops, counsel is contributed from inside the tent. Requests carry on through the night. We watch until the cold air ultimately grows unbearable.

The following morning our Anishinaabe (uh-nish-ih-nah-bay) guide, a well-respected local sage, fields the various questions we have about the ceremony. He reveals that the tent shakes upon contact with the spirits. The higher beings, in turn, yield the helpful information which is sought. Although he cannot clarify what exactly happens inside, he asserts that the advice imparted the previous night did not come from a person.

Two days after the shaking tent, the Carroll crew and I return to the hallowed site with dozens of cedar seedlings. The Anishinaabe have long cherished cedar. Moreover, they utilize it to protect rarified locations and timberlands. Given that a forest provides the backdrop to the White Earth Powwow Grounds, it is understandable that our team has been asked to add more cedar trees to this numinous neck of the woods.

We spend the duration of that dewy dawn planting all over the area. We visit other establishments important to the community, such as the White Earth Reservation Tribal DOVE (Down on Violence Everyday) women's shelter, Indian Health Clinic, White Earth Senior Apartments, and the White Earth Tribal Headquarters. We root the remainder of our three hundred seedlings at a K-12 institute. We are invited inside for a midday snack.

A dynamic voice abruptly bursts through the double doors a few minutes later. The cacophony of convo, chuckles, and clanging silverware no longer occupies the lunchroom. Returning our PB and J and tiny milk cartons to their respective slots on our plastic trays, we give our undivided attention to a middle-aged fellow sporting a ponytail. He strides to a long table, putting one of his feet atop its bench. He rests his forearms on his bent knee. He leans in.

The speaker has a captivating presence. Even though he addresses the entire squad, he locks eyes with everyone, making it seem like he's communicating with us individually. The man goes on to thank us for all the hard work we've done to find homes for the baby conifers around Circle of Life Academy. The principal is principally contented with our efforts because cedar on the White Earth Reservation has become scarce. He further explains that cedar is sacred, sacred locally due to its ceremonial, religious, and medicinal purposes. As a small token of his appreciation, he subsequently lays out the steps for how to draw on the trees we've been planting for a common ailment. He concludes his expression of gratitude by affirming that, albeit intangible, his gift"”a bestowal of knowledge"”is one which can last forever, especially since it can be passed down to others.

Not only do the Anishinaabe continue to heed the wisdom of their ancestors, generations upon generations have also used drums in their ceremonies. During our final evening on White Earth, the Carroll group and I are invited to a drum ceremony. We are simply encouraged to bring food and to dress respectfully. When receiving this offer, my mind immediately skips to booming beats"”thunderous rolls coming from Native drummers who erupt into song. Yet no tunes can be heard while we pull up to the peaceful pond. And drums are not struck under the roof of the small lakeside cabin either. Instead, we strike a buffet.

Donating our big pot of taco soup to a large spread of chili, hot dogs, chicken, and bologna sandwiches, we soon discover that the intention of this gathering was not about percussion, but recognition. The homeowner states that he is holding this ceremonial dinner to honor his powwow drum, which is proudly displayed behind him in the dining room. He earnestly speaks of his connectedness to the instrument, referring to a kindred soul, a loyal companion instead of solely an object to produce music. He, his brother, and a couple of women from the community openly answer our inquiries about this custom and other Anishinaabe traditions. They also disclose deep stories about themselves. Similarly, they ask questions to get to know our crew better. The sincerity they've displayed makes us comfortable in delivering from the heart too. Honesty is fully shown. Ardent accounts are shared. Even some tears are shed. We convey our indebtedness to our newfound friends for inviting us to such a personal, powerful event. The owner says we are always welcome in his home.

In the handshake line leading to the door, we repeatedly tell our hosts that we don't want to leave the Reservation. We take some last pictures together on the shore behind the house prior to hitting the road. The scenery is postcardlike. Laconism lulls the lakefront. Time stands still. The fading sun, shoreline evergreens, and glassy water are the perfect background to a mesmerizing experience on White Earth.

Part of me remains at my dad's bedside, hearing him matter-of-factly describe the gnomes nearby. I can still see the tent shaking on those twilit powwow grounds. I continue to feel the true weight of the cedar in my hands. And I keep striving to drum up moments as senseful as those in that place on reflective pond.

Without a doubt, I find these occasions to be incredibly humbling and meaningful. Humbling in that I was allowed into such profound windows. Meaningful due to their authenticity"”unique occurrences viewed in their purest form.

My pop once remarked that "all things are beautiful when honestly displayed." I can honestly say that beauty is on full display on White Earth.

– For more information on how to join an Xperitas Community Partnership Program visit their website here.

– It is a four-hour van ride northwest to the White Earth Reservation from the Minneapolis-St. Paul International Airport (MSP). It is highly recommended to stop by the Mille Lacs Indian Museum and Trading Post on the journey from the Twin Cities for an orientation to Native history and culture.

– Itasca State Park, birthplace of the Mississippi River headwaters, is about an hour commute from White Earth.

Tyrel Nelson has been leading volunteer trips since 2007. He enjoys
traveling the globe with his wife, Alyssa, playing guitar, hot yoga,
cold-weather 5ks, and slow-pitch softball. He teaches Spanish and
continues to write in his native Minnesota.

The Odd Town of Oatman, Arizona:
A Route 66 Adventure