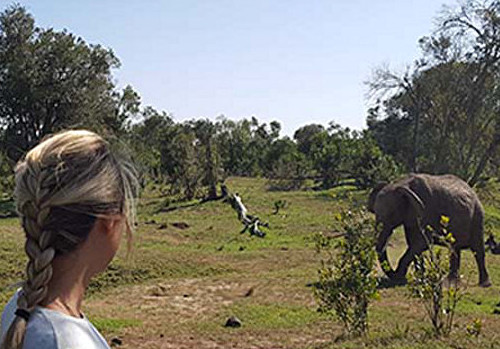 They appeared as shadows through the trees, one at first, then a second and a third, until the whole herd was illuminated by the glow of the full moon above. I scarcely dared to breathe for fear of alerting them to our presence. It was not the first time I had seen elephants on our safari in Ol Pejeta Conservancy, but standing only meters away with nothing but the crackling fire for safety was both terrifying and mesmerizing in equal measure. Their footsteps were silent as they grazed on the bushes beside my tent. Whether they could see me or not I will never know, but as I watched them glide towards the riverbank in the moonlight I couldn't help feeling that they had come to say a final goodbye.

On the banks of the Ewaso Nyiro River, set against the backdrop of Kenya's tallest mountain, it is a wonder that Ol Pejeta safari park isn't better known. Renowned for its pioneering conservancy efforts, this is truly a safari park with a difference. It was an absolute highlight and perhaps even one of my top ten travel experiences ever. It is certainly a weekend I will never forget.

Ol Pejeta safari park was my last stop on a two-week road trip around Kenya. I love a good safari, but I have to be honest, my expectations weren't high. Having previously visited the Serengeti I was pretty sure I had already seen the best and was afraid that Ol Pejeta would pale in comparison. What I found was something incomparable, a unique experience that will stay with me for a lifetime.

Getting the camp fire ready for night time ©2020 Emily Nancolas

Ol Pejeta is a safari park just a few hours' drive from Nairobi. It is possible to spot all of 'the big five' here, along with countless other animals and a huge variety of birdlife. Another huge draw to this seemingly undiscovered gem of a safari park is how comparatively empty it is. In a time when it is all too common to be sharing lions with a queue of other jeeps, Ol Pejeta is quite literally a breath of fresh air. There were only a handful of times that I even saw other jeeps the whole time I was there and only once when I was sharing an animal sighting with someone else.

I chose a self-drive safari and camped out in one of their designated camping spots in the heart of the park itself. The camping plots are basic, private and unprotected. I shared my beautiful little area next to the river with lions, leopards, monkeys and elephants-though thankfully I only saw the latter two nearby! I have never felt more intrepid, exposed and vulnerable, especially while lying in my tent at night and listening to the lion's roars and the rustling bushes outside.

I came prepared, with my own tent, cooking equipment and food. Luckily, I had learned from previous experience to leave all the food locked away safely in the car. As soon as my back was turned, the car was surrounded by monkeys on the lookout for open windows or doors-their gateway to a three-course meal!

Days at Ol Pejeta were spent on the hunt for lions, rhinos, elephants and buffalo, all of which I spotted while I was there. Finding these incredible creatures for myself was challenging, and I certainly didn't see as much as I would have on a paid safari drive, but the feeling of being all alone with these animals when I did find them was second to none. There was no waiting in a line of jeeps for my turn to get a quick photo. I was like an explorer in my own little corner of Africa.

Nights here were spent cooking over an open fire while watching the sunset over the river, and shining a torch around to watch for the reflection of animal eyes as they drank. Leaving the fireside to use the (very basic) toilet was a pretty scary experience, as I could never be sure of what sat waiting in the surrounding bushes. I was forbidden to leave my tent once the fire had gone out, which wasn't a hard rule to obey once I had heard the sounds of the lions hunting.

The Heart Of Ol Pejeta

Ol Pejeta Conservancy has put animal welfare and conservation at the heart of every decision made. The visitors here help to fund pioneering research and a strict animal protection programme.

The conservancy has added 'wildlife corridors' to ensure migratory animals can move safely in and out of Ol Pejeta to access greater ecosystems while ensuring the rhinos here are safely enclosed in the large protected area. Their ecological monitoring unit closely observes and studies the behaviours of the elephant herds and other animals that live here to better understand how to protect them. Their research has helped to inform local villages and farms about the behaviour patterns of endangered animals, and they have managed to work together to protect some of Africa's most endangered species.

The Last of Their Kind

The real draw to this safari park is the work it is doing to save endangered rhinos. Heartbreakingly, Ol Pejeta safari is the only place in the world where you can see the last two existing Northern white rhinos. After the devastating death of Sudan, the last male, they are kept under armed guard protection. Due to excellent security and proper ecological monitoring, the population of black rhinos here has increased from 20 in 1993, to 113 in 2017.

For this reason, it is quite possible to spot rhinos here, and I saw them on many occasions. Most of the time, they were grazing quietly in the open, grassy areas of the park. Being close up to these rhinos was quite magical, and it was hard to imagine how anyone could do them harm. One of the best animal encounters I was lucky enough to witness was the stand-off between a rhino and a pride of lions. While watching the young cubs play in the bushes I noticed the mother on high alert. Soon after, a rhino came trundling out of the bushes, pawing his foot and holding his ground. The rhino won this time, and the lions sulked away into the undergrowth.

I stumbled across the rhino graveyard by accident. While a rhino grazed peacefully in the distance, I read the stories of far too many tragic rhino deaths, most from poaching and some described in graphic detail. It was a heart-breaking moment, but an important one. I left with a new understanding of the atrocities that the conservancy is trying to fight, and more compassion than ever for these gentle and fascinating endangered animals.

I am not sure I could ever have another safari experience that would compare to my time spent at Ol Pejeta. From watching elephants graze past my tent in the moonlight, to seeing giraffes walk majestically across grassland, framed by the snow-covered peak of Mount Kenya, this place truly stole my heart "“ and I'm pretty sure it will do the same for you!

The Ol Pejeta Conservatory website is very informative, and the perfect place to start when planning a trip here. Booking accommodation (camping sites or lodges) in advance is highly recommended, as although Ol Pejeta is quiet compared to other safari parks, there is limited space to stay. Various activities, such as volunteering behind the scenes, bush walks or cycling safaris, can also be booked through the website, and there is a wealth of information here on the conservation work they carry out 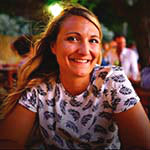 Emily is a keen traveler, adventure seeker and scrabble fanatic. In an attempt to follow her dreams of learning to sail she quit her full time job as a primary school teacher just over a year ago, bought a sailboat in Sicily called Hot Chocolate, and now explores the world from her tiny home on the ocean. She writes travel guides and blogs about her experiences at sea and documents her adventures through film. You can find out more at twogetlost.com