In the know Caymanians party, if at all possible, on Thursday or Friday, so they can chill out and recover the next day in Rum Point. With the exception of Sunday or when more than one cruise ship is in port, Rum Point is still the best place I have ever been to to disperse that nagging headache which comes from just one too many of the island’s delicious (and dangerous) drinks. If, like me, you have a friend who is a Realtor by day and a salsa instructor by night, I’m sure you understand what I’m talking about. 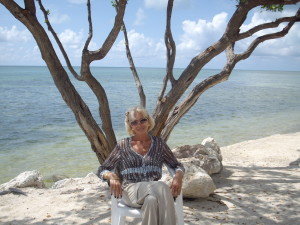 Rum Point is located on the northern shore of Grand Cayman. You can either drive across the island or, even better, take a 40 minute ferry ride from the Hyatt Regency Canal on the opposite side of Seven Miles Beach. Rumor has it, that Rum Point got its name from the times of rum smuggling, when barrels of the stuff got washed ashore if one of the boats suffered a mishap. Anyway, the place has absolutely everything one associates with the Caribbean: fine white sand, shallow deep blue water, water sports of every kind, hammocks to lounge in, benches to sit on, sun loungers, great food, great drink, friendly servers..do I have to say more?

It suffered greatly during hurricane Ivan but has since been restored. Don’t miss the Wreck Bar, recently refurbished for one of my favorite foods: Blackened Mahi Mahi or Blackened chicken. Drink a mudslide or two, swing in a hammock, swim in the water, walk along the beach and at the end of the day, you are ready to party all over again! The only time the relatively small place gets crowded is on Sundays when everybody and their dog heads to this island’s very own piece of paradise. But, who can blame them?

On the Road to Delphi