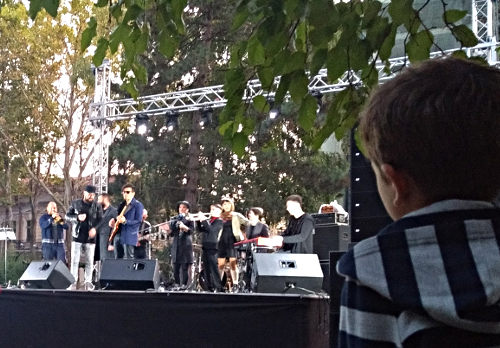 Personable and fascinating at any time of year, the little-explored European capital Chisinau really outdoes itself in late September to mid-October. Kicking off with the Moldova Fashion Expo (2019 dates were 26-29 September) and Chisinau Marathon (29 September), it’s soon time for the year’s biggest events "“ the Wine Festival (5-6 October) and Chisinau City Day (14 October). Added to this, it's still the season for staging weekend concerts in the city’s parks.

Incredibly, all events are free and – despite Moldova’s small size and status as the poorest and least visited country in Europe – they’re professional, big-deal affairs. This isn’t the best thing about them however. What that is, is indefinable; these events leave me so elated and full of idealism that the former Soviet nation quickly becomes my favourite travel destination.

It all began when I was fortunate enough to chance upon a concert one Saturday afternoon at Chisinau’s main park on Boulevard Stefan cel Mare. Sitting down to teens dancing in traditional costume, I certainly hadn’t expected to still be there three hours later! Clapping madly for a popular band fusing traditional folk with rock. They and the popular singer preceding them are amazing – not just performance-wise but in how they mentor all the child acts, playing instruments and singing duets with them. Everyone’s personalities really shine through, to the extent that by the end I almost feel I know them.

As if that doesn’t make me emotional enough, during the band’s final songs, a homeless-looking guy runs up to the stage and begins busting out the dance moves. He then disappears as quickly as he appears, only to reappear clutching half a dozen roses which he throws on stage, as is the Russian tradition to express appreciation for a show. My eyes well up – I still get sentimental about it now. Without knowing it, that guy made such an impression on me. 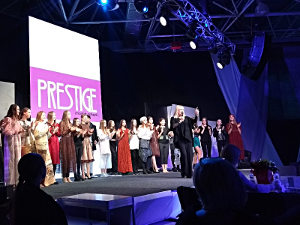 The instant I see the mauve-lit runway signposted with “Fashion Week Moldova” and the UN AIDS logo, I’m excited; I know this is the cause supported by “Fashion Weeks” internationally and I’m aware of the significant discrimination still surrounding HIV in Moldova.

The large pavilion is beginning to fill up, so I find myself a seat. Suddenly, deep house music erupts from the speakers and two hosts appear. Hearing the word “competition”, I glean that the fashionably-dressed people seated around the runway are judges. They’re introduced: some are from Moldova; others have come as far afield as Romania, Ukraine, Belarus, and St Petersburg. The show is conducted in Russian, punctuated by an English-speaking Claudia Schiffer makeup advertisement and terms such as “avant garde”, “street-wear” and “black and white”.

Designs are as interesting and creative as they are classic and beautiful. One collection of coats is covered in the most phenomenal painted landscapes. For the entire 2.5 hours I’m captivated – not least by the closing presentation of what I only then learn is the “Young Fashion Designer Awards.” The coming together of designers, models, backstage crew and the extremely charismatic hosts immediately reminds me of the concert: there’s the same electric atmosphere and spirit of cooperation. Nowhere is this better demonstrated than when makeup artists, hair stylists and photographers are, like models, sent down the catwalk to rousing applause.

I feel I could be in any of the world’s fashion capitals – only this has a much stronger sense of community. Extending all the way out to the entrance, where several stallholders sell (of all things) locally-produced honey! Likewise, while designer clothing fills one pavilion, the other showcases “everyday” Moldovan fashion brands, handmade jewelry and giftware.

The venue, “Moldexpo,” isn’t typical either: an international exhibition centre situated alongside a picturesque lake and recreation area and a massive Marx, Engels and Lenin statue (relocated from Parliament when Moldova gained independence in 1991).

11:30pm the night before the marathon I do something I never imagined myself doing – I register for a fun run. Well it cost nothing, was only 1.5 km, and you got a free t-shirt, so you start to see my motivation! Another is imagining the Chisinau International Marathon Committee reporting far away Australia as among the nations that participated.

Arriving at the starting line, I assume the flags I see represent the fifty countries from where participants come. Spotting two people underneath the Australian flag, I go over and ask if they’re Australian, and succeed in confusing two Moldovans!

The run is indeed fun. Everyone really gets into it, and I experience the euphoria of running with a group through streets lined with cheering crowds, all the while laughing in disbelief at what I’m doing. Nothing has ever got me to challenge myself like travel has! It’s as if my mind decides, “Well I’m already outside my comfort zone, so why not just keep going?”

No doubt the appeal also lies in the “everyday” taking on a novelty value when experienced in another country. It becomes a cultural experience in itself.

After the run, I walk downtown to watch the marathon. Then, following the competitors back to the starting line, I check out the numerous sport and food stalls. I’m surprised to find a children’s book shop. Is this a deliberate attempt to promote reading or simply further evidence of the prominence reading retains in the ex-Soviet Union and neighboring Romania? (Travelling the region I couldn’t get over the number of bookshops and libraries, nor the statues and national days honoring writers).

Moving onto the next stall, I find the greatest souvenir: a Chisinau Marathon fridge magnet with the slogan “Run like you’ve stolen something.” Ha!

Other surprises are a blood donation bank and an American Christian organisation tackling the significant problems in Moldova of human trafficking and child poverty. Here I meet an American couple volunteering in Chisinau. He makes promotional videos for charities and connects people working in different charities to one another. She teaches students business skills. They invite me to lunch at a traditional Moldovan restaurant, which we don’t leave until evening.

I begin the day at the Nativity Cathedral where crowds have gathered to witness the traditional ringing of church bells, signifying the founding of Chisinau. A well-known Soviet-era song follows, performed by an opera singer and orchestra.

Entertainment and stalls fill the main street, positioned according to which of Chisinau’s five districts they represent. So, under one large banner you have “Botanica” district exhibiting its industries and specialty shops. Under another, “Centru” district. Then “Buiucani” district, “Riscani” district and “Ciocana” district. It’s all here "“ baked goods, honey, arts and crafts, traditional and modern incarnations of folk costumes, decorative metalwork, pottery, and jewelry.

Scattered among the district stalls are Moldovan fashion brands, a traditional cottage, universities promoting their courses, a gym, and military tanks for the kids to climb on while their parents experience the exhilaration of holding an AK-47.

The diverse range of activities, professional setup and large crowd make the most significant event on Moldova’ calendar seem bigger than similar events I’ve been to in more populous, wealthier cities. Coincidentally as I’m coming to this conclusion, I bump into the Americans from the Marathon. They agree and hope it makes Moldovans as optimistic about the nation’s future as it does them.

City Day becomes night, with a huge concert kicking off at 6pm at the Great National Assembly Square. I’m excited to recognize some of the performers from the park concert! I gather they’re Moldovan personalities since they also feature in pre-recorded interviews outside prominent Chisinau landmarks, screened between performances.

It’s a treat to witness how seamlessly this country combines traditional folk music acts with current and classic pop, indie, and operatic acts – sung in Moldavian, Russian (the official minority language), English or a combination of all three. Meanwhile the stage’s LED screen shows a 1981 Soviet cartoon, and what is obviously a well-known video of a girl “coming of age” and marrying during the Soviet-era. No wonder these concerts attract everyone from teenagers to the elderly!

Also taking place at the Great National Assembly Square, the annual two-day wine festival attracts thousands of foreign tourists, who are welcomed at the airport with a free bottle of wine and a phone card.

A temperate climate saw Moldova become the major supplier of wine to the Soviet Union and home to what is still today the world’s largest wine cellar. Sixty eight wineries are represented at the festival, offering wine tasting, master-classes on wine tasting, and winery tours. There’s also grape-inspired skin care, traditional cuisine, handicrafts, master-classes on folk-arts and dancing, and no shortage of places to relax – with benches ingeniously crafted out of wine crates, and tables from wine barrels.

Suddenly the stage comes alive, as a chorus of traditionally-dressed seniors begins to sing, play accordion, and dance the “hora.” To my astonishment, the audience follows suit, young and old joining hands to circle round and round. Somehow the elderly keep pace with the beat of traditional folk music that’s so fast you’d swear it was electronic dance. For this reason, I can’t help but get into it too.

The lasting impact that every one of these events has on me continues to astound me. While travelers regularly dismiss Chisinau for its lack of tourist sites and the inaccurate perception that Eastern Europeans are unfriendly, I got to experience humanity at its finest and culture at its most authentic. What more could you want from travel?

Down the Death Road