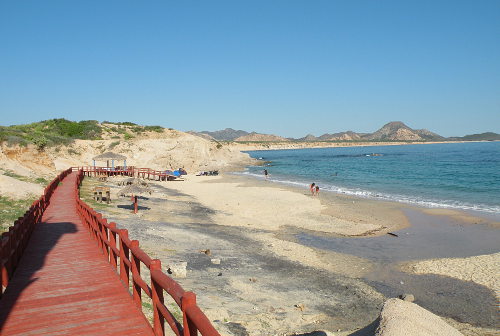 Over the Baja Sur Divide

Leaving my vacation home at Casa Oasis Todos Santos and the tropics after 4 days, I drive north and in about an hour reach the crest of my loop. Here the road intersects the Trans-Peninsular highway (BCS-1). A southern turn is taken and the four-lane highway abruptly changes into dual lanes. Looking back, this is probably my first encounter with the Baja of yesteryear.

My path quickly climbs through a profusion of yellow and green flowering bushes and into the mountainous divide. At its crest is El Triunfo, a town that boomed in the late 19th century with silver mining money. I take the opportunity to examine my map while stopped in front of an old church decorated with fresh paint, its bell towers glinting in the morning sunshine.

According to the map the descent to the Mar de Cortez passes through an arroyo that at its mouth stretches for three-quarters of a mile. Even in the scorching late summer sunshine it holds liquid evidence of the tropical downpours filling it weeks ago.

Upon reaching the broad coastal plain near the bottom a decision time arrives — my inquiries with locals about road conditions of the dirt track into Cabo Pulmo National Park from the north cause me to rethink my plan.

Not Off-the-Grid Quite Yet 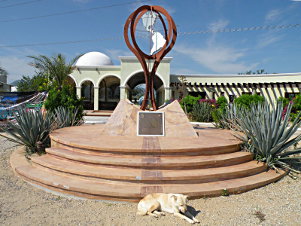 This route change brings the instant revelation of connecting with the soul of Baja’s past. Although the clock isn’t totally reversed here, I do discover places that have failed to tap into the economic fortune that Los Cabos has found.

Traveling down the now narrow coastal lowland with the mile-high Sierra de la Laguna looming nearby, a monument marking the Tropic of Cancer appears. Stopping, I park near a dog sprawled lazily half-in/half-out of the tropics. I wonder if she knows the significance? Maybe it’s just an intuitive feeling that animals share, sensing the magnetic fields of the environment.

However, being less sensitive I know only because a plaque tells me so. The explanation reads this is where an imaginary cartographic line encircling the globe contacts Baja Sur, marking the most northerly point on Earth where the sun passes directly overhead on its wobbling yearly path.

To the Mar de Cortez 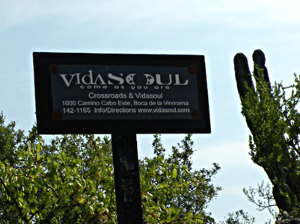 Quickly, my new route returns me to the northern outskirts of San Jose del Cabo.

My destination, on the Sea of Cortez, is Hotel VidaSoul. They maintain a nice page of directions on their website and these can be used for 99.9% of the route. Unfortunately these are wrong at the beginning – just as the road changes to dirt the signs marking the route washed away in the recent storm (Summer 2017).

Here’s a tip from my experience — continue south on BCS-1 beyond the turnoff for the airport about a mile to the first traffic light, signed ‘A Santa Catarina’ (see the map for details). After a left turn, follow the road as it changes directions several times and becomes dirt before crossing a large arroyo. From here tag along on new ‘paths’ behind the smaller trucks into a village — this is Santa Caterina. Take a left on the main paved road, which after a mile exits town and becomes dirt again. After several more miles a direction sign appears and I follow it’s instructions to reach Palo Escopeta.

From this point on VidaSoul’s printed directions and signs remind me I’m on the right path. 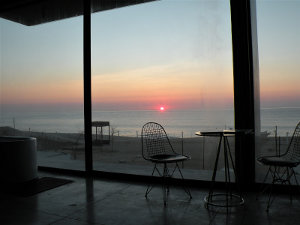 Completing this leg of the journey I pause at this unique hotel. Built by East Coast sun-bird immigrants, the modern architectural style and gleaming white paint really stand apart from this desolate coastal setting.

I’m told it began many years ago as a simple palapa selling beer and tacos to surfers and adventurous travelers. Today the attached restaurant continues to sell beer and tacos, but their menu is much more extensive now.

It’s also evolved into a hotel boasting 16 rooms, two of which feature remarkable floor-to-ceiling walls of windows. These provide the perfect portal, giving me a cloud-free sunrise view over the Mar de Cortez. 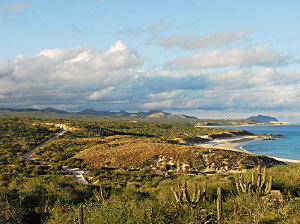 Following a relaxing evening spent talking with travelers and watching satellite TV in the bar, the next day I set in motion my plan to tackle the dirt road north to Cabo Pulmo National Park.

Although this road is challenging in spots and a modicum of off-road experience is needed, for the most part it is a good to decent dirt track. Except in one spot — in early November 2017 a significant water hazard existed just north of Los Frailes that flooded the road for a quarter mile with a foot of standing water. It turns out this is the intelligence I received earlier from locals that caused me to alter my route plan. 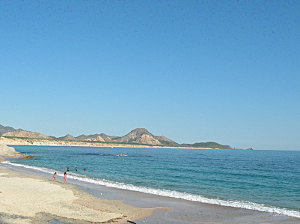 I sat here a moment and pondered my next move. True, I had watched as a local got through this without problems. But what if I’m not so lucky and I need to wade out to a local ranchito for assistance? After all, the Auto Club of America isn’t a phone call away for towing. I soon work up courage and follow another local through.

After my success, a little bit beyond this waterlogged section I find probably the premier beach along this coast, Los Arbolitos. It attracts many to rough it with tent camping and primitive toilets and showers. This is the Baja I remember best with it’s long, empty, desolate stretches of undeveloped coastal wildness.

The Ghosts of Baja Past

It was in the final half of my trip I found that Baja of generations past. The highway shrunk into two lanes, became less maintained, and visions of the frontera’s glory days lined the road.

But it was on the beaches of Cabo Pulmo National Park where I saw my quest fulfilled, where I re-discovered the wild and remote ghosts of Baja’s past.

These first locations represent the dreams of boom times, fueled by wealth from ore and oil. Today the wealth is in tourism, and it fuels what could be a more sustainable specter.

But I guess I have to wonder — will history repeat and through tourism, not silver, give all of Baja Sur an economic lift?

Read the beginning of my journey in Part 1

Steve Smith inherited the wanderlust and has always needed to see what’s around the next corner. In his college years he enjoyed many memorable (and cheap) forays into Mexico sleeping under the stars, but today that’s all changed. Since 2006 he’s contributed stories and photographs to In The Know Traveler, and in 2014 he assumed an editor role with the same. Published both in digital and print formats, his international assignments have taken him to the Middle East, Asia, North/Latin/South America, Europe, and the Caribbean. Follow his Facebook page Steve’s Roadtrippin’ Travels that spotlights both his photography and how global road travels intersect with digital storytelling using dynamic space-age mapping technology.

For more ITKT travel stories about the Central America

Last Rave at the Bucket of Blood, pt. 3

In Nature in the California Sierras (video podcast)