I saw a hilarious comedy at the Hawaii Theatre last night. Defending the Caveman is a Broadway show starring Isaac Lamb, who has been performing the comedy for 5 years. He has great mastery for the timing of the show and really owns the stage. The show explores the differences between men and women in some ways that I've never heard before. It is endearing, interesting, and most of all, laugh-out-loud-nudge-your-partner-in-the-arm-funny.

Seeing a Broadway show might not be on the top of your "must see" list when visiting Hawaii, but for those of us who love a great show, the chance to see a show with such clever writing and skillful delivery while on vacation is not to be missed!

The Hawaii Theatre is a vintage building that is very ornate inside. If you are familiar with the theaters in Los Angeles, CA, think of a theater like the Orpheum Theater, but the size of the Mark Taper. It is an intimate space with the feeling of a theater that has a long and rich history. Great shows come to the Hawaii Theatre- both local and Polynesian themed shows as well as national hits like STOMP! and now, Defending the Caveman.

Defending the Caveman is a one-man show (which I'll sometimes shy away from because some one-person shows can feel like a long, self-important monologue), but the actor really played off the audience and was not self-important at all. The show really felt like a conversation instead of a monologue. I would say that the play is most appropriate for couples. There is only a bit of racy language, but the show is all about adult men and women relationships, so it is not appropriate for children.

Last night (Tuesday the 31st of March) was opening night. The crowd was mostly made up of long-time theater patrons. Isaac Lamb had the audience in hysterics and received 3 rounds of applause at the end of the show. Defending the Caveman only plays in Honolulu through Sunday so if you are here now, buy tickets! I highly recommend this play. If you have a chance to go, go!

Below is the website for more info and tickets etc. for Defending the Caveman in Honolulu:
http://www.hawaiitheatre.com/event_calendar.html 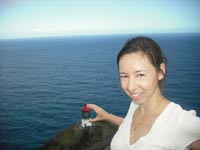 Staying Put, or Moving on

Dancing with the Stars