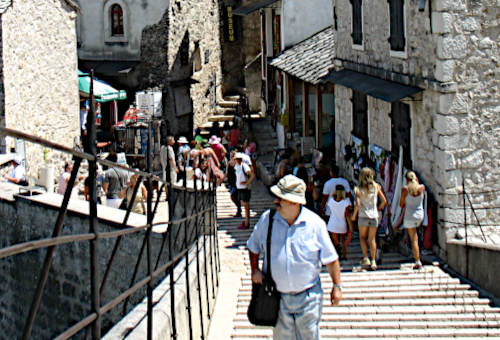 The summer sun shone brilliantly over the Mostar Bridge as tourists clambered to its peak. Daredevil young men dove from the high point of the bridge into the Neretva River, egged on by audience applause. This bridge, linking the Muslim and Orthodox sides of town, has been lauded as a symbol of unity in formerly war-torn Bosnia and Herzegovina. However, what is visible at the surface may not entirely reveal the truth. 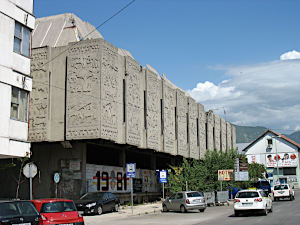 This attractive building near where I stayed was labeled condemned, too dangerous to enter @2021 Brooke Yool

I visited the town of Mostar in Bosnia and Herzegovina in the summer of 2015, enticed by its Ottoman charm and architecture. I was also intrigued when several travel writers had described the town as a symbol of reunification after the bloody breakup of Yugoslavia in the 1990’s. As someone who was a college student during the Balkan War, I was eager to learn more about how this part of the world stayed peaceful. We rented an apartment for a few days on the Muslim side, taking a few days to explore.

Not many regions in the Balkans were spared in the battles of the 1990’s. In fact, the original iconic bridge of Mostar was destroyed in 1993 during a 24-hour battle. About ten years later, a replacement bridge was built, both to memorialize the original bridge, and to serve as transportation.

I saw that the area immediately around the bridge was indeed tourist-friendly and charming. It was flooded with tourists, but there was a positive energy. There were several restaurants overlooking the river, as well as many stalls selling crafts leading right up to the base of the bridge. The climb to the peak of the bridge, open to pedestrians only, was steeper than it appeared, but it rewarded itself with lush views down the Neretva River valley. The sun glinting off of the river, as it flowed toward the Adriatic, was a beautiful sight.

The Mostar Bridge joins the two sides of the city, offering views of a gorgeous river valley @2021 Brooke Yool

When I returned to the area around our rented apartment, however, the mood was different. While the buildings near the bridge were nicely maintained, there were several that were just a few miles out that were decrepit. In fact, a building right across from our apartment had signs clearly posted in local languages as well as English, telling people not to enter for fear of death. These buildings looked modern on the outside, but upon closer view, they were clearly on the verge of collapse. I had assumed that these buildings were destroyed by shells or shrapnel in the war, and they were not worth rebuilding, since we were at least 2 miles away from the tourist center. Most tourists would not make it out this far.

Moreover, there seemed to be an unspoken division between the sides of town. The Muslim call to prayer, which must occur at specific times of day based on the position of the sun, was drowned out by church bells coming from the other side of the river, a chime which had no specific time designation. Further, our host told us that there were bus and train stations on both sides of the river – one set for the Muslims, and one set for the Orthodox population. These observations hardly made it feel like the town should be upheld as a model of peace!

That said, Mostar was a beautiful stop for a few days. It is beautifully positioned in a lush river valley, dotted with quaint buildings and mosques that you can see for miles. Nighttime pictures of the bridge are stunning, when the bridge is uplit. The locals, while they may not always appear to agree with each other, are very friendly to tourists.

And, it’s experiences like this that remind me that it’s important to explore away from the tourist center of town. If you take the time to go just outside what’s in your tour book, you’ll not only meet some interesting local folks, but you will get a truer sense of the real city.

For more ITKT travel stories about Bosnia and Herzegovina