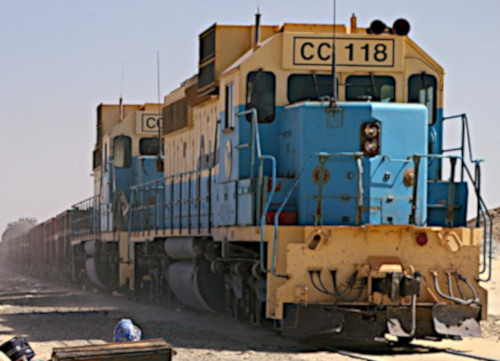 A blazing blue sky that is so far above you can see into the universe’s soul. Not a cloud for miles.

I’m standing at the window of a small white cement hut with a bakery sign painted on its side, it stands alone alongside my dusty road, in the middle of a wide-open scrub desert, the only such building for miles and miles. A gentle wind blows the heat across my face as I stand, arm stretched in front of me with my hand on a loaf of bread, staring up into the sun’s glare. Opposite me, inside the bakery leaning out of the hatch with his hand on the other side of the loaf of bread stands the baker, also starring up. We’re both looking for the bird, the only bird for a billion miles that just took a giant shit, probably about 5 minutes earlier, from a height of “to high to see the bird, but we know it’s laughing at us because it’s shit has landed smack bang in the middle of the loaf”. What are the odds of that?

The problem was, seconds before I had just paid for the bread, which happened to be the bakers last. Along with tinned sardines, it was to be my lunch, and now as I tried to push the soiled bread back to the baker, and he tried to deliver the loaf to me, we found ourselves locked in a surprising conundrum. Consumer rights, and google reviews don’t count for much in Mauritania, a country of desert, mosques, ocean and the world’s longest train. I mean, what would you do? Piss off the baker, or just eat around the bird shit. Pondering my options, looking around to see if the baker might have friends lurking nearby, then remembering the invisible bird above, I decided to do my best to wipe the white gooey splat on my trousers and hope the tinned sardines were delicious enough to balance the now rather alkaline looking meal.

Mauritania is a country I had never heard of before I arrived there. It was a country in the way of a road that took me from Morocco’s western Saharan state through to Senegal, The Gambia and beyond. Amongst other things Mauritania is home to the longest train in the world, a Goliath chain of massive heavy bread tins on wheels, lined up for miles on a single track that pokes up through the sand.

Iron ore is mined far away in the middle of the Sahara, transported by the train to Nouadhibou port which then returns back into the desert empty. I had heard that locals would jump into the trains empty iron ore carriages, hitching a free ride into the desert. My plan was to join them for the first part of the journey, hopping out close to Atar, where I hoped my limited Arabic would enable me to ask someone to give me a ride into town. More about that later.

Wanting not to be seen alighting the train, I threw my bag into one of the bread tins and stealthily followed it over the dusty sides, worrying that someone may ask me to get out. I need not have worried, inside a couple of locals sat huddled in a corner, both acknowledge my blonde hair, and stared. My bag sat in the middle of the carriage, I picked it up and went to the other end of the carriage, sliding my bum to the floor, we all sat and stared.

The train had started some time before I felt it move. Like a line of dominoes the carriages thudded into each other one by one and labored forward with an echoing clunk before joining the crawling pace of the engine. Immediately the leftover Iron ore dust started to swirl, like flour in a cake mixer, it puffed, turning the air black, as my travel companions lifted scarves over their faces.

This was going to be a nightmare. The dust swirled unapologetically, darkening the light. I tried everything, holding my breath obviously not a great long-term solution, turning my back to the wind didn’t work, and the iron ore dust just seemed to be in this vortex, whirling around and round, not emptying as I wished it would, back into the desert. At one point I decided to jump into the carriage behind, pulling myself up the sides of my wagon, looking down into the one behind, I was greeted by a black smiling face half covered in ski goggles and a towel, that guy had obviously travelled this route before.

I was stuck, by now my face was buried in my ruck sack, looking desperately for something to help me out. My travel companions had walked over to watch, annoying, and then one of them bent down, pulling a thread on his thaub, he ripped the bottom 10 inches off, and passed it to me pointing at my face. Without any words being passed, just a nod, there was an incredible feeling of camaraderie of friendship, above all, I was very thankful.

The train entered the desert without fanfare, clunking from townships and suburbs to brush and then sand, passing camels, and sand dunes. As the train track gently curved the length of the train became more impressive, the engine must have been a mile away, so far away that my journey was silent save the gentle wind and occasional clatter of metal on metal.

Sunset, red fire dropped below the horizon and the days heat turned to a chill which turned quickly to cold. The sky filled with a thousand stars, and the bright moon’s reflections lit the now stealth looking train, gently edging forward. It was us, our wagon, the train, a track and nothing else. Beneath my mask, I smiled, and breathed, and smiled some more. Silent, unhindered by a destination, this was a journey like no other.

There is no station in the desert, the train just stops, car headlights shine onto a few carriages towards the front of the train about half a mile away, and my travel companions point to me and nod, “Atar” they say. My bag goes first, I wave to them as I climb down out of the carriage, and run full pace towards the headlights. At this point, I have no idea where I am, what I’m running towards, if this is Atar, or who anyone is, it’s very dark, and no one speaks English. Some might say that’s not smart; I might agree.

Atar! Atar!! In the darkness there is shouting, and pushing, the bustle around the Jeep is intense. Goats are being strapped to the sides of the 4 wheel drive in sacks, chickens loaded into baskets, panicked squawking, and people are piling into the open backs. Drivers and companions four a breast squeeze into the Jeep’s cabs. My best guess is that as I climbed on and found my space that about 15 other souls sat piled on top of each other with me. I asked how long, I was ignored. I asked again, only the goat replied, over the chatter and noise of revving engines I heard a confused “baaa”.

There was no road, just sand and tracks, the frigid air blasting past I took some heat from the squeeze and ducked my head into my chin. It felt like I was flying, the sand kicking up a dust behind the convoy of vehicles. All lined up gliding deeper into the dark night of the desert. 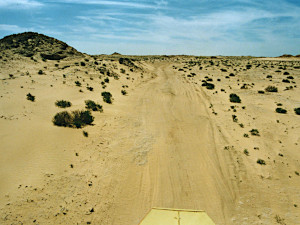 The desert track to Atar ©2011 John and Tara Newby

It had now been a full day and night since I had first stepped onto the train and I had been in the back of the Jeep for about 6 hours. My legs numb, my eyes heavy, and my body aching and cold there seemed to be no end in sight. Other Jeep’s in the caravan through the night had veered off, leaving just two Jeep’s, mine and one just ahead. I looked to the east as the sun started to rise, waiting for its warmth to hit, wanting this journey to end soon as the Jeep’s pulled to a halt. The road continuing through the dunes. This was the first time I had seen the guns. Shit, I thought. Even if my legs would let me run, where would I go?

The sand dunes were impressive, long shadows darkened the ridged hollows as the peaks glowed in the golden early morning light. A gentle wind scattering grains from one peak to the next, silently moving them across the desert. There was no Atar in sight, and my travel companions quietly and slowly untangled themselves from each other, grabbing lost flip flops, and pulling on tunic tails to free them. Desperately I asked one person after the next what was happening, why were we stopping. No one was disappearing behind sand dunes, so I guessed it wasn’t a toilet stop, the guns were making me nervous.

As is always the way when answers are lost to the last place you look for them, it was the moment before panic that rugs started to be rolled onto the sand, all facing towards the sun, towards Mecca. The guns leaned against the Jeep and the gentle murmur of Allah Akbar as everyone, but me, kneeled washing their dusty faces with hands dry for the desert night.

It was emotional, let’s leave it at that. A journey that was one of the very best, an adventure that started a full day ago. I had been looked after, cared for and helped along a road little traveled by outsiders. I wanted to pray with them, to say thank you, I needed to give thanks, but instead I watched on grateful for another day to explore. This was what travel meant to me, and whether I had merely gotten away with it, or calculated my adventure correctly, Atar would provide me later that day with a mattress and some more tuna and this time sandy bread minus the alkaline toppings.

John travelled through Mauritania in 2004. He writes:

Back then there was no real road to speak of from the Western Sahara (Morocco) to Mauritania. It was instead a sandy track passing a lonely baker’s hut lost in the Harmattan, that weaved its way through a minefield. Evidenced quite literally by the exploded cars just yards away. I understand there is now a passenger carriage on the train, so breathing iron ore dust is no longer a prerequisite for this adventure. The journey from the train to Atar is now understood to be paved, and takes considerably less time to navigate. Always worth checking your countries travel advice before heading out on this adventure.

Public Bathing and Communing with the Stars in Japan