There is something to be said about hands-on exploring. I find information easier to follow when there is a visual or display of the explanation. The Mid-America Science Museum contains over 100 hands-on exhibits. These exhibits help to produce curiosity about science education by exploring life's elements. The engaging museum can be found tucked away west of downtown Hot Springs, Arkansas.

As I stood on the front property of the museum, I was taken back by the building nestled in the fall foliage. It was surrounded by massive trees standing tall on 21 wooded acres practically luring me in from the array of colors. Upon entering, I could see there were several galleries ready to be discovered. In the Tinkering Studio, children and adults can make a take-home project. I made a flying contraption from a straw and two strips of paper. While the project itself took no time at all, I tossed my guilder in the air several times to find out how to keep it in the air as long as possible. My simple engineering turned into fun entertainment for myself and the other visitors watching. Once I decided I had enough amusement, I took a seat at the Animation Theater.

The short, animated film I viewed was about a tiny girl trying to escape from the danger spreading around her. The plaque by the screen read: "Dot (2010, 2 mins) Sumo Science. The inch-high Dot traverses a landscapes of pocket-sized objects and full-sized surprises in the stop-motion animation." The short film is in the Guinness Book of World Records as "the world's smallest stop motion character animation." Towards the end of the short, the camera zooms out, way out, to show just how small the set really was. The filmmakers, Sumo Science, used a mobile phone and a microscope to capture the tiny animated movements. I was impressed to see the filmmakers show their creativity and patience while making an inch-high girl come to life.

That's not the only world record exhibit shown at the Mid-America Museum. I got the opportunity to witness a demonstration of the World's Most Powerful Conical Tesla Coil. The Guinness World Records certificate from August 29th, 2007 states, "The most powerful coil is the Tesla Coil at the Mid-America Science Museum in Hot Springs, Arkansas, USA, which produces 1,500,000 volts of electricity." During the demonstration, electricity was transmitted wirelessly lighting up a neon sign showing the name "Tesla." The mighty caged lightning had my jaw dropped. The raw power was intimidating. My senses were heightened with a little fear, however, I would have never guessed I'd be mesmerized by the sight and sound after a few short seconds. The inconsistent fire bolts caught my eyes with the rapid movements in the 2.5 ton steel cage. The cage is there to protect its inquisitive viewers such as myself. As I watched the bolts, the noise of the power sounded like a high buzzing vibration; enough for me to definitely stay indoors during the next lightning storm. 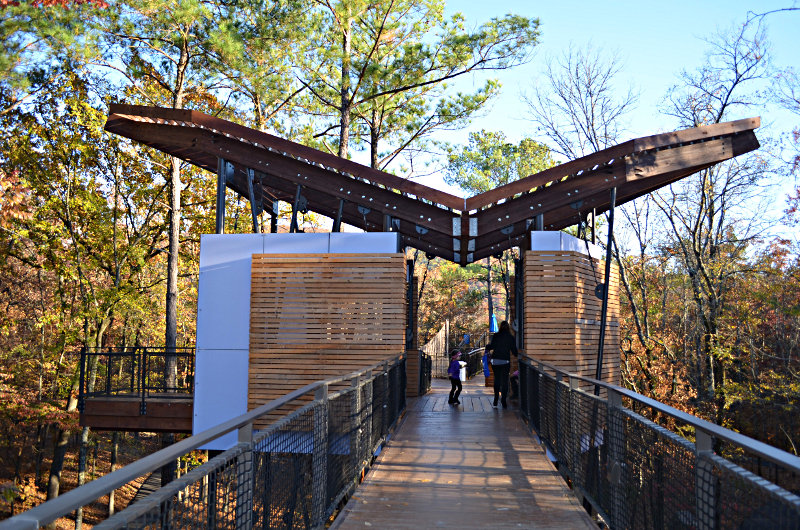 The skywalk extending from the building's second floor.

I came across a skywalk extending from the building's second floor at about 40 feet above the ground. While I walked across the wood beams, among the multi colored leaves, I approached a tree house overlooking the arboraceous Ouachita Mountains. On the tree house pavilion I could see a large rope net in the shape of a circle built into wooden planks. Children were running and playing tag on it. Despite my fear of heights, I too had to get on the net. I told the young visitors to clear out as I rolled down the netting, stopping in the middle of the circle. I peeked through the ropes and saw the tranquil streaming waters trickling down the side of the mountain. The water was crystal clear and looked refreshing. The children joined me as they were curious to see what caught my attention. I admired the wonderment of the perfect nature from several feet in the air. 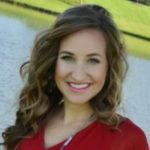 Andrea Albino is a freelance journalist, contributor at In The Know Traveler and Editor in Chief at The Luggage Tag, where she documents her recent travels and explores the greater Houston area. She believes families should not wait to travel and the time is now!

Andrea is married with two active little girls. When she is not writing or planning adventures she is an active member of the community as a school volunteer and youth sports coach.

For about travel in USA

Tabasco Tourism to be Reactivated