The MÃ©xican state of Oaxaca (pronounced wah-HA-kah) doesn't just sound exotic to my ears, the name inspires thoughts of the mysterious and unusual. Located in Mexico's deep south, the state's name taken from a Nahautl word 'huaxycac' literally means nose of the juajes and refers to this tree's bloom fruit. It's said that this bloom must be respected and ingested over time, and with care, as its depth and spice are not for the timid. 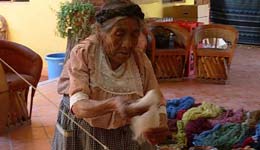 Linguists generally agree that there are 16 distinct pre-Hispanic languages spoken in the region, but ask the locals and they will say there are 50 languages, or 72 languages, or more.

Perhaps more than any other MÃ©xican state, Oaxaca lives and breathes its ethnic diversity and historic traditions. It may sound counterintuitive, but a great way for visitors to experience Oaxaca's history is to go shopping. I'm serious. Go shopping. I suggest taking a day or two to visit the artisans in the smaller towns in the Valley of Oaxaca. There are numerous places within forty minutes of Oaxaca City each with a distinct product and flavor.

TeotitlÃ¡n del Valle is known for the gorgeous hand woven rugs made in almost every home there. I visited Bulmaro Perez Mendoza, the accomplished master weaver and designer at Father and Sons workshop where the family has been making rugs for nine generations. There I witnessed the rug making process from beginning to end. Maria Pilar, Bulmaro's ninety-two year old grandmother, who stands four and a half feet at a stretch and speaks only Zapotec, demonstrated how to card wool for spinning. Father and Sons is one the few workshops that continues to make rugs dyed with only natural pigments and Bulmaro demonstrated how pomegranate skins produce a light green color. He then crushed a cochineal beetle, the parasitic bug that feeds on Nopal Cactus, in my hand and mixed it with a bit of lime fruit acid to create red. My hand was stained for the rest of the day, but it was a great reminder of how Oaxaca's economy once thrived upon the crushed guts of a beetle. The bug guts create the world's strongest natural red dyes and were first exported around the world during the Spanish Colonial period. Today there are cochineal farms where the beetles are cultivated. Bulmaro weaves these reds into both his original and more traditionally inspired designs, many of which take their cue from the Zapotec symbols found at Mitla, a nearby archeological site.

San Bartolo Coyotepec offers the chance to experience ancient traditions with a more recent evolution. This town produces a large quantity of barro negro, the famous Oaxacan black pottery, and the place to visit here is the AlfarerÃ­a workshop owned by DoÃ±a Rosa's family. Black pottery has been produced in this area for longer than anyone can count but DoÃ±a Rosa found a way to give it a shine. She developed a technique where hardened but still unfired pottery is hand burnished by rubbing a piece of quartz across the surface. This neat trick gives the pottery a soft luster after it's fired. For those in the market for black pottery search for the faint but telltale lines left by the burnisher's hand. Visitors at the AlfarerÃ­a can watch DoÃ±a Rosa's technique as well as see large pitchers and vases hand thrown on wheels constructed by centering and placing the clay on top of a plate that has been placed on top of another upside down plate. It's an interesting improvisation of a potter's wheel and it's been in use for at least a thousand years.

Friday, visit OcotlÃ¡n de Morelos because the large open-air market is in full swing. It's not considered appropriate to bargain in the artisan shops, but bargaining at the market can be fun. Cooks will find a wide array of dried spices colorfully displayed and the more adventuresome might enjoy trying a handful of fried chapulines seasoned with lemon or chili peppers. What are chapulines? Before domesticated animals, they were likely the region's main protein source — they're grasshoppers. What do they taste like? I could say “like chicken,” but that wouldn't be true. I'll leave this to the imagination. If grasshoppers don't sound appetizing perhaps a corn based cup of tejate, might be more refreshing.

After the market, a trip down the street to the Aguilar Sisters' shop offers the perfect dessert for the eyes. The Aguilar Sisters' brightly painted clay sculptures depicting prostitutes, the Virgin Mary as well as fantastical creatures and humorous situations have achieved international fame. Each of the four sisters has her own style for portraying life in contemporary Oaxaca. I've previously seen their work presented in galleries located in both Taos and Santa Fe, New Mexico. Yet visiting the sisters' workshop homes adds a new dimension to the experience. Collectors will find that purchasing the work here costs about a third of what it does elsewhere.

Shopping the Valley of Oaxaca is like taking the first bite from the end of the juajes' tree fruit. There's an expected richness but the layers and flavors go deeper than initially imagined. Music, food, dance, archaeological sites, and Oaxaca City's famed zÃ³calo still wait.