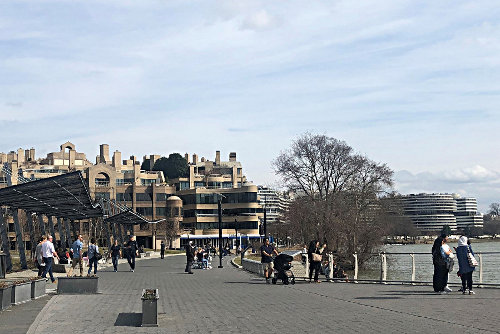 Washington D.C., the capital city of the United States, brims with iconic memorials and monuments, and showcases the art and culture of the USA through the vast museums of the Smithsonian Institution. A tourist can easily be overwhelmed visiting these extraordinary landmarks. So if one wants a slightly more laid back feel of this powerful city, the best place to experience that would be in the neighborhood of Georgetown. A National Historic Landmark District, Georgetown winningly blends the past and present which gives it a distinctly separate identity from the power corridors of the capital. Founded in 1751 as a port city on the banks of the Potomac River, Georgetown is named after the then King of England, George II and it soon became a prime shipping center before being integrated into the new capital of Washington D.C. in 1789.

I reached my Georgetown hotel by taking a taxi from Washington D.C. but realized quickly that walking would be the best option to soak in the local air. After settling in and with the sun still shining in the late afternoon I decided to get my first feel of this neighborhood. I barely took a left turn from my hotel and immediately felt as if I was in a fairy tale land. Little did I know that I would have a repeat occurrence the very next day when I would visit a historic house. But more on that later.

I was on a cobblestone street with gorgeous houses lining either side. Their glistening clapboard facades of sunny yellow, robin's egg blue, blinding white, sedate grey and earthy brown gave out a dreamlike vibe. Each home had a distinct persona although they all exemplified the classic Federal colonial style of architecture with elaborately paneled, brightly colored front doors, pilasters, carved moldings and cornices and rows of symmetric windows.

Soon I was on the campus of one of the most renowned universities in the country, Georgetown University, founded in 1789 as a Roman Catholic and Jesuit college. It was early evening and all around me students were going about their day, some probably running for an evening class while others were busy with their laptops and phones, sitting on one of the numerous benches that dotted the lawns and still others were lolling on the grass with their friends enjoying the last moments of receding sunlight.

In front of me was Healy Hall, the symbolic architectural representation of the university. Very much Victorian Gothic in style, what immediately draws your attention is the massively tall spire that rises up and out of the building giving it a very old world feel. The building is named after Reverend Patrick Healy (1783-1882) who became the first African-American President of a major university and the hall was constructed during his tenure.

Georgetown is that neighborhood of Washington D.C. where you can visit the oldest building of the capital city still standing on its original foundation. Built in 1766, the Old Stone House is just that, a house made of stone that was home to a middle class family originally from Pennsylvania who traveled here in 1764 to start a better life. So yes I would definitely propose history buffs to visit this place which comprises of a single room with a brick and stone fireplace and interesting tidbits of photographs and information about the history of the house. I spent a delightful few moments in the English style garden to the back of the house before deciding to visit the next attraction.

Along Wisconsin Avenue, one of the main thoroughfares in Georgetown, stands Georgetown Lutheran Church, the oldest Lutheran congregation in Washington D.C., here since 1769. The present building with its grey stone faÃ§ade was built in 1914 though the original church was constructed of logs. The pretty little garden in front of the church had just begun to bloom with daffodils and it was not hard to imagine that it would be truly beautiful once the weather warmed up some more.

Not too far from the Georgetown Lutheran Church, is the Tudor Place Historic House and Garden, another must see sight and my destination the next day. The site is a National Historic Landmark and was built by and home to six generations of descendants of Martha Washington, the wife of George Washington, the first President of the United States. It was erected between the years 1805-1816 by Martha Parke Custis Peter, a granddaughter of Martha Washington and her husband Thomas Peter, the son of Robert Peter, a prominent Scottish born merchant and Georgetown's first mayor. The house, one of the finest examples of the neoclassical Federal style, was designed by William Thornton, the architect of the first U.S. Capitol.

Surrounded by about five acres of landscaped gardens dotted with stone paths, fountains, gazebos and other garden structures, it was easy to visualize that the garden would be enchanting in late spring and summer but for now I was more interested in the interiors of this grand house. I bought my ticket in the little gift shop at front as it is only possible to see the house on a guided tour. Our docent was visibly surprised at the eighteen people who showed up for the tour and called us an unusually large group present on such a cold day. We began our tour learning about the history of the house and its occupants who lived here until 1983. The next hour was expended looking at the fabulous furniture, knick- knacks and art collections of this house that truly made me feel as if I was in a European palace.

A View of Dumbarton House in Georgetown ©2019 Susmita Sengupta

Down the street from Tudor Place is Dumbarton House, another excellent example of Federal style architecture. Built in 1799 by a merchant from Philadelphia, the house today is a museum showcasing Federal period furnishings and decorative arts. The house is important historically as it was the place where Dolley Madison, wife of President James Madison, retreated to on August 24, 1814 after the British burnt down the President's House during the War of 1812. But what I truly found interesting was the exhibition at the house highlighting the use of science, technology and mathematics in preserving historical monuments. There were displays explaining how antique frames are preserved, how wallpapers are redone and paintings conserved.

I wanted to round off my itinerary of visiting house museums by going to Dumbarton Oaks, an estate with a museum and a historic garden about a five-minute walk from Tudor Place. I discovered that since 1940, it is a Harvard University research institute with a library but that the museum was free to visit. The museum focuses on Byzantine and Pre-Columbian art along with a few displays on Western Medieval and Renaissance art that were collected by Robert and Mildred Bliss, the final owners and founders of the Dumbarton Oaks Institute. It was absolutely fascinating to see the Inca, Aztec and Mayan craftsmanship illustrated through weaving, gold metalwork and carving. And for me, it was an icing on the cake to walk through the Philip Johnson designed Pre-Columbian Pavilion where the South American artifacts looked like floating ephemera in large, cylindrical glass galleries. The Music Room with its sumptuously designed Renaissance style ceiling and walls covered with tapestries brought French chateaus to my mind.

But what Dumbarton Oaks is actually famed for is its garden, designed by Beatrix Farrand (1872-1959), a pioneer in landscape design and the only founding woman member of the American Society of Landscape Architects. With warm weather still distant, I had to be content with just getting glimpses of this skillfully designed formal garden. Come summer I could imagine it would be a pleasure to spend time in the 27 acres of lush land filled with flowers, running fountains, terraces, winding pathways, kitchen gardens, orchards and a plethora of garden ornaments.

The Kennedy Center for the Performing Arts ©2019 Susmita Sengupta

Lastly, I would recommend visiting the Georgetown Waterfront Park with the gorgeous vista of the Potomac River, Key Bridge and the Kennedy Center for the Performing Arts. I walked over to the park to rest my tired legs and did not regret my decision. After a bit of rest, I strolled along the waterfront, watching a lone kayaker, a women's rowing team practicing their moves, and a flock of ducks paddling along in the Potomac River.

It brought a perfect close to my short stint to explore this charming and historic neighborhood of Washington D.C.

Advice on the Authentic Experience part4